But I still got the yarn...

Reading Fiberjoy's weblog last night (link on this page) I noted that she'd suffered a dogbite recently. Last December I was in the mountains of Southern Poland for a weekend and was attacked by a large farm dog which gave no warning but came silently from behind and bit my leg to the bone. The local people were lovely (except for the farmer who had disappeared without trace), the hospital was lovely, the police were kindness itself, whisking a heavily-bandaged me and DH back up into the hills to identify the culprit who was then taken into veterinary observation (no, not the farmer, the dog, although I think they interviewed the farmer fairly seriously for the rest of the weekend) for the regulation 3 weeks of rabies watch. Crawling round with a gaping wound crimsoning the snow wasn't what I'd intended for the trip, but it wasn't going to make me miss my yarn opportunity. There was this wonderful open air market in the little town, where everyone was muffled up to the eyes to sell local cheese, handcarved bread boards, knitted sweaters and socks, and - yes - skeins of gorgeous homespun wool from local (and presumably happy, if they hadn't met my dog acquaintance) Polish 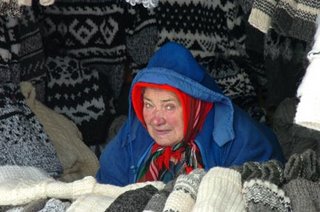 sheep. So as soon as the police and nurses had let me go, I limped back down to the market, leaning on DH's arm, and bought a whole kilo of Aran-weight pure wool in a dark charcoal. Cost me 25 zlotys which is about six Euros or seven-ish US dollars. Only then did I allow him to pilot me to a cosy little bar where we were introduced to the local winter specialty - tea with black cherry vodka. It's exceptionally warming and restorative - remember we're talking about an invalid here - and you feel quite chipper until you step outside on the homeward run and the fresh air hits you. DH claims I sang rebel songs all the way back to the inn where we were staying but I think that must have been somebody else. Didn't contract rabies, thank heavens, and got my wool home safely. Was it worth it? Well, I think so. In any case, I have now got over my fear of strange hospitals and unexpected tetanus shots for good, which has to be a plus - and I have the anticipation of making up the yarn into a really nice Aran sweater for DH who had to put up with the whole thing when he would have much rather been out photographing the wildlife. Here is the yarn at the centre of the tale. 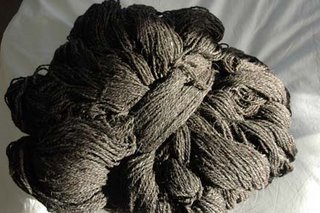 A whole kilo to play with - that's 2.2 lbs. for the imperialists among you - and it still smells definitely of those contented Polish sheep as it should do. We Irish like our wool to retain a smidgen of its origins - it's better at keeping off our soft rain. I shall have a lot of fun working out what patterns to use. The idea is to use those which reflect the intended wearer's interests. Since DH loves nature and the countryside, blackberry stitch, honeycomb, cables for winding pathways, will certainly be in there. I might try this new-ish idea of starting some of the cables right from the rib stage instead of waiting until the bottom band was done.

Having discovered Fiberjoy's husband's site - jenkinswoodworking - also linked on this page - I now lust after the glorious needles and crochet hooks he makes, as well as the Turkish spindle for which she has created both an instruction book and a video. Then I thought something looked familiar about the spindle and I rummaged among my old images to find this one of a busy Buddhist monk in Ladakh about twenty years ago. 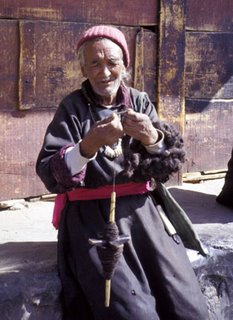 I imagine his was definitely home-made too. You can see the similarities can't you? And I love the way he has wound the rough fleece round his arm. I asked everywhere in Ladakh where I could get one of these but got surprised looks. One man with a few words of English finally said firmly, 'But this is for you to make. You do not buy such things.' I was duly chastened. Ladakh at that time (hopefully still) was a much more self-reliant community than most of us have come to be. Anyway I'm determined to get my hands on one of Jenkins' spindles.
Posted by Jo at Celtic Memory Yarns at 6:36 pm

You had quite the adventure in Poland. How's the dog bite now? Has it affected how you react to strange dogs? I never used to be afraid of dogs but now I get a bit alarmed when a strange one approaches.

Thanks for visiting our website, the kind words, and links! I have to clarify that though the DVD was finished,(really, it was finished) but the truth is, I couldn't stand it. So it was trashed with the goal of producing a much better one. The filming will take place in my neighbor's garden next week. (A much pleasanter place then the scene of the last attempt.)

Interesting to see the picture of the monk in Ladakh with his spindle. I'll have to show it to Ed. When I first learned to spin I coiled the roving around my arm in the same way, and I still show people to do that when I teach.

I'm looking forward to seeing what you make with the Polish yarn you bought.

I think we have another Yarn Harlot here ...great story ! Is that the Tatra mountains where they have gorgeous felted clothes ? I know they don't wear them all the time ( more's the pity) .I'd have been really scared about rabies but you are still here so that's okay.You certainly do travel Jo .I have a gorgeous picture book of Tibet ,did you get any felted boots ?

I am sorry you had such a bad introduction to Polish dogs! My family live nearish to Krakow and take in many strays, all of whom are sweeties! Cherry Vodka can heal many ills though!!!