What A Wonderful Woolfest!

Back safely after a wonderful couple of days. Only across the Irish Sea in Northern England, but it was all so much fun and so full of lovely experiences that the memories will last for a long time. The trip around Northumberland and Durham deserves a posting to itself, so that will be kept for tomorrow. Tonight's is all about Woolfest, which was held at Cockermouth in Cumbria. 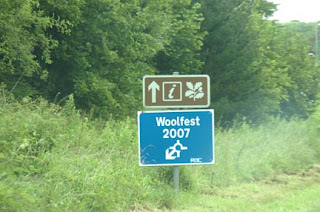 There were several delightful aspects to this event. In the first place, it was held in a huge and practical arena which probably serves as a cattle mart during the rest of the year. It was spacious, airy, and had a pleasant air of the muddy outdoors about it - as far removed as you could imagine from the stuffy claustrophobia of London events. Even the people attending were sensibly attired in outdoor gear, with not a pair of high heels in sight - not when I was there anyway. It was a pleasure to walk around with lots of fresh air and glimpses of blue sky at intervals, and to see live sheep penned in comfy stalls among the professional stands.


Secondly, it had the most marvellous range of things to see as well as to buy, with lots of people demonstrating how to make felt, peg rugs, knit socks, spin yarn, shear sheep - there was even a Norwegian demonstration of nalebinding or netting-knitting - that last is my term, not theirs, and apologies to those of you who know more about this ancient technique than do I. Got a leaflet on it, and will try, although I fear the intricacies of winding loops around your thumb are going to escape me when there isn't a kind instructor on hand.


And thirdly, and most amazingly for me, I met so many friends! People I've been corresponding with over the past year, people with whom I've exchanged so many confidences, swapped so many hints, but never seen in person until now. 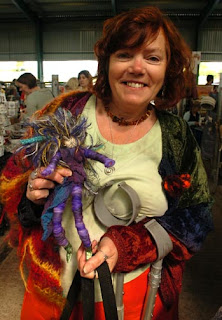 One of the very first people I met was none other than Ambermoggie, dear Amber! It seemed as if we'd always known each other - indeed we recognised each other outside the building, on the way in! She's holding the most marvellous spirit figure which she had made and brought for me. How did she know the colours of the jacket I would be wearing that day? But then, I shouldn't have been surprised. These things come naturally to her. Amber, it was so lovely to meet and hug and talk. The first of many meetings.


And then I had to seek out the stand of someone with whom I've been exchanging frantic yarn-based emails for ages - the lovely Andy Hammand, probably the last supplier of undyed yarns in England. 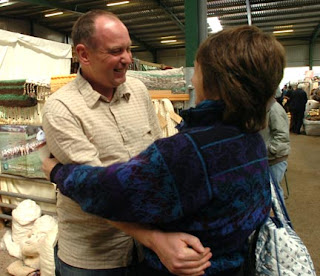 Andy had brought along some amazing yarns to Woolfest, including a particularly nice wool/nylon sockweight which is a perfect match for any Opal pattern, as well as some divine rovings. 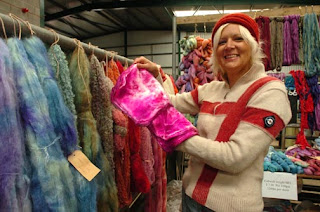 Right next door to Andy was the effervescent Jenni of Fyberspates (and how she creates those colourways in her yarns I will never know).

A few aisles over, I finally tracked down Natalie of The Yarn Yard. I was one of Natalie's first customers when she started selling her superb hand-dyed yarns on eBay, and we're firm emailing friends now, but we hadn't met until Woolfest. 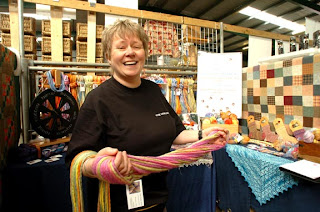 Here she is, showing me her mouthwatering new range of organic hand-dyed yarns. These are so gorgeous you just can't resist them. Go look at her site and you'll see what I mean.
And I still wasn't done with meeting friends! Checking through the delectable glitter cones on the stand of my old acquaintances, Uppingham Yarns, I was hailed by none other than Jo - or, as I have to call her in the interests of clarity, UK Jo (that's why I now sign my comments Jo at Celtic Memory Yarns, so you won't confuse us). 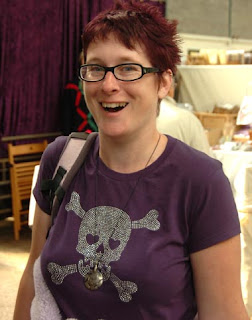 Since we'd never met in real time before, I asked, somewhat bewildered, how on earth she had recognised me. Jo just laughed and said, 'For heaven's sake, there you were, standing with your arms full of yarn cones, just like in your blog picture - who else could it be?' Lovely girl - and do you see that great skull and crossbones, with a bell on it? Super-cool!
Oh the stands, and the stalls, and the sheep, the things to see and the THINGS TO BUY! 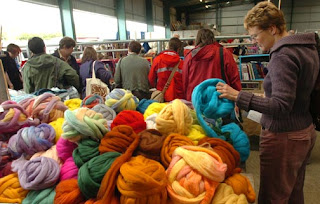 Rovings in every colour of the rainbow. 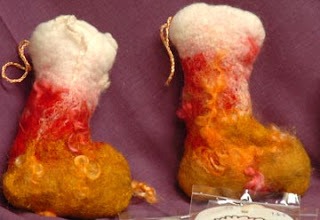 The most adorable tiny felted boots. 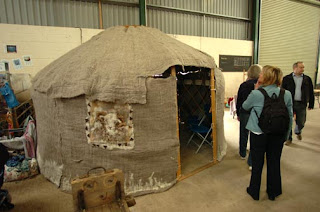 A full-sized yurt with felted panels (felt was really big in every way at Woolfest).
Remember the discussion on sock machines a few postings ago? 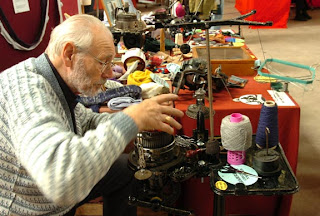 This wonderful gentleman collects them, mends them, advises on them, and generally keeps the craft alive and well in England (no, he wouldn't sell any of his, and I don't blame him. I wish he would, but I don't blame him). 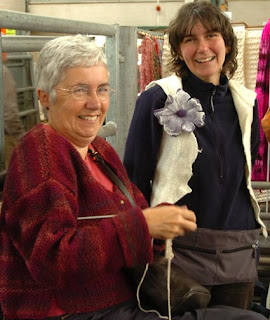 Look at the great jackets these two stallholders are wearing? 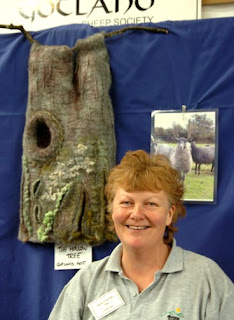 and the amazing wallhanging made by Nickie Kirkby who keeps a flock of rare Gotland sheep. 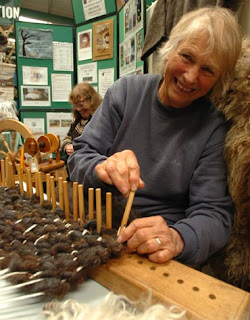 I was fascinated by this method of making rugs with pegs, string and raw wool. Got to try that! 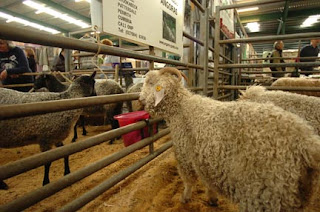 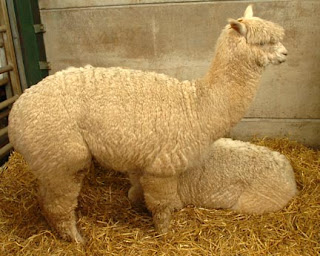 and a pair of ultra-dignified alpacas (wouldn't you just love to bury your hands in that coat?) 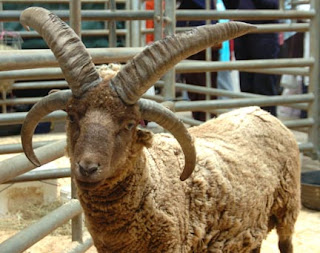 and even a very rare Manx Loghtan (presumably there are no narrow gateways or low washing lines on the Isle of Man).
Stayed far longer than I had intended, but eventually tore myself away to find Richard (who had retired to the nearest hill to search for birdlife) and head back to Northumberland.
What did I buy? Not all that much really. A few books - one on knitting ganseys, one on freeform knitting and crochet, one on feltmaking. A wraps-per-inch thingy - don't really need it, but it was so nice to see it freely available that I indulged. Some serious cones of merino-tencel sockweight from Andy Hammand. 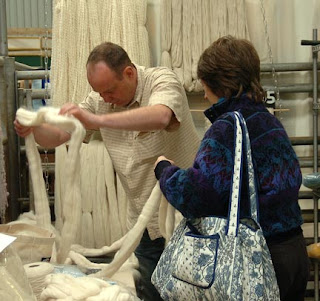 And, as an extra treat, 100g of baby alpaca roving.
(As a postscript to this, when my bag was going through the security check at Newcastle Airport the next day, the woman watching the screen looked perplexed, hesitated, and then asked me, 'Is it loaves of bread you have in there?' I hastily explained that it was another essential of life, yarn, and she nodded. Doubtfully, but she nodded.)
It was definitely, far and away the nicest wool event ever. And we went on having a nice time for a whole second day before we had to catch the plane home. But no more tonight. Tomorrow I'll tell you about the wild splendour of the Durham moors, Hadrian's Wall in Northumberland, and a haunted inn where - but no. Wait until tomorrow!
Posted by Jo at Celtic Memory Yarns at 11:12 pm

What fun!! Mostly seeing all the blog-friends, and finally seeing Amber's sweet face.
I have files in my email, one is UK Jo (she IS quite the lovely lass) and the other Celtic Jo.
What a delightful bounty of fibre goodness!
ps...I ALWAYS know where the kettle is... ;^)

Sensory OVERLOAD!!!!! How fun. What a joy to meet all these people. Can I come with you next year? It is just the sort of event I would love.

Cool! What fun seeing pictures of blog friends!!! :-) Almost felt as though I were there from the moment I saw the picture of the lush countryside to seeing the sweet faces of friends.
Thank you Jo CMY!

Cannot compute! Too, too much input. And all that roving, like a rainbow collapsed into a bin! And Amber's face, finally! And that magnificent Manx ram! He looks like an old Celtic god, he does.

I need a yurt. Seriously. I would love to have a yurt. A yurt, with all my wool inside, and a comfy chair and my spinning wheel.

THANK you so much for the virtual tour and all the blog-faces!

ARGH! I have to wait til tomorrow...all those hints. Just read a book about pre-Arthurian Britain, actually six books in a series...novels, of course, but Hadrian's Wall figured in them...will be eager to see photos...

When in the Fall will you be in New England? THere are several Sheep and Wool Festivals here during that time to take in, depending on the when.

Sounds like, and looks like, the Cumbrian one was pretty great. It was interesting to see the Manx Loghtan (sp?)...He looks like an all brown jacob sheep, though the nose is slightly different. You can see some of my jacobs on my website...maplehilljacobs.com. But you've probably seen many of those before.

I love that you met all those folks you've been in contact with. I know it was grand to meet you in person, if only for that short time, last month in Ireland.

Looks like you had great fun. Would love to get to Woolfest one of these years!

I really don't know how you managed to be so restrained with your purchases. I think I'd have gone totally mad with all that lovely yarn! ;-)

You had a most excellent adventure too! How lovely to meet up with all those friends and what a large variety of interesting techniques.

I'll bet some dying adventures are up next for you. ;-)

Wow - you said everything that I wanted to say about Woolfest only much, much better!

It really was the most marvellous experience.

Thanks for taking me along to Woolfest! Will Ambermoggie's spirit figure be a help with felting? I only asked! Maybe you can give us a closer view, as it looks wonderful!
That is a great bag you are wearing Jo, and perfect for carrying the 'essential of life' for a knitter!

Oh, Jo, there is just so much to read and look at! How wonderful! And I love hearing about and seeing all these amazing people, what fun! :0)

I adore your posts - the photos, the chattiness of the event, the fun that seems to leap out of the photos! It looks like you had a ripping good time, love!

What fun you've had!
I come from the Isle of Man so I 'claim' the Loghtan as my own. Aren't they great?

Such great photos Jo , you have captured the day perfectly,alas my camera packed in so I am glad to see your piccies. I am so sorry that we missed each other at Woolfest and there on the same day too :( I should have mailed you before we went to Scotland ah well next time we WILL meet at some point I am sure and remember there is always Colinette ;)

I have no doubt the energy you bring to your written adventure comes from the intermingling of all those knitter spirits. I can feel your excitement, see the wonders and hear the companionable chatting. I adore going on armchair adventures with you! And you are such a tease....

You are realy great
Yarn

Sounds wonderful! There will be a next year I hope! I am going!Thanks for sharing your visit!

I read your blog often and enjoy it immensely! after reading the woolfest post I felt like I had been there! Thanks for a great treat. I look forward to hearing about the rest!

Thanks for all the details and the photos. Will try to go next year.

I am so glad I discovered your blog. All the greenery makes me yearn to visit Ireland again. Here in Rochester, NY, everything is parched - hardly any rain and it's 95 outside right now. I love the green colorway and especially the pic of the waterfall. I will be visiting again!