Last day of the trip! Up to last night I was hating the idea of leaving this beautiful part of the world but now the green fields of West Cork are calling me home. I'm beginning to think of the autumn leaves lying thick on the grass, waiting to be raked up when I take the dogs out in the morning; and roses to be pruned, and the long twining strands of the hop carefully cut and kept for winter decoration. And, yes, I too am thinking about midwinter (or Christmas if you prefer) and the things I'm going to make for friends. Little red or green stockings with small memories of where I live tucked inside - scented leaves, an acorn, things like that which won't annoy the postal system too much. That way we can exchange echoes of our own lives across oceans and continents.

It's been a lovely journey and we have met so many lovely people. Seeing Peg face to face was something I'll never forget and it's made me eager to do more weblog connections as I'm sure it has made Peg too. And the breathtaking scenery and wildlife along the way in this vast beautiful country - I'm very much aware that we only touched on the tiniest spot in just one province of Canada. Did I ever post that picture of Pyramid Lake at dawn? No time to check just now, so I'll put it on, in case. 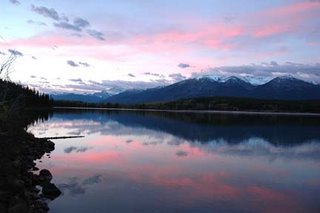 To be out there in the cold dawn with just the cries of birds for company was a wonderful experience. It makes me more determined to use those early and late times of the day more instead of huddling by the fire with my knitting. If Lene can do it, so can I!

(And by the way, if you've been noticing that I haven't been putting the proper links to my favourite people and weblogs, it's because I'm not on my own machine and thus don't have access to my quick checklist. How do you do it? There may well be a short quick way to put on the code for links but what I do is keep a document open on my screen with all the correct coding for each, and then just cut and paste each time I want to mention one of you. Do tell if there is a much quicker way!)

But the stash, you cry, how has the trip stash progressed? Well, yesterday I finally got to Beehive Wools in Victoria and it was well worth the waiting. 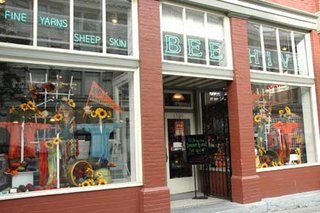 DH went off to see what he could find around the Inner Harbour so I had lots of time to myself. 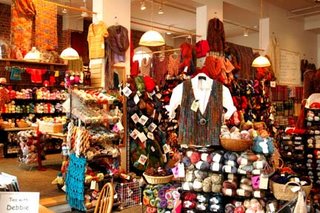 Inside it was such an Aladdin's cave that I didn't know where to turn first. Alleys, corridors, separate rooms, all with their own dizzying displays of yarns, loosely themed by fibre content. Of course I headed first for Fleece Artist, which had a section all to itself. Heavens, I didn't know she'd expanded into so many different fibres, from silk to merino, homespun to blends. And all in those glorious inspired colourways. 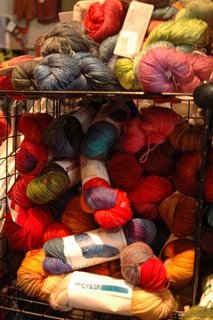 In fact the elusive Seasilk was here, but only in a few colours and not the one I particularly hoped to see face to face as it were - a very pale, almost white or cream with just a few smudges of colour on it, like the hint of lipstick on a well behaved young gel's face. None of the others inspired me to immediate heartstopping passion, which is what I have forced myself to use as a guide at this stage. But the pure silk - oh heavens, that was a different matter. There was a skein of blues and lavenders which reached out with its tiny hands to me and let me lift it into my basket (oh yes, I had a basket by this time). And her merino sock yarns! Did you ever see such fun? In the end I chose one which had so many daft colours that the socks will stop traffic at a hundred yards when they're done. Plus some Brittany birch dpns to match (in gauge at least) the Lantern Moons I got earlier, so that I can continue Grouchywif's excellent practice of making both socks at the same time. Oh and a whole wheel of White Buffalo soft roving which they were selling off for $1.95 because it was one of the last. How could I not at that price? It will felt beautifully and it's a very pale green which will overdye just fine to darker, I think (if I can get those dyes this afternoon in Surrey).

I know you'd like to see pictures of the loot, since that's part of the fun for all of us reading each other's weblogs, but there simply isn't time what with the frantic packing and keeping an eye on the ferry timetable. I promise I'll post as soon as I'm home. In compensation, here's one of a charming building on Government Street. Can you see the 'Irish Times' sign on the left? Clearly put there especially for me - how thoughtful of Victoria. 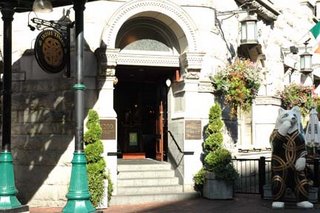 And here's one of the cutest little houseboat I ever did see, down on Fisherman's Wharf... 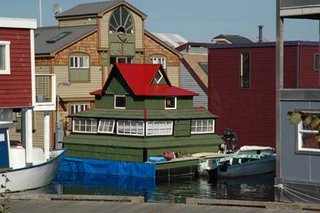 R has just cleverly taken a picture of the Glitz sock to remind me that it's time to go. I'll sign off with that (should get the socks almost finished on the flight, with luck). Next time I post, it should be from my own study, overlooking the trees and hills of West Cork. Today we cross to the mainland at 11, and then dash to Surrey to find this shop which sells a good range of fibre dyes (plus Best Buy for DH to stock up on computer bitsies) and then hastily repack the cases to ensure nothing sharp, toxic, cosmetic or otherwise threatening to life and limb is left in the hand baggage. We fly out at 7 tonight, so spare a thought for us crossing the Atlantic as you slumber! Then Amsterdam for most of the day (hey, where are the good yarn shops in Amsterdam, I wonder?) and finally into Cork at about 9 pm tomorrow.

It's been lovely having you along on the trip. Like a huge friendly gang outing. Can I come on one of yours too? 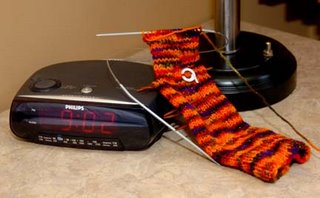 Posted by Jo at Celtic Memory Yarns at 4:36 pm

Have a safe trip home and I hope you find something interesting or fun to do in Amsterdam.

Have a safe trip home and I hope you find something interesting or fun to do in Amsterdam.

Have a safe flight. I have been to Beehive in Victoria and loved it. I am eager to go back and check out some of the other shops you visited.

I love that Houseboat..always liked the idea of living on one or a Romany caravan.

Safe journey, Jo! Glad to hear you enjoyed your time here in BC :0)

Thank you for taking us along on your trip, and safe home. It'll be lovely to have you posting your own beautiful surroundings again, and of course the full vacation stash disclosure.

So when are you planning to come to Toronto?

Jo, it's been a lovely trip and one hellofa ride. I'll be keeping you both in my thoughts and dreams for safe keeping over the 'big water' and to home and hearth.
I prefer 'midwinter'.
In the meantime will be patiently waiting to see all the goodies you gathered...hunting and gathering...oh what fun!

hmmm Amsterdam - beer and mussels with frites maybe? Or chocolate to take home hmmm yarn I don't know but maybe you have enough and want to stock up on chocolate you know combine the good things in life ;)

It's been a joy to travel with you. DH has enjoyed the pics, too. Amsterdam - the Anne Frank House and a canal ride, as per the advice of my DD who traveled there with her Grams via Elderhostel.

Ah, Jo--I love you right back! I've had a wonderful time on your trip with you, and am wishing you safe passage on your trip home. The pic of the lake at dawn gives me goosebumps. You asked about a pattern I'm using--the Samus sweater is available at knitty in the cardigan archives. It has the Saxon braid at the bottom edge of the body and the cuffs and I'm just so bewitched by it! Looking forward to your next post.

Jo, I hate good byes, so I won't say it - we'll be in touch. J was mentioning stopping in Ireland when we head to see our DD in Germany next spring/summer. Wouldn't it be nice? I so enjoyed your visit and I am so pleased to have a new bestest friend in my life. You are one of life's treasures. Remember, if you need more stash, I would be more than happy to help. Love to you both from an admiring bestest friend and her DH.

I have followed you every step and been there to all the yarn shops as well! But really there is no place like home. Welcome to the old world.

I have loved reading about your trip and shopping vicariously with you. Hope you have an uneventful trip home.
A beer along the canal in Amsterdam sounds good to me.

It was a lovely journey. Thanks for sharing.