The Delight of Friends Sending Gifts!

Gosh, I didn't expect the new yarn to sell out overnight on eBay! Took me by surprise. I hadn't realised so many people felt a pull towards the ancient Celtic festivals but Samhain evidently rang a few bells. Here's a whole tray of skeins ready to be packaged up and sent off. 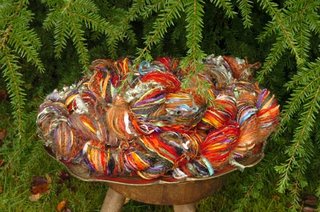 I always spend ages trying to squash the yarns into the tightest possible compass, squeezing out as much air as possible, so they'll fit into a resealable plastic bag and then into a padded bag securely. That way I can be sure they'll make the journey safely, and I know they'll spring out full of life at the other side, but I still hate to see them packed down tightly. They're free yarns and don't like being controlled. Yes, they all had a slice of thickly-buttered barm brack before setting out, so they'll be fine on their separate voyages to their new homes.

Thank you, thank you, thank you for all your kind commiserations on the recent yarn tragedy. No Angie, it wasn't blood. It was far far more serious. I mean, what can be more serious than shredded cashmere? I haven't had the heart to tell the mother cone and haven't had the heart either to wind up some more double thickness balls for getting on the with Red Sweater KAL. The event needs a few days to mend, to merge into the background. Muffy has been spending a lot of time under her cupboard since that little contretemps (little!) and I can hear the steady sound of clicking needles, but so far I haven't been able to pinpoint what's missing... And the heartbreaking comments I got from some of you (Jill, Vicki and others) about beloved pets now alas gone, for whom you would willingly trade every inch of yarn just to have them back, made me choke and give all my girls an extra hug (Muffy pretended she wasn't that impressed, she said I made her drop a stitch, but she was quite pleased really).

One or two of you wrote to say that Jamieson's of Shetland are indeed delightful but won't sell to the US or Canada. I've come across this with several places - one of my own favourite sources in the UK (Uppingham Yarns) doesn't even post to Ireland officially, only I rang them up and gave them a hard time (plus my credit card details). 'It's the postage,' explained the Uppingham director and Jamieson's said the same. 'Americans and other places far away won't pay the postage from here.' Why? I mean, why do they think that? Listen you guys, New World knitters are quite used to paying postage - they see the yarn, look at the costings, make the choice. So do it! This is a global village and if you want in, you'd better realise that.

Rachel H. sent me the most lovely surprise gift the other day. Isn't she a darling? Just look at these delights. 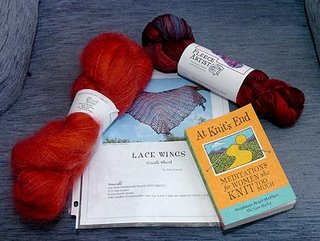 They all emerged beautifully from their tissue wrappings, one by one - a divine skein of sockweight from Fleece Artist, a superb mohair blend from Wellington Fibres - a Canadian producer I hadn't even heard of - by heck do you have a big country over there! - and that marvellous pattern by Alice Cooley for a shawl using just ONE skein of Seasilk, that everyone talking about. Plus - plus - plus - you see it on the right there, don't you? A SIGNED copy of Steph's classic.

What can I say? A copy signed by the woman who not only made me laugh uncontrollably and unstoppably but also gave me a new outlook on life and knitting - made it okay for me and for millions more to yearn after yarn, knit around the clock, start new projects every day, and know that it was OK. Best of all, who introduced us all to her and to each other thereafter, through weblogging. Go Steph, go! (And if you're reading this, take a rest, girl. Producing a book is worse than twins, worse than the flu, worse than a serious operation. You need time out to spoil yourself and get the elasticity back in life's rubber band.)

Rachel, you are the world's number one sweetheart. And I am already putting the pennies in the piggy bank to get to the Knitters' Frolic in Toronto next spring. To think of meeting up with you and all the other webloggers I've got to know through the Net - how great would that be?

You know what this reminds me of? A magazine called (I think) Sixteen, of which stray secondhand copies would find their way somehow to Cork in my early teenage days. It featured something called American Bandstand (bear with me, we didn't have all that much in the way of New World culture to get excited about back then) which was, I assume, a TV show with pop music and regular attendees on the dance floor. These regulars became minor stars in their own right, being interviewed and featured on the pages of Sixteen about their fashions, tastes, friendships, that sort of thing. And Sixteen then started a feature about a young girl who moves to wherever American Bandstand is recorded each week and actually gets to join in - to meet all the regulars. Wow, was she ever excited.

And that's what going to events and meeting other webloggers is like for me. You read and laugh and empathise from far away, and then one day you get to meet face to face and it's like old friends. I've said it before but it bears saying again - weblogging is a far greater force than is yet realised. We'll look back in old age and think, 'Hey, we lived through that - we saw it happen!'

A propos, I'm going to meet Julia at the Dublin Knit & Stitch Show on November 2! She's coming over from California and she's bringing me some dyes, the lovely helpful girl! Hope they don't get snatched at customs. They shouldn't - the Irish authorities would probably be fascinated to hear all about the process - they're like that. Still, fingers crossed.

Oh heck, got to go. Interview a road sweeper and then go to Die Fledermaus at the Opera House tonight. Love that show. Talk to you later.
Posted by Jo at Celtic Memory Yarns at 1:24 pm

Jo - you took me back a year or two to 'Sixteen' magazine. Oh how exciting to have the magazine hit the shelves and pour over every word and picture. Sorry, but I still cannot find your yarns on ebay - will keep trying. Cannot believe that the sources in the UK and elsewhere feel that we in North America won't pay postage! We'll pay it if we want something and we are used to paying sky high postage here in Canada!!

Jo, where did you get those yarns in the bowl (the first picture)? They are delicious. Are the available in the US?

Hard to believe there are any business folks who don't think there is across the pond business and plenty of it.Most of the D.V.D's I ordered were from there not so long ago. These big silver birds take off all the time . Steve Reevis forgive me I wasn't taking the ...eerrrrerrr ...sorry Jo!..who knows where that came from so I'll avoid it "pulling your plaits" lovely as they are.

Jo, you lucky thing, you! What a lovely gift! I do so enjoy that book... I like to dip into it here and there. Such fun!

Oh, that divine Rachel H.! I know I'm not the only one who wishes she blogged.
Jo, the skeins of Samhain are stunning, much more appealling than a bowlful of cherries, eh?
Jamieson sells only to yarn shops in the US ...at present time...the postage issue puzzles me though, for individuals...I didn't find it that painful at all to post to Ireland.
Looking forward to hearing all about the Dublin Knit&Stitch show, it's closer than you think...Nov. 2.

Wellington Fibres is WONDERFUL. It is a small-ish operation run by a woman who is kind and generous with answering any questions you might have. A year ago, as a new spinner I had a thousand questions about fibre and drafting (is it draughting? I never know. American spelling is like crumbs - it gets everywhere!) and she patiently answered my questions, gave additional suggestions and recommended a certain fibre for spinning. It all turned out wonderfully and I make a point of visiting her booth at the Knitters Fair each Autumn.

And darn it! Sold out?!! I wanted some of your yarn. I'll have to be faster next time.

People will figure it out sooner or later. I have an Aussie friend who emails me and says, "I have such-and-such posted to you from Amazon.com, could you send it on?" The first company to make global shipping cost-effective will rule the world.
I hope your little dog has sufficiently recovered. (I once came in to find mine rolling in a skein, although it was only acrylic, so it wasn't so bad.) I wonder if she liked the softness of it, or maybe it still smells a little of the animal kingdom? Probably not to your nose, but maybe to Muffy's. Anyway, she's a sweet little thing who's probably worth all the cashmere in the world, right?

I ordered from Jamieson and Smith, over the phone and they shipped to me in Canada. First they sent me some brochures and so forth in the mail and I used that to order from. Trying through e-mail didn't work. The phone was the way to go. The call cost me less than $2.

I was at the Knitter's Frolic this past spring. Maybe I'll see you there next year.

Why would they think we wouldn't pay for international shipping? I have books shipped from litriocht.com all the time and books are a lot heavier than fibers.