Island-Hopping Is Just GREAT For Yarn-Hunting!

Oh that was such a great trip over to Quadra and Cortes Islands, off Campbell River. If I have to spend the next year in dire gloomy straits, meditating over a bowl of thin gruel (what is gruel anyway, I always wondered when I read A Christmas Carol - and that reminds me - but no, leave it till later in the year), it will have been worth it. We were rather relaxed about setting off as Fun Knits didn't open until midday, and barely made the 11.30 ferry for the ten-minute ride to Quadra.

Isn't it great arriving at new islands? The little wooden houses peering out of the trees, the tiny tidal beaches, the sense of another, more secluded world? 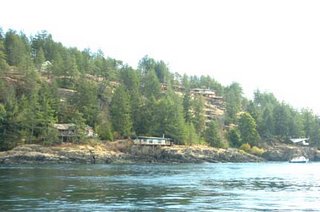 It actually took a whole lot of time to find Fun Knits, which was tucked away on a side road (they're going to move into the mainstream shopping area though soon), and then I discovered that they'd actually been open since 10 that morning! Two hours of yarn hunting wasted! 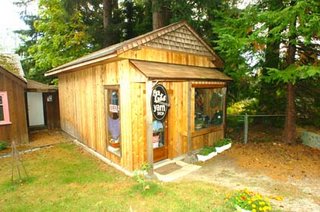 It's the most divine little shop, packed full of yarn and, on this particular Saturday morning, people. 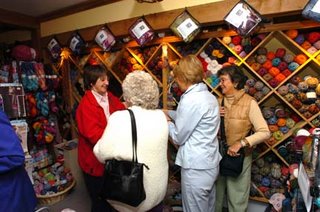 As I rushed in, anxious to make up for lost time, I was greeted by a chorus of 'Are you Irish?' This took me aback for a moment until Donna (mother of Shelley who was over on Cortes Island for the day at a knit-in) explained that her daughter had left notes about my impending arrival and instructions that I was to be treated well. Wasn't that nice? Here's Donna herself, coping with a shopful of madwomen very calmly and good - humouredly. 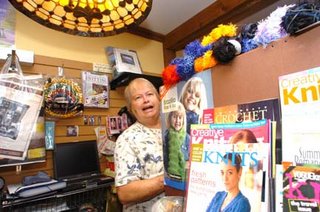 The crowd of ladies in there were from Qualicum, further down the island, reconnoitring for a spinning and weaving retreat they're planning to hold there in the spring. They were lovely friendly folk, and one, who I think probably had more than a trace of Irish blood, insisted on dancing a jig with me to celebrate the occasion. 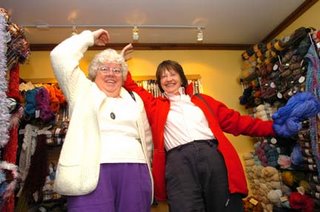 We tore ourselves away (Richard was having great fun capturing all these images) to catch the Cortes ferry. Oh of course I didn't leave empty-handed! This place has Cherry Tree Hill and Sweater Lady and Fiddlesticks and the most gorgeous sock yarns... Tell you further down.

Cortes has very few roads and was rather quiet as we drove around, with hardly anyone or anything to be seen. Since petrol (gas) was getting low we decided to head back for the ferry - but then spotted this poster on the island noticeboard. 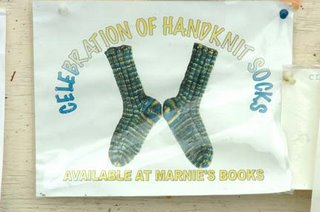 Now could you resist that, whatever the ferry timetable? Nope, neither could I, so off we went on another treasure hunt. Finally we ran Marnie's Books And Homespun to earth. 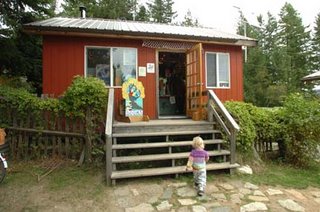 It's the quietest most charming little place with books and woolly things jostling for space. And there, hanging proudly on their own rack, were the socks! 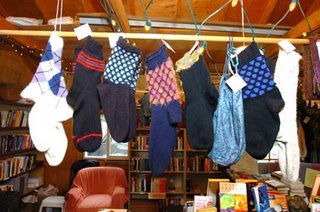 Did someone really knit that argyle pattern on the left. Hats off to whoever did. I think it was Marnie, who however wasn't there that day (probably at the same knit-in as Shelley). There were wonderful bags of alpaca for spinning, cones and skeins of homespun - and this... 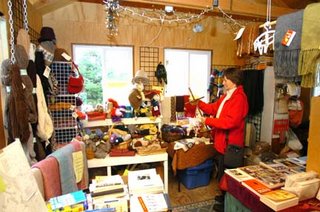 The most beautiful handmade niddy noddy in a dark polished wood with a little peg to keep one arm in the place you wanted. How could I resist that? DH, the adorable, bought it for me on the spot. No, of course I don't deserve such good treatment but I wasn't going to refuse such a gift.

Then it really was time to rush for the ferry back to Quadra, drive across that island and catch the boat back to Campbell River. While waiting to board, Richard found a belted kingfisher perched casually right next to the boat, almost as if it knew he had to leave and couldn't get out tripod and long lens. He didn't do too badly though. 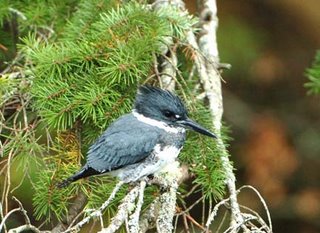 He swears that the kingfisher winked sardonically as the ferry slid inevitably away from his perch. The one that (almost) got away!

So here's the haul from Quadra and Cortes. 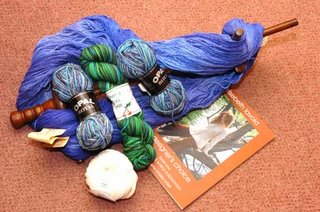 Not much, you say? In yarn size, maybe, but in credit card punishment, quite enough for one day! At the back, on the niddy noddy, is a huge skein of hand-dyed silk/wool from Fiddlesticks which will be wonderful for trying out that Swallowtail shawl in Interweave. On it are lying two balls of Opal variegated sock yarn with a hint of glitter, and one of Cherry Tree Hill in emerald greens. OK, so Cherry Tree Hill are disgracefully expensive and I should resist them, but I can't. In front is a ball of Online wool/cotton which I am going to use for Aran swatch experimentation since it looks as though it would give just the right sharp stitch definition. And there with this bundle is Elsebeth Lavold's Viking Knitting. ONE of you - you know who you are, although I can't check right now with my time on this laptop limited - threw down the gauntlet on this one and I couldn't believe I'd found it right there in Fun Knits.

Now when R had done that picture he said, 'You can't just leave the niddy noddy like that, they'll want to see it in more detail.' See? He's getting involved! So he took another one of me holding the beauty. 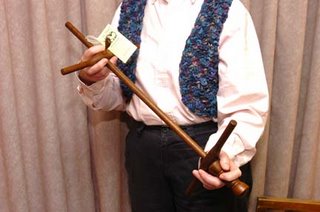 There is a very ergonomic handle at one end, and a dear little peg on the arm at the other so you can size to suit different skeins. And yes, I'm wearing the Campbell River vest, finished on the ferry crossings. About time you saw something I'd finished, yes? Really really simple, since the yarn is telling the story here. Oh the niddy noddy - it's labelled Cortes Island Homespun - Wonderfully Woolly Things and the price was really incredibly reasonable. What a day of discovery! No, really really I will endure a long damp dark winter with gratitude and contentment, I promise, I promise. (Still two days to go, though...)
Posted by Jo at Celtic Memory Yarns at 4:24 pm

So many gorgeous little yarn stores ..can Canada be real or is it all a dream ?I know they have much colder weather but even so they still seem to have a dis-proportionate amount...oh land of my dreams !

The book you have is lovely too of course, but I doesn't have the cable reference that the other one does.

The island seemed like a wonderful place for an adventure. And who would think that such a small place would have such gems of yarn shops! Your husband is a real sport for supporting your hobby the way he does.

I believe I can safely say that we're all becoming a bit smitten with your Richard. What a guy! and I just know you deserve all his goodness and support. Love the kingfisher photo!
What a glorious time you are having, I'm terribly envious (and grinning ear to ear for you) and yes, your long dreary months ahead will be well equipped with wondrous goodies to keep you in good company.
What lovely little yarn shops, just tucked in here and there.

Your Campbell River vest is lovely btw, so very clever to just whip that out.

Just loving your Canadian posts, but want a photo of Richard now. Your island yarn havens sound like fairyland. Can't believe I did the islands and missed the yarn shops. Adore Elsebeth Lavold's Viking books. Planning to do something from there in her Silky Wool which has superb stitch definition.

On a practical note, that skein of Fiddlesticks will do a much larger shawl than the Swallowtail as written, see Debbie's own Lotus Blossom Shawl, or probably Icarus. Or you could enlarge Swallowtail which works quite well (can help you there).

Have you found any Fleece Artist? And Koigu, my fave for socks? Keeping fingers crossed for the next couple of days.

Love your wonderful vest, what a "souvenir" of a beautiful trip.

Gruel is a thin porridge made with oats, or corn or barley or even just plain flour and water (yuck)

As long as you have enough tea or coffee and a little chocolate to go with the gruel as you are knitting up all these wonderful memories all will be well - right?

As usual great pictures - I believe the kingfisher gave R a big wink....

So glad to hear you had fun! What beautiful yarn, and that's a great niddy noddy :0)

Jo, Jo, thanks for telling me about my own part of the world. You can be sure we will visit there and soon! Love the vest - send a few details when you are resting over the gruel!! You certainly don't let moss grow under your feet. I knew you would fall in love with Elsebeth Lavold too! Cheers dear girl and to you too R. and by the way girls, he is really a handsome man, but he is definitely Jo's man! Keep your hands on the knitting needles!!

What a cute little store! And I really love that pic of the kingfisher. Which pattern in the Viking book?

So sorry I missed meeting you Jo but I am glad you had fun at the store and visiting our Islands. I had a wonderful time at the knitting retreat.
Shelley

Jo, I love the photo of you dancing in the yarn store--I don't doubt for one minute that you grab life by the scruff of the neck (as you wrote on my blog)! And how lovely is that vest? Can't wait to see how the fiddlesticks knits up. Hugs to you and that sweet man of yours!

looks like your having a grand time. My only question is are you going to have enough room in your suitcase for all that newly accquired stash??

Wow, I need to go on vacation to Canada and check out all of the yarn stores. Totally jealous about Richard, I could never drag my husband into an LYS. Give Richard a big hug, he is wonderful.