In Which A Thorn Tree Points The Way, And A Small Bird Prefers Wool To Moss

I meant to tell you last time, but there simply wasn't space. Which is why there will be a blue moon tonight, as Celtic Memory is posting again within the space of a week. Well it's not just to put in the extra bits - it's also to avoid that awful feeling when it's been let go too long, and the stories to be told, and the pictures to be shown, have piled up so high that even the thought of sitting down to post for several hours is appalling. No more. Nevermore! Going to post little and often from now on. Did I say that once before? Twice before? Anyway, the lovely story I meant to tell you last time. We had been out in North Cork on a job and were wandering home through the lanes when I bethought me to look out for lone thorn trees. This of course is for De Next Book. Of all the trees, the hawthorn possesses the richest folklore even today. You'll know the old song: All night around the thorn tree The Little People play, And men and women passing Will turn their heads away. But if your heart's a child's heart And if your eyes are clean, You need never fear the thorn tree That grows beyond Clogheen. Hawthorn comes into bloom on May Day. Or it would if the powers that be hadn't decided to change the calendar from Julian to Gregorian time back a few centuries ago (no, I'm not going into the details now, Google it if you want to, it's quite complex, involving the loss of ten days, then a change of mind, and a loss of eleven days instead, plus, believe it or not, a Feb 30 in 1712 to get it all sorted out finally, only it didn't.) So unless it's a particularly mild year, the lovely, milky-scented white blossom stars the hedgerows around the second week in May. (It's also why Twelfth Night or Women's Christmas is still celebrated, but that's another story.) You wouldn't believe how cross people were at having eleven days just snatched out of their lives. I mean, wouldn't you be? Go to bed one night, planning to plough and harrow tomorrow, plant the potatoes the day after, take the wife to market the following weekend... and then suddenly you're told 'sorry' (actually forget that, the Church never said 'sorry', wasn't its way) 'dem days are gone boy, you're going to have to hurry to catch up, you're almost two weeks behind in your work now.' Where the tarnation was I? Oh yes, the thorn tree, the fairy thorn. It's believed to possess considerable power in its own right, and also to be very much connected to the Good People. Of all the sacred wells and springs in Ireland (and we have thousands) the majority have a thorn tree growing next to them, and you'll usually find little scraps of cloth, yarn, offerings tied to its prickly branches. To damage a fairy thorn or, worse still, dig it up, is considered very bad luck indeed. And often you will see a lone thorn right in the middle of a wide ploughed field, because no farmer with any sense of tradition would dare to touch it. If you find a lone thorn growing on the edge of a rath, a lios, or fairy fort, of course, then it's doubly magical and doubly dangerous to lay aggressive hands on it. So as we were driving along, I asked DH to keep an eye out for just such a lone thorn, so we could get pictures of it. And then, over a hedge, I spied one that wasn't particularly typical, but would do for the moment, so we stopped in a farm gate. The farmer wandered out for a chat, and we explained what we were doing. 'Oh the thorn,' he said. 'I thought you were coming to see the stones.' The stones? THE STONES? What stones? 'Ah, it's The Sessions they call them. Never did know why, but that's what they've always been called.' 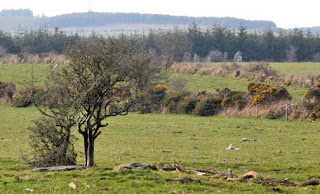 Look at this picture of the thorn tree. Look back there in the distance, slightly to the right of the thorn. See some dim grey shapes? Flipping 'eck, I had no idea whatsoever that they were there!

Up the lane with us, through a gate, and across a long field, never mind that the sun was setting. And gradually those strange grey shapes became larger, more definite. 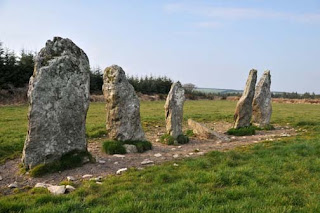 Gosh, they were big. Six originally, you can see one fallen there, fourth from the left. 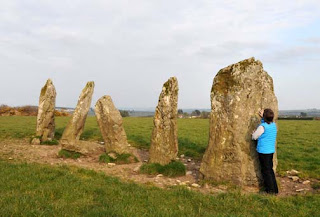 Here you can see the height of that end stone, the heaviest and widest of the six. Of course there is probably as much underneath the ground as there is above, so their original height would have been awe-inspiring indeed. A genuine stone row, but for what purpose? Leading where? Marking what?

Looked it up in the records as soon as we got home, where the name appeared as An Seisear or The Six. Maybe we misheard the farmer. That name would make more sense. Well thank you, thorn tree, for pointing the way. Wouldn't have spotted them without you. Yes, Celtic Memory is ashamed of herself for not knowing about An Seisear, but then, there are so many stone rows, stone circles, lone standing stones, within a stroll of home that you can't be knowing everything, I suppose.

That same day we'd passed through the lovely little village of Bruree just over the border in Co. Limerick. The name means The Seat of Kings, and certainly the kings of Munster used to live here in ancient times. It was a gathering place for bards and poets too, once or twice a year. 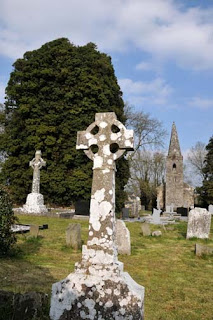 That ivy-covered bulk rising above the old graveyard is actually the medieval de Lacy castle, though it's not particularly recognisable. The stones and the ivy are probably old friends by now, holding each other up. 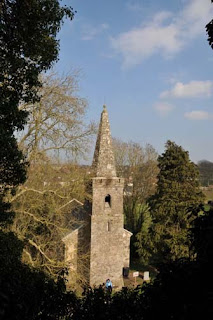 While I sat on a bench in the sunshine and dreamed of the past glories of Bruree, DH climbed nimbly up the old castle and took a picture of me, far below. Wish you'd all been there with us.

Sock Madness is proceeding apace, with the Norwegians beating everybody in terms of sheer speed. I simply do not know what they have for breakfast in the far north, but I certainly can see why the Vikings were so successful. Didn't hang around wondering about life, simply seized it with both hands. 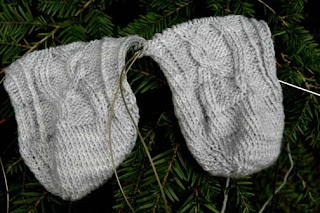 I'm not as fast as that. Here are my Dangerous Turns, designed by the clever Maya. Love cables, and these are delightfully mirror-imaged. Using my own hand-dyed merino/bamboo in a colourway called Swirling Mists. I'd say they'll be a couple more days yet in the making. Also working on the Irish Mystery Shawl by Meagheen, which will take a lot longer, having lots and lots of stitches, not to mention those diabolic creations, nupps. But a gorgeous design, nonetheless. Using a beautiful Cashlana from Fleece Artist for that, in mossy green. Pictures when there are some worth showing.

In the meantime, I am glad to report that it is not only we humans who appreciate fine wools and the soft warmth they offer. At this time of year I usually put little handfuls of wool or dog hair out on the bushes for the birds who are busy making their nests. 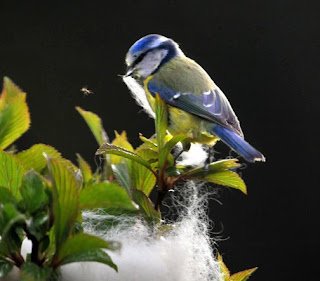 Bingo! A bluetit (chickadee to you New Worlders) forthwith ceased his busy gathering of moss from the hedgerow and came straight up to investigate. 'Ooh, wool', he squeaked. 'Lovely, just what we needed for the babies. The wife will be pleased!' And he tugged and tugged energetically. 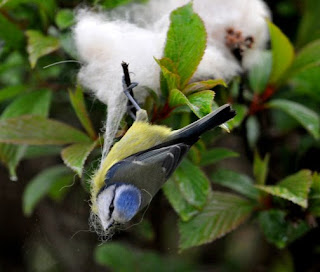 He hung upside down, determined to get the longest draw possible on the fibres. 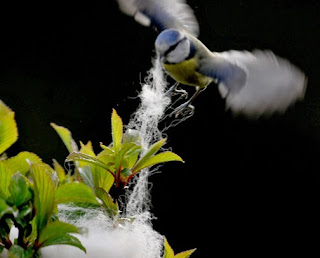 And finally he hovered, wings beating vigorously, pulling the strands up, up and away, before flying victoriously off with his spoils. Isn't it nice to think that little nests will be cosy and warm in West Cork this spring? Go on, do the same. Put out dog hair after you've groomed out the winter undercoat. Do as my mother always did: hang a little net bag of yarn ends, scraps of wool, bright colours, from a branch, and then have fun in the autumn seeing the well-used nests which have incorporated your offerings.

Enjoy the spring. I gotta go finish some socks...

Posted by Jo at Celtic Memory Yarns at 9:12 am

Thank you for posting - what a delightful way to begin my day!

Lovely, Jo, and well worth waiting for.

Oooh, pretty bird! our New World chickadees don't have any blue at all -- at least not the kind we see here in the mid-Atlantic region. Black caps, gray backs.

What a lovely way to begin the day and the week! Jo, I need to go to Ireland. Yesterday.

It's lovely to stroll (in a virtual fashion) the lanes with you and your DH - the next best thing to being there.

Yes, I do throw my yarn snippets into the bushes in our yard. Brightly upholstered birds' nests in our neighborhood, I can tell you.
-- Gretchen

Digging much cat hair out of trash and taking it out to spread on the bushes right now!!!! There are some yarn snippets, of course, but Persian undercoat is just so cushy.

How lovely to find your thorn tree which pointed you to the standing stones. Some things are just meant to be.

Oh, my chickadees don't have blue either. Jealous.

I LOVE witnessing your world. Thank you so much for writing and sharing. Happy Spring! :o)

Thanks so much for this great posting. And the answer to why those trees have all the bits of cloth in them. I've seen some, but never really knew why.

As for the love of stones, my husband understood my natural attraction to them (as an Irish American) and his present to me one Christmas was having a lovely stone wall built for our back garden. He likes it too now, so I guess some Celtic is rubbing off on him.

Thank you, Jo! How nice to take a walk with you, through the stones and back to the garden.

What an absolutly delightful post Jo. I enjoyed every minute spent reading it!

Always a treat! Thank you!

In the spring I always put out bits of skirted fleece, or bits of dyed roving, and small snips of yarn laid out by the handful in the crooks of tree branches or on top of dense bushes. In the fall it's fun to see the bright bits of unexpected color up there in the trees.

Had to make a separate comment on the stones. There is more than just chance in how you are drawn to these wonders in your travels, these hidden gatherings of standing stones. I can't wait to see some of them with you in person someday.

And if you ever come here, there are some very special trees you need to meet. Along with some off-the-beaten path delights that most tourists miss.

The photos of the blue tits are amazing. I shall definitely put some fleece out next spring. I am interested in the book you have written. My great grandfather was born in Castletownbere, and his parents are both buried there. We have spent some wonderful holidays exploring the area.

Thank you for taking us along! I was sharing your post with a bird-watching friend of mine. She was also delighted!