Being A Tale Of The Pheasant, The Fox, The Robin and the Rabbits 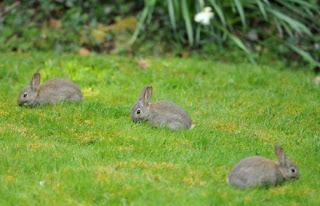 These baby rabbits are too young to know fear. No bigger than the palm of my hand, out of the bushes they pop, to browse on the soft green grass of the lawn. A dog wanders past, they blink at it in wonder. I come by with a rake, and they move a few feet away in respect, but then return to their grazing. 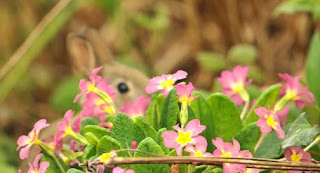 The other morning, one came adventuring right up through the rockery, and peeped in the window from behind a clump of primulas. Next thing you know, they'll be sitting up to nursery tea and wanting stories read to them.


The robins are more careful. They had their nest built, the eggs hatched and the babies being fed before we even realised they were back at the old box in the shadow of the ivy-clad tree.


DH (who is ingeniously clever at these things, whereas I wouldn't even know where to start) unobtrusively set up a camera close to the nestbox, linked to his computer, so that he could sit at his desk and press a button whenever the parent bird appeared with food for the hungry nestlings. 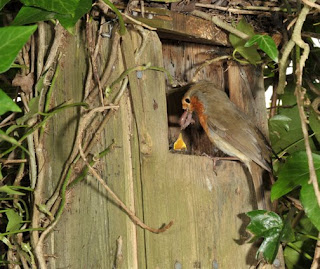 All done without any birds being worried or upset. And, more importantly, without attracting the attention of opportunistic predators like magpies or crows, who would be delighted with a local fast food takeaway. 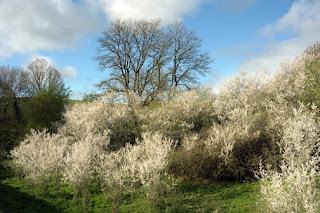 The blackthorn has been amazing this year. The flowers come out before the leaves, usually around March, but with the cold weather we've been having, it was delayed, and made up for it with a really splendid show of white blossoms on bare black branches. There will be a good crop of sloes this autumn. Tongue-dryingly bitter to the taste, with the addition of plenty of sugar and a little alcohol, they make a lovely soothing winter syrup.

It's been a lovely Easter weekend here. Chill winds, but sunshine most of the time. We went out to see what could be seen. 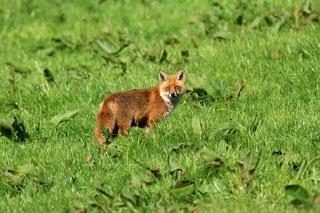 Early morning is a good time to come across someone like this splendid dog fox on his way home across the fields. He paused, watched us narrowly for a minute, then loped off again and was lost to sight in the ditch. Doubtless his poor wife is cooped up underground in the den, dealing with a brood of fractious babies, and with no hope at all of seeing the sun and feeling the breeze on her back for another month yet. 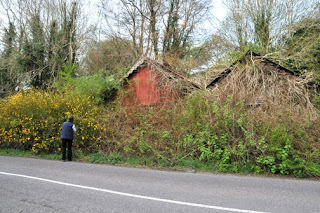 Up the Shournagh Valley there is an old old tin shed that was once a shop for the local community. I've met middle-aged men who waxed sentimental about going in there as children, and buying toffee bars with their hard-earned pennies. (Remember penny toffee bars? I recollect being much addicted to a real tooth-cracker that had peanuts blended in, and was known as Sailor's Chew.) Last time we were here, about five years ago, it wasn't as overgrown as this, but leave a car standing in West Cork for more than a week and the brambles and ivy will have it. The bright yellow kerria japonica, though, was in full bloom, and I took a few slips, to see if they would root in my own garden, and keep the memory of the country store alive. 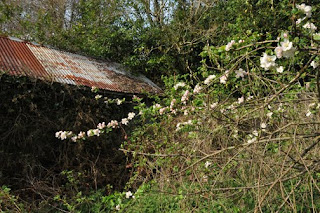 On that previous visit, which was in autumn, we'd climbed a venerable apple tree and brought home bagfuls of fruit in triumph. This time the poor old tree was bent double under the weight of a crushing mass of ivy, but it was still determinedly putting out its blossom on every branch that could reach the light and sunshine. 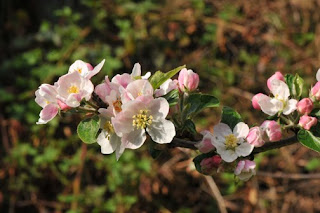 Is there anything lovelier than apple blossom in spring, promising warm summer days followed by a rich autumn? Those selfsame children who bought penny toffee bars here back half a century ago probably sneaked around to the side of the shop in October to pick up windfalls, destined for merry games of snap-apple and bobbing for apples by the fireside at Hallow-E'en. 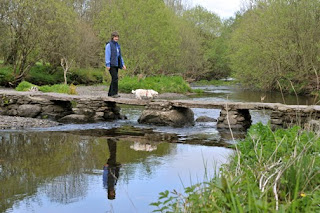 There was an old man, bent over his walking stick, waiting to cross the clapper bridge at Ballingeary as Sophy Wackles and I came over. I apologised for keeping him waiting. 'No hurry at all, girleen, no hurry in the world,' he said in that soft West Cork accent. And off he went, at his own peaceful pace, across the ancient flat stones and into the woods for a stroll. It's a while since I've been called 'girleen', and it made me smile whenever I remembered it during the rest of the day. 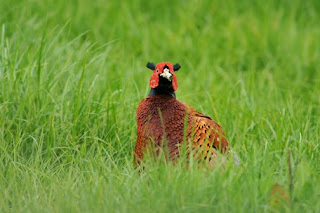 Spotted this pheasant glaring at us from over a hedge, and DH immediately stopped the car to set up his long lens. After some patient waiting, the bird obligingly flapped its wings and called hoarsely, to warn any other resplendent males in the vicinity that this was his territory and no mistake about it. 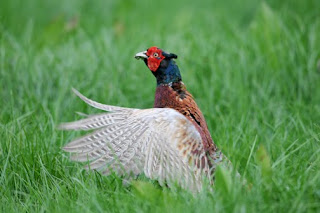 Look at the graceful curve of that wing. Wouldn't you love to create a shawl with that effect? Here, have a look at the full back view: 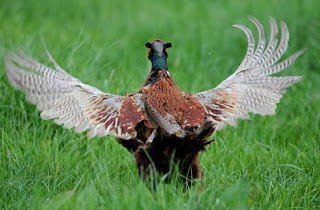 I simply love the way those primaries curve upwards. What little female pheasant in her sensible but boring plain brown dress could resist a man like that?

It was a nice wandering sort of day, with pauses here and there. 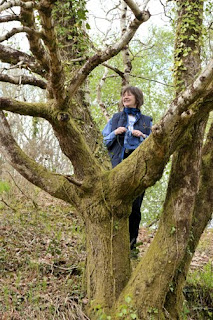 Of course the knitting came too. This was one of those easy, mindless projects that could be dropped down and picked up without too much worry. An Aran cardigan in Noro Shirakaba (never can remember that name, wonder why?), yarn picked up at Knitting in La Jolla simply ages back. 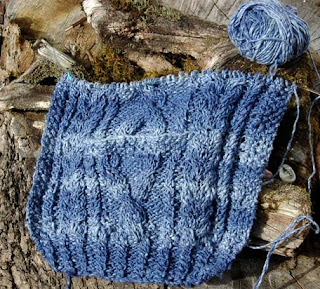 Here is a close up of one of the fronts. I inset a pocket halfway up, where you can just distinguish the little band of moss stitch. It's going very well, but I fear I won't have enough of the yarn to complete the full cardigan. If any of you live closer to a source of Noro Shirakaba than I do (it isn't generally stocked in Ireland or, I fear, the UK) do let me know, and we can do a trade or PayPal, OK?

And then it was time to turn for home. But not at speed. You can't move at speed on the winding narrow lanes of West Cork. 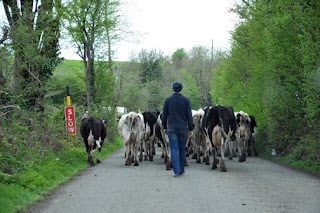 You wouldn't want to hurry tomorrow's milk and cream and butter, would you?
Posted by Jo at Celtic Memory Yarns at 9:33 am

Sigh. Did you notice that his wings curl up into a most fetching shawl shape? My favorite shape for a shawl. Smart bird!

Thanks to starting my Monday relaxed with great photos and writing!

As always, thank you for your great photos and enjoyable writing. Spring is very slow in coming to New England this year with snow even two days ago! Seeing flowers, even a world away is comforting.

Would you share the pattern for the aran cardigan or link to it?

Lovely photos especially the fox and pheasant - amazing. We had rain here on Easter Sunday in Los Angeles which made for indoor eating and egg hunting by the grand kids.

A lovely Easter, Jo. Thank you for those pictures - and storyline, too, of course!

Is sloe gin made from the blackthorn's sloes?

If WEBS doesn't ship to Eire (or it's prohibitively expensive), I can purchase for you and mail.

What a lovely day. Those bunnies are just too cute. And kudos to Richard for the stunning pheasant photos. And the robin-cam set-up. Mr. Fox was just wonderful, too, so self-assured.

The bridge with Sophie Wackles and the stream and the flowers and back-roads were all to dream by.

Girleen is just so charming. It should bring a smile to your face for quite a while. Is it only the old folks who use it now?

Such a lovely day! And bunnies in your yard. Can they be encouraged to leave enough bunny fur for spinning?

My brain exploded as a result of the bunnies. I was due a cuteness explosion.

I love your photos girleen! What a gorgeous old term!:-)Love the knitting!

Spring is coming here too, the birches are green, the lambs are born, the wagtails are back...but we are still waiting for appleblossoms...

Thought you might like to know that the name Shirakaba is Japanese for White (shira) Bark (kaba) and refers to the white birch tree. Might make the name more memorable. I haven't ever seen the yarn though.

I enjoy your blog so very much, the photo walks and descriptions make me feel I am almost there. it's a beautiful area that you are living in. And the knitting is lovely.

Oh, I need a day like that. To enjoy nature and not have to deal with paperwork and insanity.

Your post puts me in the right frame of mind for tackling the the routine of work. Visions of your pictures and thoughts of you will grace my day.

My shop in Seattle carries Shirakaba!

Thank you for a lovely glimpse into your spring.

Thank you for this recollection of a beautiful spring day.

Again, thank you for taking us along on your wandering day. The pictures are lovely and the pheasant flair would inspire a lovely shawl! Have you cast on yet? ;-)

How I wish I could join you for such a magical day.

I am endlessly enchanted by clapper bridges, and I don't know why. Maybe in a past life ....

As always, you make me feel like I am there for the adventure. Someday, I will join you.

Kathy at Knitting Off The Grid said...

I loved visiting your blog this morning all the way from California.

I don't blog myself and most of the blogs I read are fiber related. The delights this brings me are many. I am inspired to go beyond my knitting ability by the beautiful projects I see; I travel vicariously to places I hope to see one day; I laugh,empathize, cry and rejoice with people I only know thru the typed word. My life is enriched.