Think I've nearly got the hang of this now. Thanks to all your good advice, we should be almost getting back to normal. Probably no harm though to post little and often rather than a mega-epic every few weeks. It got so I was dreading the sheer amount of preparation that had to go into first finding the pics on DH's computer, then re-sizing and captioning them, and only then getting started on the posting.

Listen, while I think of it - I got such lovely comments and help, but in some cases I just couldn't get back to the person who I wanted to contact because she hadn't made her Blogger profile accessible. Hey, I WANT to talk to you India, whose father Alvin Tresselt wrote the original version of The Mitten, illustrated by Yaroslava. But you won't let me! This happens from time to time, and I often wonder if the person who sent such a nice comment wonders why I never made contact. Well now you know! Go check that you've left the (metaphorical) door on the latch for me, and the welcome mat out! 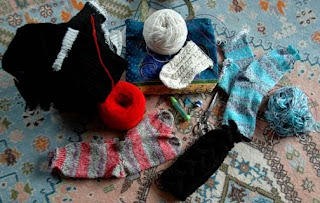 Here we have just some of the gift knitting which had to get done before December 25.On the left several black tubes worked on the sock machine, all awaiting tops, toes and heels. On the right and at the bottom, two pairs of children's stripy socks, ditto. A black cabled headband centre front. And at the back my honeycomb socks in that lovely Cormo yarn from my friend Louise at Tapetes de Lana in New Mexico. Someday I'm going to visit that mill. Anybody been there? Angeluna? You've been everywhere. Glad to get all those gifts out of the way. It is probably the first year ever that I've given more handmade presents than bought ones. It was a very nice feeling, but a bit hard on the neck and back muscles, to say nothing of the hands. How're you feeling after the festive season? (Sorry, Chinese friends, I know you have to wait until Feb 14, we'll share it with you, OK?)

Here is the picture I promised of one pair of the sock-machine-knitted, hand-crochet-finished wristlets drying. They're a great way of using up the leftover sock yarn, aren't they? This was the remains of balls from the Talia's Wings design in this year's Sock Madness (still one of my favourites, YarnYenta!). Must make a few dressy pairs of wristwarmers for myself. I have in mind a really dramatic graceful style with long lacy falls over the hand, in an ivory or silver yarn.

It is time and more, though, that the Polperro gansey jacket was finished. With all the gift knitting out of the way, there is little excuse (since, despite the book deadline, Celtic Memory would be knitting in any case, and if she stopped casting on for new projects, the older ones just might get done). 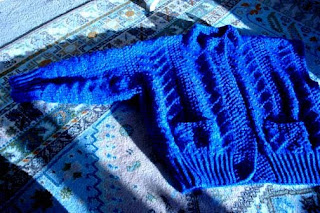 See, only one sleeve to go. After I photographed it at this stage, the needles were indeed brought back into play and the stitches picked up for the final run. But could I get the right number up? Could I heck as like! You see, when I did the first one, I just picked up according to received wisdom (where? Can't remember. Was it Priscilla Gibson-Roberts? Barbara Walker? EZ? Whatever) by picking up on two rows, missing one, and so on, for the distance required. When I got to the second one, after rather a long break over Christmas and all, I carefully consulted the pattern and picked up the number recommended for that. Of course I completely forgot that (a) I hadn't done that for the first sleeve and (b) that if I had, it would have been wrong, because since I'm a loose knitter, I'd done fewer rows to the shoulder than the pattern dictated. Of course I only realised this when I was several long moss-stitch rows into said sleeve and had to work out where the patterning should go.

Frogged back and picked up a second time, basing my calculations on a rapid stitch count of the first sleeve.

Ha! Did you notice the trick word in there? 'Rapid'? Of course I got the sums entirely wrong but also of course didn't notice until I was yet again several rows into the sleeve.


Third time lucky. Now working down the sleeve at top speed, to try and finish before my energy for this particularly long-drawn out project drains away.


(Not that long-drawn out when you consider some of your other WIPs, did I hear someone comment snidely? Back to your cage, you!)

Because once it's DONE, I can start on some of the other wonderful ideas that wandered into my mind while this has been on the go. Do you have those tempting visions during a long piece of work? A glimmering picture of beauty that calls to you, urges you to leave this boring mundane task and fly with it to fibre heaven? Go on, tell me I'm not the only one.


This is one of the projects that is tempting me so much at the moment. I saw it mentioned on - Knitting Daily, I think - and fell head over heels. Bought and downloaded it on the spot (don't you just love the instant gratification of immediate downloads?) 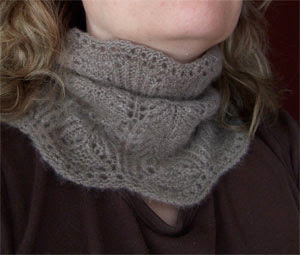 It's the Yarn Harlot's Pretty Thing cowl of course, and really Steph couldn't have thought of a more appropriate name, could she? I recently dyed up some fine laceweight kid mohair in two shades of rose pink and although I have found it really too fine for my mood to work at the moment as a single, both shades used together would look enchanting for this. (Soon, soon, Pretty Thing, only a few more miles to go with Polperro...)


Now with all the hassle over Blogger, you didn't get to share a few things that I was certain you would have enjoyed. Here is one of them, a little late, but still worthwhile.


On the south west coast, not far from Castletownshend (the home of that inimitable pair of ladies, Somerville & Ross, who wrote the wonderful Irish RM books that became a hit TV series - I remember the late great Anna Manahan as the put-upon cook, Mrs. Cadogan, especially) there are three tall standing stones at the very top of a hill. They're some way from the road, and if you catch a glance (it's a narrow winding boreen and you wouldn't want to take your eyes off it for more than a second, if that) you think at first that they must be the remains of construction work. Surely you couldn't get standing stones of that height, up there?

Because it's so far from the road, we kept putting off going up there to take pictures for De Book, but finally came one cold clear December day when wellies were donned and the trek undertaken. The first part is through very muddy fields indeed - thanks to the cattle who followed us curiously at a respectful distance - but then it starts to climb, and the stones, which have disappeared for a while behind the undulations of the terrain, suddenly appear much closer. 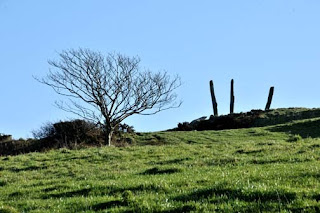 It's absolutely right that the old thorn tree should be there, keeping an eye on them. Bit high up and exposed for the rowan, but the fairy thorn can survive anywhere. 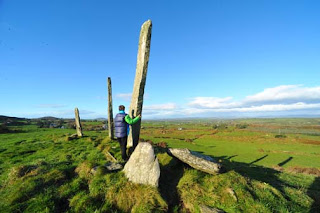 You're a bit out of breath when you get to the top, but isn't it worth it? Look at the height of those stones! Can you imagine what it was like when there was a full row of them? (You can see one or two fallen, and it is recorded that some Victorian Anglo-Irish gentleman in Castletownshend took a fancy to another, and simply had it uprooted and carried down in a cart to his home. Well he'd have had no luck thereafter if he did! Wouldn't be at all surprised if he came to a bad end.

As the sun dropped lower in the west behind the hill, the long black shadows of the stones were cast dramatically on the green slopes below. What an important place it must have been. Probably still is.

Posted by Jo at Celtic Memory Yarns at 5:06 pm

Some girls have all the fun!!! Those standing stones are truly amazing.

How did you figure out the Blogger problelms? I shall have to go back and read through your comments. I've been dreading trying to post again.

Agree with you on the little cowl. Someone sent me a lovely spongy cashmere yarn for Christmas that might just work. But I simply MUST FINISH some (lots of?) things before I dare start another.

And no, I evidently don't get everywhere. I don't know your NM yarn source...yet! Why don't you come next year for the Taos Yarn Festival??? I'm perfectly willing to drive over with Richard and stop to look at birds along the way.

How can you live in all that beauty? I think my heart would break. I too love my queue and the beautiful projects that beckon to me during the mundane moments of finishing a sweater. Your Polperro is fabulous, though, and will be worth enduring to the end.

Love the standing stones and all the photos are always a treat!

I so enjoy your blog, especially your descriptions of your various walks in Ireland. And the photos!
The knitting is fun too.

Thank you and I wish you a Happy New Year!

Thank you for another beautiful walk. Seeing you beside the stones and their shadows rippling down the hillside is breathtaking.

To know their history!

Aah, it's all beautiul, as all your posts are.
Aren't those stones big!!They obviously called you.We hope to get over for a holiday around the Equinox...I shall trawl your Blog for walks.

Nice socks, and it is great to knit for Christmas, even though we are in summer I did knit for all my family.

I don't think anyone has yet suggested using Windows Live Writer to post to your blog. It's a free download and gives you lots of (better!) tools for editing, adding photos, saving drafts, adding tags etc. I've never gone back to Blogger's own tools since discovering it.

Lovely stones and lovely projects. Now you need to do the E word sweater. Mwahahahaha!

Catching up on my blog reading. Love the posts, as always!