Well last night's posting seemed to go all right, so, much encouraged, we'll now try for the next section, shall we? Gosh, it is annoying having to keep to a limit of four images per posting. On the other hand, it does make one concentrate and really make sure they're worthwhile. Rather like the National Geographic photographers being given one day with just one roll of film instead of the usual hundreds, and being told to make every shot count. (Yes, yes, this was in the days before digital, don't be pedantic!) DH finds it very difficult to choose between pictures at the best of times, and now that he habitually shoots off a dozen or more on each opportunity, the hours spent pruning and deleting have increased enormously.

The old road this time, I think, and then, tomorrow, a knitting update. That OK with you? Here we go, then (should one offer libations to Blogger? No. Why the heck should one?) 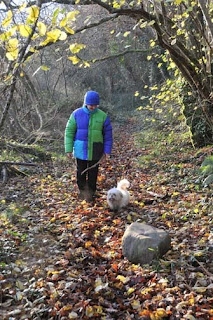 We have had some wonderful still frosty days to follow on that dreadful rain which lasted for weeks, so very early on the morning of the Solstice we took Sophy Wackles down to Coolcower Woods, a part of the flooded Gearagh river valley, quite close to home. 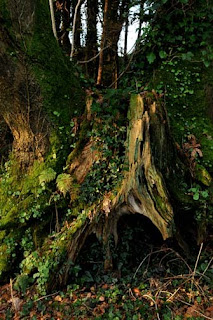 Isn't this a magnificent old tree trunk, still offering shelter and life to so many mosses and ivies and probably all kinds of little creatures who tuck up snugly at night on a bed of leaves within its twisting roots? You can almost see little front doors underneath those arches, can't you? With polished door handles of beechnut, and miniscule 'Welcome' mats of plaited rushes?

Normally we walk down to the edge of the lake and then turn back. But it was different this Solstice morning. The water in this lake is affected by the dam further downriver (the reason the valley was flooded in the first place) and since that dam had released a lot of surplus water during the rainy season the previous week, the lake had almost dried up. 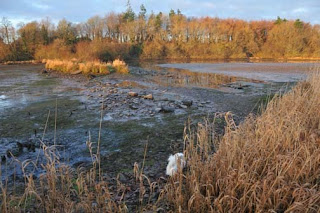 I had never seen this solid ground before. Where Sophy is standing is just as far as you can normally get, right at the water's edge. But on this particular morning, for the first time in many years, the old track was revealed, running across to the woodlands beyond. Those trees on slightly higher ground are normally islanded, inaccessible without a flat-bottomed boat, and even then that's a risky venture with all the hidden tree stumps underwater waiting to tear the bottom out of your craft.

Did we cross? Of course we did! You don't get offered these chances more than once and if you turn them down when they're offered, you only have yourself to blame. 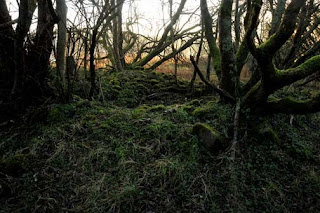 It was strange roaming around and rediscovering the little pathways which were once well trodden by the community that lived in this valley. Trees and bushes of course had grown up over and around the ruins of cottages, old stone walls, and gateways. You could still make out the outline of gardens though, little fields, crossroads. The railway to Macroom used to run through here a long time ago, and we even found the old trackway, minus its sleepers and rails now of course, but still running straight as a die across the bed of the lake. (Oh Blogger, Blogger, why can't I show all these pictures?)

The rising sun was turning the horizon scarlet and then gold as we wandered around this lost forgotten world, and finally lifted itself over the horizon to celebrate the shortest day of the year. 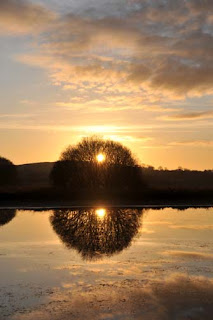 Solstice blessings to you all. Go mbeirimid beo ar an t'am seo aris! That we may all be alive at this time again.

I counted the 5 before I read the post!!! Amazing!

Beautiful. You live in THE most magical place. I think my soul started out there in Ireland - it calls to me.
Jo darling, have you tried uploading your photos to a hosting site like Flickr or Photobucket, and pasting in the code?

gorgeous pics, i love the last one especially
happy holidays!

Wonderful as always and such a treat to read! Love Jan Brett as well and on Revelry there is a Jan Brett group---just a small group.

I to wonder actually about blogging. I have a classroom blog and quite frankly it is so labor intensive compared to facebook. I wonder if blogging will go they way of making your own web pages. I really think the blog folks will need to update their systems or fade away.

Have a wonderful New Year!

I love your description of the little houses in the roots of the old tree. Magical! And I hope you'll be able to get Blogger cooperating for you again. I really love seeing all your pictures.

The photos are stunning and your writing was so beautiful. This post a very special one. Thank you

What a beautiful way to spend the Solstice. It wasn't an accident that the lake was drained on that very day either. Lovely pictures.

While I enjoyed this post, the last photo in this this entry? MAGNIFICENT.

Welcome back! I do enjoy your blog and am always pleased to find another post.
Is the road the same one that you called fairy road in another season? I used that as wallpaper for a time. I love your sweetie's photography.
Your descriptions, his photography; What a match!

I echo what Pacalaga says. I tried the many variations that your posters suggested, but they were all painfully slow. The problem seemed to begin when we switched browsers.

I find that uploading to flickr (where most of them go anyway for safekeeping), and then pasting the code into your blog is the fastest way to go. That way, you can add photos after you write with ease and there is no limit to the number of photos you can use.

Thanks for the trip across to the water locked land of time past. Though I'm only now catching up with you, it tickles my fancy to see that you posted about the extra-ordinary day on my birthday. :-) That last picture is a stunner. You certainly were out and about early on Solstice morning.

The sunrise photo is a glorious one. I am so enjoying reading your blog, I'm going back and reading all your interesting posts about Ireland, its history, and other fascinating info. I once saw a very very old yew tree in Scotland, very powerful they are.