It's been a busy time. Was committed to two parades on St. Patrick's Day so a blustering bright morning found me setting up the trailer at Ballinagree, aided by a helpful piper. 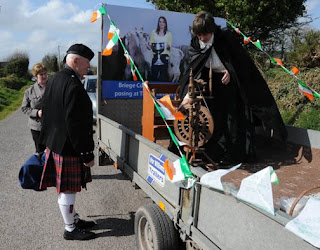 It was the Kromski's first ever public appearance but it took to the open air and the birdsong and the general attention very calmly indeed. And, after adjusting to the stops and starts and bumps, I found it was quite possible to spin the Corriedale as we chugged into the village. 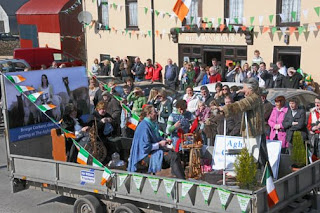 Yes, it's a small place, Ballinagree, but every single man, woman and child that wasn't in the parade turned out to cheer it on. Here we are outside the pub. I'm at the back, sitting on the old wooden settle with Eileen who's crocheting; in the middle are Deirdre with her Ashford Traveller, and Kathy knitting an endless scarf, while in front, standing up, is Sue demonstrating the drop spindle. People really did seem fascinated by it all, and I have lively hopes of resurrecting a once proud Irish tradition, pushed into the background by too-swift progress. 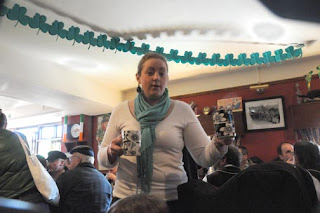 Hey all those of you down there in New Zealand who remember Deirdre with affection, here she is, getting in the warming coffee in the pub after the parade! She's getting married next month is Deirdre, and of course doing all the preparations herself from wedding dress to bridesmaids, so she's got quite enough on her plate, but she turned out for the parade like the good committed spinner that she is. 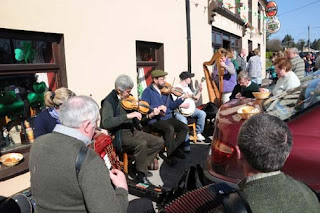 It was lively outside the pub too. We even had a harpist rattling out the tunes along with the fiddles and squeeze boxes and bodhrans. Real genuine traditional village entertainment, not created by PR companies or TV stations at all.
Nora Casey from the Alpaca Stud decided in the end that it would be enough to lead just one young lad on the day, and it's as well she did, since Vinnie, although he started out well enough, decided he'd have a rest right in the midst of the whole thing, and nothing could move him. 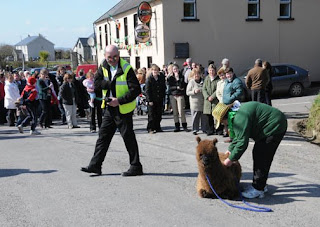 Go away and leave me be. Moidering and messing me about. I'll walk in no more parades this day and that's the truth of it.

Eventually Pat stopped his tractor and came down to lend a hand. They lifted Vinnie into the trailer with all his pals, which is what he'd intended in the first place, and he rode in style to Macroom for the second parade. 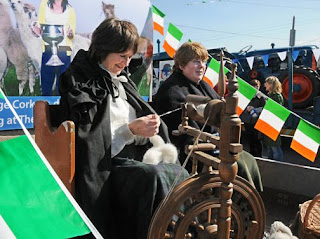 Here we are waiting for the off in Macroom. We were really lucky with the weather - normally St. Patrick's Day is an excuse for a real downpour (not that the Irish climate really needs an excuse, it does it anyway). 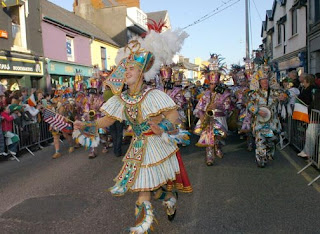 Here are the Woodland String Band from Philadelphia, bringing a touch of American glitz and professionalism to the streets of Macroom town.

It was a grand day.

Two days later, it was Sock Madness 3 - or Sock Madness Forever as it's now called - and there wasn't time to think, let alone post.

The pattern came down at about midday West Cork time and by evening I was able to post a progress pic. 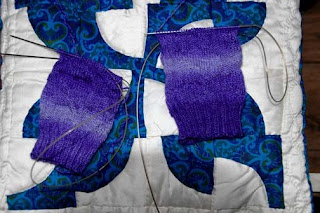 I put them on this Drunkard's Path pillow because the lovely pattern by Ronni (Raspberry on Ravelry) was based on that quilting design. The yarn is one of my own self-striping experiments - didn't turn out quite as intended (do they ever?) but liked it a lot all the same.

On course to finish within my two day record.

Only... the next morning dawned bright and beautiful and DH wouldn't hear of the day being spent indoors knitting. Off to West Cork with us, to gather even more material and pictures for The Book. OK, I could live with that. What did an extra day matter? The socks could come too. 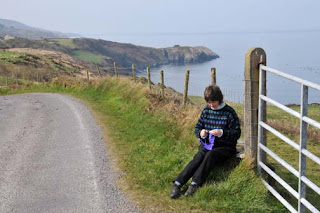 Here they're being worked on Sheep's Head, on an absolutely deserted small boreen winding high above Bantry Bay. Nobody in sight or hearing, even though 'twas a Saturday (well Sophy Wackles was there, but she's being kept out of the picture for the moment). 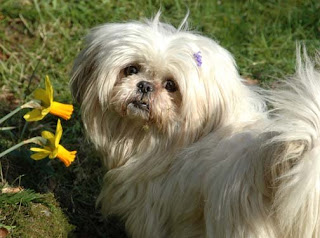 Oh all right, here she is with some spring narcissi. Can you see the thread of sock yarn in her topknot? 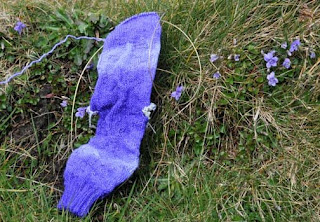 And here is one of the socks, among some early wild violets (know what to call the colourway now, don't I?)

We had a good day, wandering on the lesser-frequented byways and looking for hidden beautiful places. 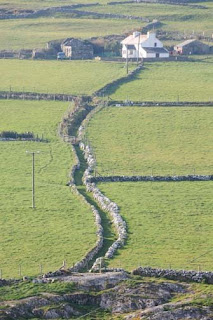 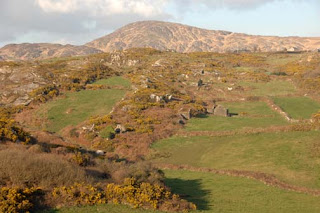 - and this ruined village beyond Lissagriffin. You'll have to look closely to see the little stone houses blending into the landscape, with the gorse and the bracken and the ivy gradually taking them over, but the more you look, the more of them you'll see. Echoes of the past is the phrase that always comes into my mind when I see a place like this. Those tiny fields, the little houses that once held whole families, the lanes where children ran and men drove cattle - all now silent under the sun and the wind from the sea.

Oh the socks did get done, in only a little over the two days, so there is time to relax and rest the hands before the next round. 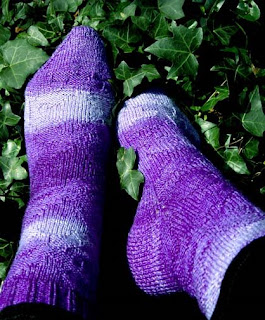 They really are divinely comfortable (now that the stitch marker left inside by accident has been located and gently removed) and I'm very happy with them. But of course it's impossible actually to stop knitting the darn things now. Found a pair of Jeanie Townsend's Cathedral Socks that I'd been working on (before Christmas for heaven's sake), and worked out where I was in the pattern (not always an easy task). They'll keep me going until Round 2. The hand resting can wait.
Posted by Jo at Celtic Memory Yarns at 10:46 am

Thank you, for sharing the incredibly beautiful world that you live in with us Joe.

My local fiber guild has ridden a "float" (a large flat truck bed like yours) in the 4th of July parade here the last two years... spining, knitting, rug hooking and weaving(!) our way down Main street. We get a lot of attention and questions. And last year we got first prize!
But oh! We don't have that good pure drop music accompanying us! I'd have given plenty to have been there in front of that pub!
Uhm... and what's with the Philadelphia band in your parade... and dressed like ancient Egyptians!?!

oh I can so see a delightful horror story written around that picture of the ruined village - vampires, or nasty spirits, or virulent disease that is still hiding in the fabric of the buildings

You look quite elegant in your cape and with your spinning! Yay, JO!

The socks are very, very pretty, and so is the yarn, but then you are a wonderful dyer and knitter.

OK, enough of the nice talk; don't want your head to swell.

Beautiful pictures. Thanks for saring your part of the worls with us. Did I miss the info on the book?

Hooray for spreading the fibery faith! Excellent, Jo, you look quite at home there spinning on your adorable little Kromski for all and sundry. Who knew that alpacas were as stubborn as mules?
Also, nice work on the sock madness socks. The color is lovely! They look almost like Trekking.

Once again, more lovely pics of knitting and Ireland. I loved the ruined village, and the lane leading up to the farm.

The best, though, was seeing you knitting within view of the ocean.

I can't wait until the snow completely melts here and we are as green as you all are!

Good start to Sock Madness! I wish you luck.

Sophie is a darling and Vinnie cracked me up.

Every year, I look forward to your St. Patrick's Day report. And you never disappoint. I just love you in your cape with your romantic little Kromski. It is so jolly to be taken back to scenes of a simpler life. I do hope you are able to inspire and educate a new generation of Irish crafters.

And hooray for finishing your first pair of SMIII socks. I'm so far behind there is no hope. Just life!

Thanks again for sharing your Ireland with us. I always enjoy your travels.
Love the violet socks! They are so pretty.

enjoying the photos and stories . . . thanks for posting and love the signs of spring not yet here in Indiana, USA . . . Lea-Ann

both parades look like a lot of fun. I'm not sure what to thing of that American band though. Exactly how did that fit in with St. Patrick's day?

I can't get over that picture of the sunken lane leading to the farmhouse. It just begs you to come walk down it.

And the abandoned village makes me want to adopt it and bring it back to life.

And you knitting in the wild with the sea in the background just makes me envious!

My very favorite book when I was in about 4th grade was "Cottage at Bantry Bay". I had forgotten all about it until your photo. That book is one of the main reasons I want to see Ireland for myself. Thanks for the memory.

Great socks and as always, fabulous photos! Stiffens my resolve to visit Ireland in the future...and not just to meet your lovely self!

I wanted to tell you how much this Irish American enjoys your blog. I dream of visiting Ireland some day, and, when I do, I'll make a list from your pictures of places I must see (and yarn I must buy).

Sounds like you had a lovely Saint Patrick's Day! I always love to see your pictures, there are definitely no ruined villages in America...we'd bulldoze it to put in a mini mall :( Instead I can live vicariously through you.

You lilt to Irish in today's blog. My paternal great-grandparents were Irish and I try to imagine that they used the same vocabulary. However, please, what are gorse and bracken?

I like the subtle self-striping in your wild violet MMF socks.

That's quite the lane at Three Castle Head. And oh, the colors in the ruined village pictures portray it so fittingly. (Yes, there are ruined villages in America. And some real treasures of them, for a fact. One needs to get off the beaten track to find them. I will never forget the feel of standing in various old Anasazi ruins, listening to the great deep silence.)

What a wonderful parade you had! And an inspiring contribution you and your friends made--were you able to produce any fiber riding on the trailer?
Your photos of Ireland make me long to visit. Although your socks are quite beautiful, and the perfect color, somehow the spectacular scenery of Ireland captures my imagination--and I'm not even of Irish heritage.

What fun those parades look. The socks are a gorgeous colour and the countryside of Cork is really beautiful. I really must go to Ireland again.

What beautiful country!! The parade and events looked very fun!!

Lovely to be back to visit my Ravelry friends and see the crafty projects and travels done. It has been a long time now as spare time is rare now when I`m a student again. I enjoy myself as a student, but miss frequent knitting and blogging. I`m now home for six weeks study practice and Easter holiday.