Just snowed under with work - and, it must be admitted, the occasional knitting project. The trouble with Ravelry (as has been said before and doubtless will again) is that unless controlled with an iron hand and unshakeable willpower, it expands to absorb every free moment (of which there are few enough at the moment).

In this case, Charity invited me to join a KAL for vests on Ravelry - Vest-uary. The idea was that you cheered up the month of February by knitting a jolly vest which was (and still is, indeed, not just in February, wouldn't you agree?) an excellent notion. 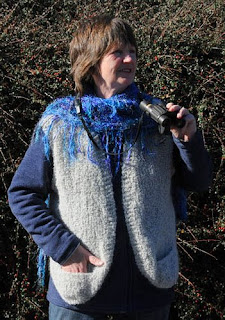 I made this Ersatz Adam's Vest, so called because at the time all I had to go on was a line drawing in an old issue of Knitter's. Used a warm merino boucle-d with a fine nylon binder, doubled, and it is so light and snug I may just wear it for the rest of the year. You never can tell in the Irish climate. Integrating the pockets into the points was fun. 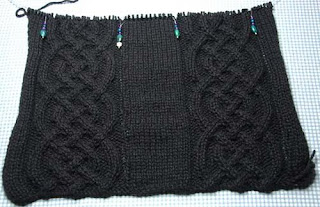 The Shenevski Vest (after the beautiful design by my Bulgarian friend Ana whom you can find on Ravelry if you're there, as you should be) isn't done yet. I joined in a new ball at the armhole shaping only to perceive after much decreasing and simultaneous cabling, that something wasn't quite right. By daylight it was obvious that the yarn had changed quality and texture - the bag of Royal Cashmere had contained two rogue invaders of cashmere/silk. Very alike by artificial light, more obvious in the morning. Fortunately there's enough of the originally intended yarn to complete the project. After the laborious tinking back and picking up.

Sock Madness 3 is almost upon us too, which has necessitated much discussion on Ravelry. and then, as if preparing for that were not enough, DragonYady started a KAL for an exquisite mitred scarf of Ruth's design - the pattern's free over on her blog, go look. I mean, could you pass up something like that?

Apart from the day job and the knitting and dyeing and so on (thank heaven the gardening season hasn't started yet), DH and I are working flat out on the new book which has to be at least in rough draft form by the end of this month. As far as I'm concerned, it's his pictures that will make it, not my words, so I'm trying to match text to images.
Where do you choose, though? He has so many of this rather special place called West Cork. 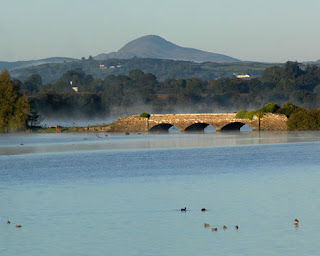 This is one of my favourites - the Gearagh close to our home, the old arched bridge echoing the past when a train ran through the as-yet unflooded valley. We walk along that old road often. 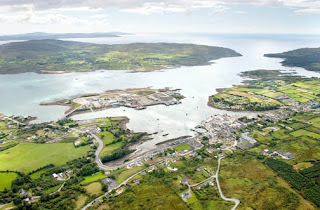 I love this aerial shot of Castletownbere and Bere Island too. 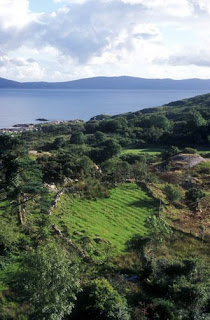 - and Bantry Bay.
Deciding what to leave out will be as hard as writing text that will be a match for the ones chosen.
Don't think I can sneak Muffy The Yarnslayer into the book which is a shame. You may not know it but she was recently given an 'Ugh' award on a Ravelry group for that famous picture with the Eriskay cashmere, an honour she accepted with her customary glower. 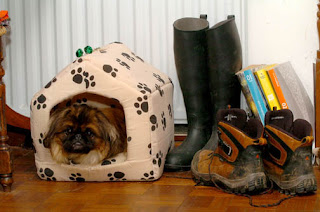 You don't know how many tangled balls of cashmere I've got stored away in here for emergencies...
Must go write. March marches ever on.
Posted by Jo at Celtic Memory Yarns at 2:52 pm

Best of luck on the book! Love the photos.

Your prose is fabulous, don't worry about it. Also, those picture? Jaw-dropping amazing!

Please let us know when the book is in print and available to buy-- and where we U.S. readers might buy it. I wouldn't miss it for anything.
Thanks,
Gretchen

That vest is fabulous - especially the pockets! Can you share the pattern?

With the Madness of Sock Summit 09 in the Ravelry air, are you planning a trip to the Pac NW in August?

Please put me on your list of buyers for your book!

I should think Richard will be clever enough to sneak The YarnSlayer into a corner of a landscape picture: Sheep peacefully grazing on an old green hill as Muffy trots brisky off the page, scarlet yarn trailing from her jaws.

I can understand why you have a hard time deciding which pictures to use. They are all lovely and green. A perfect view of Ireland at it's best :)

Jo, the book sounds exciting! I'm glad the Adam's Rib vest worked out - it was great fun having you along for Vest-uary! :o)

Whew, you're alive! Quietest you've ever been. Tell Richard I LOVE his photos. Can't wait for the book.

God love The Yarnslayer. If that's not the cutest little face ever, guarding her horde.

Got my name in the hat for SMIII! Let the games begin.

I need a guided tour of Ireland with Richard's pics and your prose at my side.

As usual your blog is a fountain of eye candy (er, sorry, mixed metaphor!). Such gorgeous photos - please please let us all know when we can buy the book.
Glad you could write something even while busy. It's always a treat!

Great post. Lovely to have you back. Pictures are beautiful. Worth the wait!

Oh, I love the bridge photo. Just wanted to tiptoe down to the water's edge and slip a kayak in, then disappear into the mist (I have a thing for kayaks and mist).

My daughter and I both LOVED the photo of Muffy and the yarn. I think, if we ever visit Ireland, that she will want to leave a yarn offering to Muffy. Placed gently at her paws at the door to her little puppy house. With due reverance.

You do realize that Muffy could become the patron saint of all traveling knitters, don't you? (So make sure to tack up a sign requesting good yarns only!)

The photos are fabulous - good luck with the book. And, please let us know when it is published.

That vest - Ersatz Adam's Vest - is exactly my kind of vest. Any chance you might write up a pattern and sell it on your eBay site? I would love to have it. I'm not far along enough in my knitting experience to make up a pattern as I go.

The photos are so beautiful--your husband is very gifted. And I already know your prose will rise to the occasion also. Please let us know how to go about getting a copy of the book when it comes out!

I am sure you'll let us know when the book is published. We loved West Cork when we visited some years ago...

Your photos and vest are beautiful! Good luck on your book. A while back you encouraged me NOT to fix two mistakes in a lace shawl. I agreed with your analysis--and I embraced the totality of the work with love. And, it's beautiful! It's done and no one will ever see the mistakes but me, and I'm all right with that. The rest of the shawl is stunning. Thank you so much!

I'm a bit behind in reading your posts (well, not just yours, love - everyone's blog posts lately) with this job hunting gig going on...

I admire all the beautiful photos as always, but I *must* ask, what is that gorgeous blue scarf? shawl? muffler? around your neck?!

Ah!!! Bere Island,it holds a special place in my heart and so lovely to see a photo of it, Thank you.
Great vest and it looks cosy indeed
Good luck with the SM , you truly are a glutton ;)but it is fun too isn't it ????

Eye candy all of it - photos and words.

I see, you're into tiny little dogs!