The Emerald Isle Just Got Greener

Celtic Memory, as you are all well aware, is a paragon of perfect self control. She will not be led whither she does not wish to go. She is proof against blandishment, temptation, the siren whispers of those who would guide her down the primrose path. Get thee behind me, stash enhancers!


Until it comes to Fleece Artist, that is. To be precise, Fleece Artist's Cashlana, that seductive blend of merino and cashmere which would cause a saint to look sideways, mere mortals to faint.


As did Celtic Memory. The French phrase is 'coup de foudre', I think, signifying a sudden, heartstopping moment, after which nothing is ever the same again. Often applied to love at first sight. Which this was.


Of course it wasn't my fault. It never is. In this case I lay the entire blame on Amy Singer of knitty.com. She it was who put up the Spring issue full of delicious new patterns, among which was the breaktaking, yes indeed the heartstopping Laminaria. 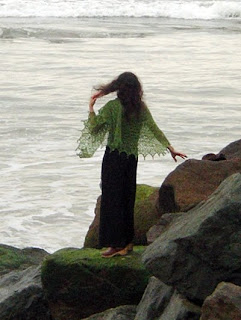 If ever there was a shawl crafted by mermaids or water spirites, this is it. I have never seen anything so magical in my life. (Oddly enough, when I moused over the original illustration, I could swear that the word 'Kelpie' appeared suddenly but disappeared again just as suddenly. See? Magic. Definitely. Of course the skilful photography didn't hurt either.) 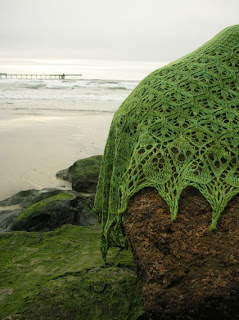 The original is worked in Fleece Artist Suri Blue, in the Moss colourway. Just for interest's sake, as you do, I pottered over to the website of my favourite supplier, Knitty-noddy, and looked up the yarn. Very nice indeed. Lovely yarn. But can I live without it? Yes I can! I was on my way back, congratulating myself smugly on my self-restraint, when THIS caught my eye. 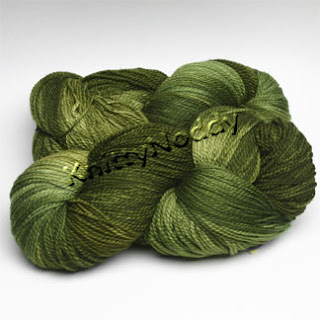 Oh dear heaven! Cashlana (90% merino, 10% cashmere) laceweight in the Moss colourway. Can one survive not just one but two coups de foudre in the same morning? Is this fair? Amy Singer, Fleece Artist, and Evelyn at Knitty-noddy, are you three in cahoots? Evidently. Oughtn't to be allowed A girl can't even surf the Net any more without being besieged. Could you have resisted?


Evelyn at Knitty-noddy is a delight to deal with, friendly, helpful and totally understanding of the wild desire coursing through the veins of anyone who chances to catch a glimpse of Cashlana en passant. It took hardly any time. 'Twixt Paddy's Day and Easter, the package winged its way from Oregon, and arrived serenely in West Cork this morning, where its glorious contents were reverently unpacked and placed on suitably soft Irish moss and dry beech leaves for their picture to be taken. The primroses courteously welcomed them too. 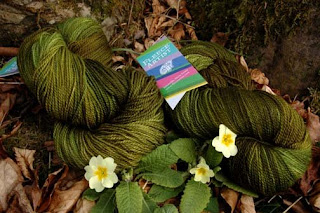 This yarn is so beautiful I don't feel worthy of it. But I am going to cast on for that Laminaria shawl just as soon as Sock Madness allows - in between the rounds if necessary (a good reason for finishing each round in double-quick time, don't you think?) It looks to be an entertaining pattern, with some new Estonian lace stitches which will be fun to try.
The green theme continues. Inspired not only by the shawl and the Cashlana, but also by the evidence of spring bursting out all over West Cork, Celtic Memory decided to dye up some more merino/tencel sock yarn in an attempt to capture the spirit of new growth. 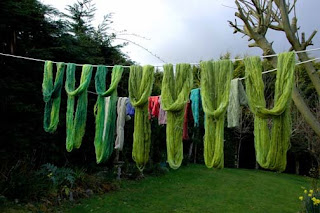 Here they are on the line, with a row of newly-hand-washed socks behind them. Tropical Rainforest to the left, Irish Moss to the right.
Those with sharp eyes may note some unidentified skeins beyond the socks on the back row. 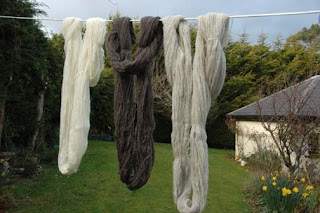 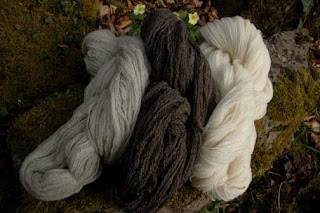 Went hunting in the fabric stash and eventually hauled out what I had been searching for - a good length of genuine antique linen, probably 19th century, and probably organic too for all I know, since they weren't using too many pesticides then. A session on the sewing machine, and - 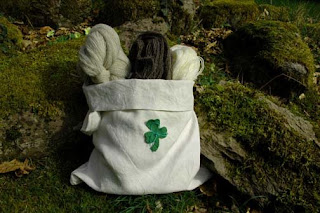 Hey presto! Antique, double thickness linen knitting bag, complete with drawstring and adorned with green shamrock (removable for laundering), with three lovely thick skeins of certified Irish organic fingering weight tucked inside. 400m of each shade, plenty for that Icelandic lace shawl or indeed any other. The kind of gift you want to keep yourself.
I've just listed these on eBay (Item Id: 170204791162. ) There is another purpose behind their sale: my dear friend and yours, Angeluna, has a son undergoing treatment for leukaemia at the moment. Medical costs are horrific and soaring with every day. Any profit will go to his hospital fund. It is bad enough having a loved one so ill without having to worry about money as well. OK, so it will be a drop in the ocean, but at least it's something one can do to show support. I hope she won't mind my mentioning it here, but she has written about her son's illness on her own blog, so I trust she won't think I've overstepped the boundary.

A lovely surprise and harbinger of spring this morning. Noticed a tiny wren flying back and forward outside the front window rather more often than usual. Went outside to investigate. 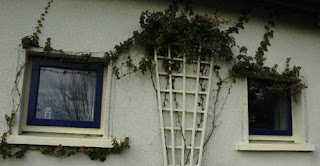 Planted this creeper in a pot between the two small windows a few years ago, hoping it would spread and decorate the front wall. It did, and I like it very much.

So did someone else, it seems. Take a closer look. 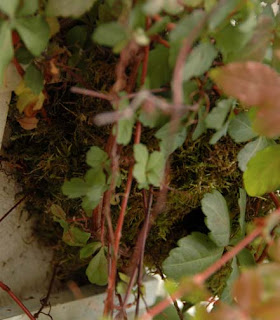 Can you see what has been tucked in there so neatly and tidily? A little wren's nest, skilfully woven of moss. It isn't lined with soft wool and feathers yet though; the cock bird builds the nest and then invites his lady love around to see if she approves. If she does, she chooses the carpets and curtains as is her right. I do hope she likes it. It's in a very good position for taking pictures of the babies in the fullness of time. And I couldn't be more thrilled that the King of Birds has honoured our home in this way.
Posted by Jo at Celtic Memory Yarns at 7:18 pm

Beautiful! There might need to be some organic Angeluna lace in my future.

I love dealing with Evelyn - I get my Sea Silk and cashmere/silk blends from her...very nice items you got this time around!

Ohhhhh, green and soft yarn goodness all rolled into one! What a find Jo. And yes, the points on that shawl are a huge selling point. Love it. (need to finish another shawl first though.)

I am going to be casting on Luminaria, too! toooooo gorgeous.
On another subject - Can you/will you put your ebay store name up on your blog's margins so I can find your yarns there? I know it is Celticmemory or Celtic Memories or something like that, but ebay is not very helpful about finding you when all I have is a best guess about your name. Thanx.

Ah, green has been my color lately as well. It really heals the soul, doesn't it? Marvelous stuff. And congratulations on having a wren nest with you, I hope he finds a lovely lady to share his home with!

I fell hard for Luminaria too. Luckily I haven't found the yarn yet. But I'm worried I might sooner rather than later. I don't think I have the fortitude to wait to cast on until I'd actually have time to knit on it steadily.

I had the same "coup de foudre" when I discovered this lace shawl on your blog! too early to rush to my favourite knitting shop but I plan to go soon. Thanks for sharing this with us.

I feel absolutely the same about Laminaria. LOVE it! Want. To. Knit. It. Haven’t found the right yarn yet, still trying to get something locally. But am nearly at the point where I am falling and browsing the online-shops… Thank you for your hint!
Looking forward for little bird pics!

I got the giggles when I noticed the phrase "paragon of perfect self control" was right next to the photo of you holding an armload of mill ends... Your green yarns hanging on the line are beautiful. -- Kirsten

The moss Cashlana is perfect for that mermaidy shawl. You did the right thing in ordering it. And quick delivery, too-- it was meant to be. Speaking of quick delivery, the Connemara sock yarn zipped from Cork to California in eight days. Well done, Irish and US postal services!
/s/ Gretchen

I'm a green lady myself, and I have got a "coup de foudre" for Laminaria too, but also for jaden :
http://knitty.com/ISSUEspring08/images/jadenBACK2.jpg
Hopefully (strange to say that), I have a huge lack of monney actually, so I'll have to dive in the stash!

I would succumb to that beautiful yarn also. And that shawl!
We need a shawl madness group!

I think you were not hallucinating -- my friend Liz, who designed the shawl, was originally going to name it "Kelpie," but Knitty persuaded her to change the name. So there's the inside scoop!

I came over from the KAL on Ravelry! I just love this shawl so much too!

Your Cashlana looks like the same Moss as my Sea Wool...but then I had gotten some BFL first that is an entirely different moss color, more of a pea soup color...well, I can't decide which to use!

The greens are soothing to my eyes and soul these days. Your drying yarns look fabulous.

I love all of the green yarns! Green is my favorite colour. I had to download the shawl pattern as soon as i saw it in your post.

Vicki in So. Cal.

That is a very beautiful shawl! I am a knitter who designed a shawl that I also call the Mermaid Shawl. I am writing the instructions for it now and was doing a bit of research on other mermaid shawls and found your blog. That is just gorgeous.