Easter Treading On The Heels of St. Patrick

It doesn't usually happen like this. Paddy's Day is mid-March and Easter normally falls in April which gives us time to recover from the one before facing the other. But this year they are on consecutive weekends. That means several things, but principally shops and businesses have only just reopened before it's time to shut again. Everything is up in the air, you can't get hold of the people you want, and you keep buying more and more food while the supermarkets are open just in case you run out. A bit like Christmas/New Year which, I have always felt (or lately anyway) should be blended into one event, not two.

Anyway, we had the Macroom Parade last Monday, March 17, and the entire town was en fete. 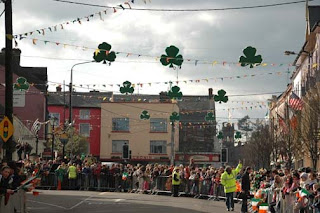 We're not talking New York here, or New Orleans (loved your reminiscences from there, Angeluna!), nor even Dublin or Cork, where everything is professionally and slickly organised. Macroom is a small if energetic market town and the parade is a very personal affair for every man woman and child both in the town itself and in the surrounding townlands. Everybody who isn't taking part is crowding the pavements, calling out greetings to those on the floats or marching, and there is a great friendly atmosphere. Muddy boots are in evidence, and smiling faces under battered tweed caps. 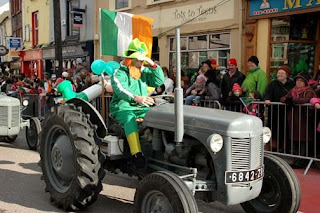 Farmers who were proud of their tractors (and why wouldn't they be?) gave them a bit of a polish to get the worst of the mud off, and drove slowly and solemnly along the main street. This leprechaun was lending a hand to oblige an old friend who was busy with the lambing and couldn't take part. As long as the police didn't check his Tir na n'Og driving licence, he was fine. 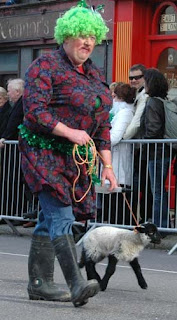 To reflect our ancient and proud woollen heritage, a remarkably composed lamb trotted busily along (a bottle-fed fellow if ever I saw one) - 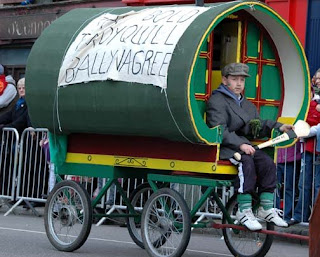 - this young lad with the hurley, seated on the barrel top wagon, is commemorating a great Cork hurler, the bould Thady Quill - 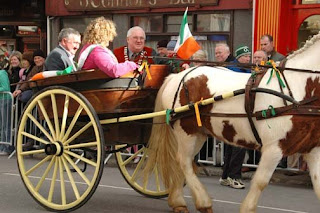 - while the Mayor of Macroom donned his fine chain and was drawn through the streets in style in a private pony and trap. 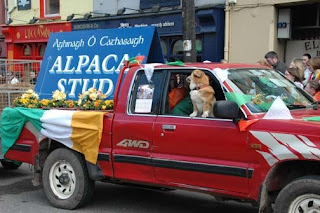 You can imagine my reaction when I saw this turnout coming slowly up the street, the Welsh Corgi in the passenger seat keeping a sharp eye on the trailer behind. 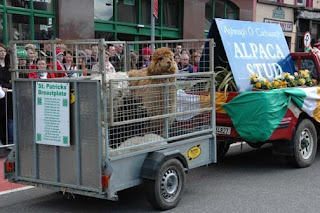 There are the occupants, looking a little offended at having to mix with the common herd, so to speak, Paddy's Day or no Paddy's Day. (Yes, I have taken note of where exactly this alpaca stud is, and I will be following it up - did you think I wouldn't?)
It was a happy, friendly day, despite the freezing wind blowing directly down from the North Pole and rendering the sunshine more of a token than a temperature. When the last tractor had chugged off down the hill to home, everybody repaired to the local pubs to drown the shamrock. Not as sophisticated an event as some of the huge international ones, but nonetheless delightful.
Celtic Memory has found herself strangely at a loss since completing the Zombie Socks for Round 1 of this year's Sock Madness. There are WIPs enough and plenty to keep the needles flying for months, sure enough, but somehow they fail to satisfy. The build-up of tension and pressure for completing said Zombies, though, took some time to dissipate, and gave enough of a head of steam to complete the Sasha Kagan crop cardi at least. 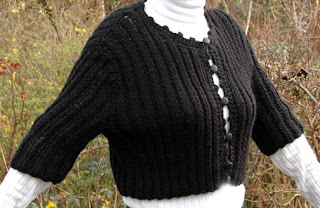 Really rather pleased with this one. It's from the UK magazine Knitting (Feb. 2008 issue) and I made it in some particularly soft and squishy baby alpaca from Peru. Inca is the name on the ballband, and I got it from Yarn Paradise in Turkey by mail order. Used about six balls - say 600m of yarn in all. It hugs nicely - put a line of crochet slipstitch around the bottom to ensure it stayed that way. It will look great over a crisply formal white blouse, but the weather has really been too chilly here to pose thus attired, even for you.
After that, though, the energy for big projects waned. Worked half-heartedly on the Kureyon jacket, but it's a bit bulky to be carrying around in your purse, and a bit too showy for working on in post office queues. The crochet jacket really needs a big table for spreading out at this stage, and plenty of time and good light.
There was no denying it - socks were being actively missed. They were being pined for. Is there any project so delightfully portable and easy and useful to carry around? Something you know you will use the second the last thread has been fastened off? Mooching around the Net, came across Ruth Greenwald's utterly glorious Leafy Green Socks and discovered that she had just posted up the pattern for sale on Ravelry.
Isn't the Net marvellous? And isn't Ravelry? Within five minutes I had that pattern on my desk and was casting on for my own pair of Leafy Greens. 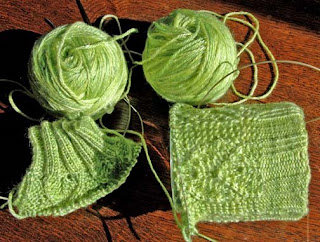 It's a lovely pattern, quite easy to memorise, and with useful stitch sequences which allow you to check where you're at without too much difficulty. I'm using one of my own merino/tencel hand-dyed colourways, called, appropriately enough, First Leaves of Spring. Might just have them done for Easter.
Posted by Jo at Celtic Memory Yarns at 3:48 pm

Lovely work, and thanks for all the wonderful photos of the parade. Here in the desert Southwest, I haven't the foggiest idea where the closest parade is. (There might even be one here, though I wouldn't know. Everyone is too busy dying their beer green to think about it.)
Those socks are definitely gorgeous. I'm going to add them to my queue.

Now it all comes clear. It's Mad-itis, or Zombie Flu, or Sock Fallout Syndrome...not some inherent personality flaw that has sent me burying all other WIPS so I can delude myself into thinking more socks are certainly called for and justified. WHEW! At least I'm not alone.

But seriously Jo, that tencel blend is shiny and sparkly and gorgeously springy. Off to stalk the pattern...

Those are my favorite kinds of parades. It looks like a lovely parade.

That sounds like a great sock pattern. I will have to look for it on Ravelry.

Oh, how I'd love to visit Ireland! I've Irish in my ancestry but not sure how far back. Centuries, I'm sure! The parade looks as though it was lovely, in spite of the wind and chill.

That yarn for the leafy socks is exquisite! My absolute favorite colour is slime green so my eyes gravitated to the yarn right away! Please, will you show us the finished socks once you're done?

Next week we should be starting Round 2 of SM2...Yeah, firsttimer here made it into round 2!

The cart and sturdy pony had me lingering long in wishful yearning.

Thanks Jo, I just lost precious blog-reading time gazing at all the yarns over at Yarn Paradise.

Macroom is delightful. I LOVE leprechauns who drive tractors and green-haired men in drag who walk bottle fed lambs on leashes (I used to bottle feed orphan lamba, a messy and demanding job) and celebrating hurling champions and pony carts carrying the mayor.

And I doubly love the Corgi keeping an eye on his little Alpaca herd, which they must have brought just for you. Now Jo, how have you not discovered them until now? And what are they doing with that luxuriant fleece? And can you just help them out by taking some off their hands?

Your Crop Cardi is wonderful. Is it worth buying that issue of Knitting? They have it here in the bookstore, but plastic wrapped so that you've no idea what's inside. Very nice on you.

Haven't seen the progress on the Kureyon jacket in quite a while. Absolutely cannot believe you cast on more socks to knit between SM2 rounds. Mad as a Hatter!!!

It's a very nice cardi, and thes socks are great! I love the green color!
Here, we're having a parade on Easter day!

Your photos and story makes me want to pack up and invite myself for a visit!

Socks are always justified, trust me - I'm a knitter!

I LOVE that green sock color. It's the exact color I'm trying to achieve with bedspread and pillows in my bedroom. Hope you survive second round sockinsanity.

Thanks for sharing the St. Pat's parade with us. I tried to log on to the website at the appropriate time, but couldn't get anything to load. This was the first St. Patrick's Day since 2000 that we haven't spent traipsing around with hard shoes and soft shoes and bouncing hair. I felt very quiet and empty!

I love those green leafy socks!!! And that color is absolutely gorgeous. Did you dye it?! (I may have missed that bit...)