That was a lovely day yesterday. Cool and grey the weather was, quite a restful change, and we headed for Balboa Park in San Diego to meet a blog friend, Vicki. Gosh, Balboa is breathtaking - its amazing museums, that gigantic outdoor organ (which was sending waves and washes of music across the whole park), the walkways, the trees and flowers - what a resource to have on your doorstep. Parking was another matter, on a busy Sunday, but we managed it eventually by loitering with intent in one lot until someone moved out. Then we made straight for the International Houses - these lovely little individual buildings ranged in a circle, each one showcasing the culture of a different country. You could tell which one was Ireland because it had a huge tricolor outside.
And there was Vicki! 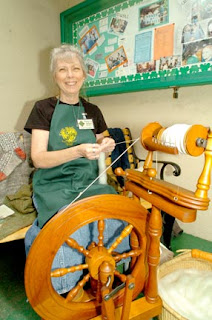 For so long I'd been getting these friendly interesting comments on my postings, and now Vicki In So Cal was there in person! She was spinning yarn and talking to visitors and doing a great job for the House of Ireland. Several passers-by wanted to buy some of her work - especially a beautiful handknitted sweater in natural wool shades of browns and creams - but she wouldn't. 'If I charged what it took in time, they couldn't afford it,' she said wisely, 'and there is too much of myself in every single thing I make.' 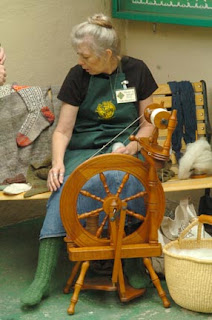 She showed off her lace patterned socks too, for Richard's questing camera lens, despite being rather shy of photographers, and even found time to ask after Muffy the Yarnslayer. Muffy, you're famous in So Cal, how cool is that for a small belligerent Pekingese? (No, Muffy's not too good on the Internet, but Tasha will bring up the page for her and spell the hard words so she'll be able to read this.
Vicki got into this spinning at Ireland House by taking Irish language classes there! She wanted to be able to speak Gaelic (she has both Irish and Scottish blood) so just upped and learned. Go Vicki! She has the lilt perfectly. And then she decided she wanted to give something back, hence the display spinning at these special days.

She gave me the most wonderful souvenir of our meeting - a whole skein of alpaca, spun by herself from fibre sent to her by a friend in Arizona (we should all have such friends in Arizona). 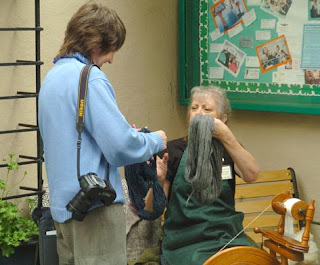 Vicki, dear Vicki, I will make something very special with that yarn, something I can wear and think of you. And there will be a surprise lucky bag on its way from Ireland rather soon. I'm so so very glad we met and hugged and talked.
Richard was thirsting for the open spaces and the mudflats and the estuaries so we headed south of San D to Bonita where he wanted to check out the birdlife. And I checked out Bonita Knitting Store! 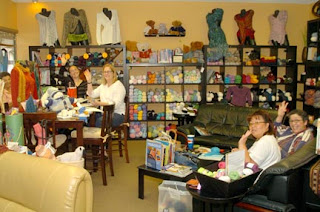 where they were having a Sunday afternoon session, sitting around eating cookies and chatting over their knitting. That lady on the far right is Tania Marshall, sock guru and teacher extraordinaire, while I think that's Lakia Meaden waving on the far left (sorry if it isn't you, Lakia, but I love those Aran socks you're making). Owner Susan Schlesinger wasn't there that afternoon (she has to take some time off for her family), but you never know I might get back down there before we leave.
I had a really nice relaxing time with these girls, talking about everything and anything. Tania sorted out my toe-up-sock worries quickly and competently (wouldn't I love to take one of her classes) and I was overjoyed to find she hated Figure of 8 cast on too. I'm not alone, yay!
We talked and laughed and I bought some Elsebeth Lavold Silky Wool and some more Crystal Palace bamboo cotton, and some more needles (if I don't use them, I know a Little Yarn Shop in the West that will), and when Lakia had to close up at 5, we sat outside and talked and knitted some more, until Richard came back. 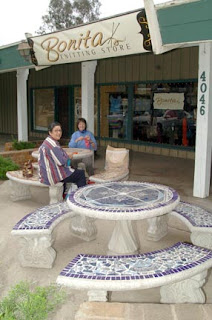 Here's Tania heading off to her car. Next time she teaches on a knitting cruise, I'm going to BE there! She's so calm and helpful that I'm sure I would never feel like tearing my work apart or hurling it into a corner for Muffy to work on... or would I? Maybe she just has a better temperament than me (Tania, not Muffy. Muffy has serious problems with her knitting.) 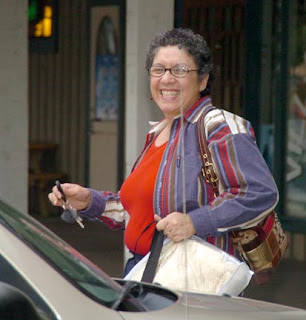 Oh and while I remember, they put your purchases in lovely big see-through bags at Bonita Knitting, so you can go on using these for ever. Nice people.
Today is our second last day - we fly out at 6 tomorrow evening - so some serious mopping up of LYSs and bookstores needs to be done. Last chance to stock up for the next round of Sock Madness - I'm teamed with Jean of Golden Purl, and we're already getting excited about it. 'Twill be a different story next Thursday night/Friday morning when the panic sets in!
Posted by Jo at Celtic Memory Yarns at 3:18 pm

It was so lovely to meet you in person after getting to know you from your wonderful words here. I hope to come to Ireland someday, if I can force myself on a plane, and hopefully meet up with you again. Thank you so much for the kind words about my halting, beginner Gaelic. Have a safe trip home.

Really appreciate your managing to check in with us from the road. The trip continues to sound wonderful. Thank goodness Richard has his estuaries to keep him busy. Vicki lovely, and aren't you lucky to have found a Sock Diva in Bonita. Can't wait to have a full report of stash acquired.

Your posts are such a joy! I'm really enjoying the warmth and wonder of your tales on the road. Enjoy the rest of your time in the US and have a very safe trip home!

Hey, what are you getting at with the "we should all have such friends in Arizona" bit? Are you suggesting I should obtain an alpaca and send you some, via Vicki's spinning wheel? (Cuz I would consider it if I didn't think my little pit bull would die of fright at the mere sight of said alpaca.) ;-)
Glad you're having a good trip - I hope you found some sport-weight! (Or at least, something that knits up to 7spi!)

Jo! You made my day yesterday. Such fun meeting new people through our knitting addiction. And to have met you while lounging in my 'living room' - The Bonita Knitting Store - perfect. Keep in touch once you get back home and let me know how that toe up technique works for you.

I love traveling with you and Richard. Great Wildlife pictures and super yarn stores and tales...what could be better other than maybe meeting in person and knitting together :D

I like your site! Check out my knitting on my site.

Jo, what fun! I was born in the Navy's hospital in Balboa Park, many long years ago. Sadly, the last time I visited was nearly 20 years ago, how time can seem to fly.
To a safe journey home and your dreams filled with your adventures all the way back across the pond. Looking forward to seeing all your enhancement!

What a great trip you have had , just my type of holiday; plenty of yarn stores and meeting like minded folks . Thanks Jo for you great posts I have enjoyed them.

Terrbily homesick for my California. Miss the wonderful weather. Thanks for the trip and travels. Have a safe flight home.