I promised to tell you about this stunning book published by Cork University Press and this post, therefore, will be all about that. There are other things to talk of, naturally - not least Sock Madness which is almost upon us, but also a trip to the Little Mission in the Far West, aka Spin a Yarn in Kenmare, and the latest spinechilling segment of the Celtic Vest saga. But I'll post again later on this evening with regard to those.
Weaving Tapestry in Rural Ireland: Taipeis Gael, Donegal, is written by Meghan Nuttall Sayres, with photographs by Laurence Boland. It's a good big coffee-table book with lots of illustrations, both colour and (to my mind even more effective) black and white.
Its main purpose is to chart the setting up of a tapestry weaving industry in Donegal in an area hard hit by the decline of the tweed industry, and it does that very effectively, showing old images of weaving there in better times, 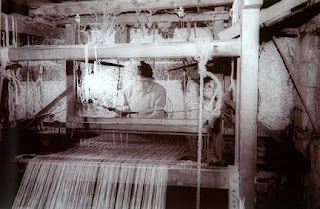 as well as more recently. 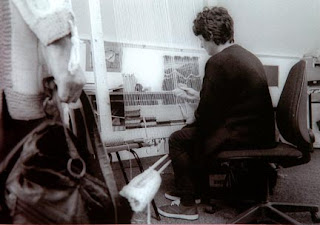 There are pictures of quite stunning tapestries which depict legends like the Children of Lir: 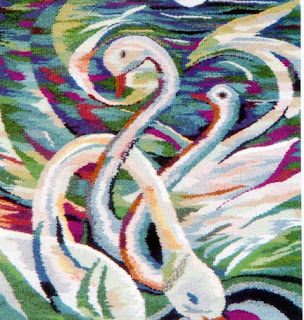 and landscapes or buildings. I really liked one where they showed the original inspiration, a Martello tower built at the time of the Napoleonic wars: 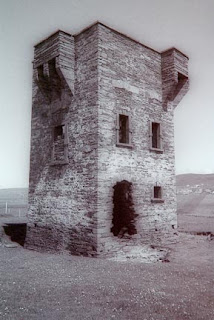 and its rendering in tapestry: 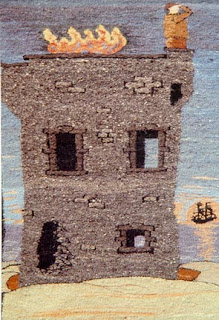 I love the way the weaver has enriched the original by putting in a blazing beacon, a watcher, and even a ship at sea - friend or enemy?

The real richness in this book for me, though, lies in the interviews, not only with today's weavers who talk of the ways they work and of the things which inspire their creations, but with so many of the older people of Donegal, those who had at their fingertips the old knowledge and skills which so many of the younger generation lack. The late James Shiels, a master spinning-wheelwright - 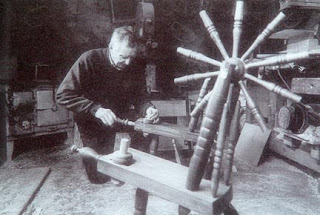 or a lady who, though she tends knitting machines, is never to be found without needles in her hands - 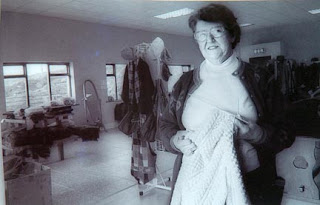 There are whole chapters on the raw material - wool, the getting of it, the preparation of it, the sheep themselves - and, best of all, a detailed and well researched section on the natural dyes which have been used in Ireland since records began and probably long before that. Bogbean, madder, weld, lichens, kelp, even iron ore and bog earth are all listed and referenced. There are fascinating glimpses into ancient documents and the Brehon Laws which protected dye plants and had punishments for the wilful damage of these. The story of St. Ciaran is quoted - the one where he is told to keep away from the house while his mother is dyeing the yarn, as men must not be around at dyeing time, and in revenge curses the wool so that it dyes unevenly. Some saint! I wouldn't have canonised him - but I suspect this is one of those cases where the Church with its growing power was trying to outlaw or demonise the ancient power of women's work.

I'd love this book for the dyeing references alone, but as a record of old crafts in Ireland it is beautiful too. There is even a picture of the ancient whorls from drop spindles in the National Museum: 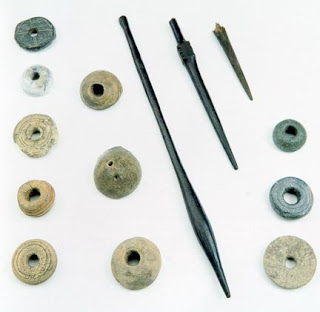 I'll give its full reference here, in case any of you have a birthday coming up.

Posted by Jo at Celtic Memory Yarns at 7:45 pm

I must get myself that book. Absolutely.Must. Happily, I do in fact have a birthday coming up. :o)

How well you represent your little green island to the world. They should make you Ambassador at Large, in addition to your missionary work. Did you notice the knitting needles protruding from the weaver's bag in the second photo? And the natural dying sounds utterly fascinating.

Now, Celtic Vest, spine tingling? Are you going to tell us you are working the ends into it? Not that your frogged it? Fingers crossed here. And I feel rather guilty flogging you about it since I talked you into the SockMadness.

It took me five times of typing in that verification, correct each time, before Blogger would let me in. Anyone else having this problem?

It sounds like a fascinating book. Thank you for the review and the pictures.

No birthday coming up, but that book just went on my Christmas list. I love the quality of University press books in general, and the photo selection is just stunning.

Hmmmmm ... that "saintly" story sounds like it was carefully designed to display the power of the new Catholic Church over the ancient ways of women. The saint finds himself in a situation where the old ways are an obstacle to him, so he pulls a little power play, resulting in a tale designed to intimidate the impressionable.

And, even aside from the Ancient Rites, there are very good, sound mundane reasons not to have the men about while doing such things; they'd fiddle with it, and try to tell you how to do it better, even if they've never seen a dyepot before in their lives.

Yes, thanks for that review. I think the book goes on the list with the newly released "Sheep and Man" and Richard Rutt's "History of Knitting".

My library is deficient :(

Good luck with the socks.

Jo, What a beautiful book on the history of weaving. I have to agree with Dez's comment (Hi Dez):

". . . that "saintly" story sounds like it was carefully designed to display the power of the new Catholic Church over the ancient ways of women. The saint finds himself in a situation where the old ways are an obstacle to him, so he pulls a little power play, resulting in a tale designed to intimidate the impressionable.

And, even aside from the Ancient Rites, there are very good, sound mundane reasons not to have the men about while doing such things; they'd fiddle with it, and try to tell you how to do it better, even if they've never seen a dyepot before in their lives."

As one who was raised Catholic (note the past tense)the power play going to a patriarchal society from matriarchal is quite visible in the histories of fiber (in all of history actually).