The Mission Bells Are Merrily Ringing!

Well, what it is to go forth and do good works and find that others are coming right behind you offering their strength and commitment too! Hail to this week's Gold Star Missionary of St. Knitola, Sister Denise who has, out of the fullness and generosity of her heart, offered several copies of the Bible (the Interweave edition, the only possible one in the mission fields) and is even now packing them up to send off to this western outpost. Now is that self-sacrifice or what? Just wait till they hear about this down in Kenmare!


I didn't yet of course know about Sister Denise's sacrifice when I trundled down to Kenmare on Saturday. It was a freezing cold but bright morning, and I stopped at the top of the hill overlooking the Lakes of Killarney to show you what they are like on a February day before the green has returned. 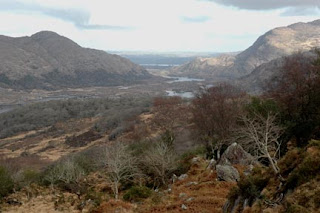 Most visitors don't see them like this, so you're kind of privileged (I know, you'd prefer to see the rich luxuriant green and the sparkling blue water and to tell the truth so would I, but this is Ireland in February when, as I have often observed, only its mother could love it). On to Kenmare and to Spin a Yarn (aka the Western Mission) where I found Joan curled up on the Noro-throw-clad sofa busily knitting a tiny jacket for a baby friend. I unpacked my carrier bag of goodies, and carefully laid down on the table:

4. Our own Steph's Meditations For Women Who Knit Too Much.

While she was still wondering what I was up to, I firmly said that I was going down to Jam for a coffee and would be back in half an hour. Whereupon I left. (Oh, yes, I did indicate fairly strongly that these were a sight-only loan, not a gift.)


Jam was as lovely as ever and I gave Deb's love to it while tucking into a slice of Victoria sponge (well, I didn't take all the cream, just a scrap. Honestly, in that place, despite the fact that the cake is packed full of jam and cream, they still go ahead and plonk an industrial-sized helping of cream on the side as well, haven't they ever heard of cholesterol? I ask you! But it's the same everywhere in Ireland, you could be dying and they'd still offer you cream with it.) Then I strolled slowly back. 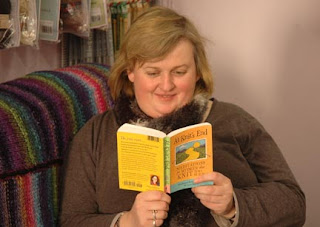 She didn't even hear me opening the door.

When I did manage to get her attention, her eyes were still glazed. She'd loved the Vogue, was enthralled by Interweave, amazed at the Lavold, but the Yarn Harlot, ah the Yarn Harlot had just conquered her 'leventy-millionth slave.

It was kind of nice to see someone who a half hour earlier had never even heard of Steph now so obsessed that she could barely give me a quarter of her attention. 'Where did you get this? Where can I get it?' We've all been through it, but we started further along the road, so to speak. She came to it completely unknowing, which makes it even better.


And yes, she did take details for subscribing to IK and Vogue. Lavold she looked at again with a dazed expression. When you've only known Aran patterns, Lavold can take you like that. At first. Then you get steely eyed and go out hunting for her books everywhere.

Readers, and fellow missionaries, there is now one little mission down there in Kenmare where they are at last aware of a far bigger, wider world, of joyous possibilities and happiness beyond belief. They are on the Road at last, the Road to Enlightenment, Fulfilment, and The Great Stash Nirvana, not to mention the Pattern Paradise.


And then when I got home I found Denise's incredible offer of past issues of IK to pass on. This on top of her incredibly detailed and easy-to-understand instructions for harnessing and controlling Blogger to do my will and not its own. Denise you're a girl in a million. Love ya.


I took a tiny break from the Celtic Vest and retackled the Travelling Cables Cardi, just so I could at least post on the KAL and let them know I hadn't fallen by the wayside. 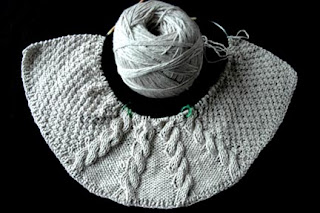 This was it before I started expanding and sending the cables travelling in earnest. 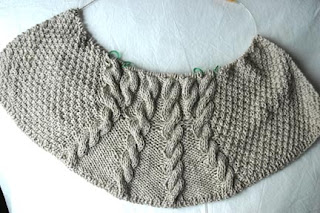 and this was it a few hours later.

Look at it. It might not be very apparent in this picture but the latest cables are definitely looser, wider than the earlier ones. Yep, I'd put in another two rows between crossings. Why the heck do I always consider myself above counting and checking? I'm so confident in my cabling that I gallop along, trusting to my eye and believing absolutely in my own infallibility.


I did try to persuade myself that it didn't matter, wouldn't show. But it did, and it would. Roars of rage, followed by a nice bout of tantrum frogging. The fingers twitched to hurl the whole thing out the window, but I managed to restrain them. I'll go back to it in a few days.


Serve you right, says Angeluna, for stepping aside from the path of righteousness as personified by the Celtic Vest. All right, I learned my lesson. Started on the left front immediately. Was a bit worried about the short rows with their wrap and turn, but of course as so often happens, once I really got down to it (yes, yes, and read the instructions carefully) there was nothing to it. 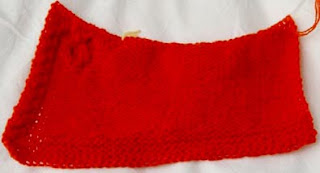 Going along fine. Promise not to start anything else (much) until it's done.


Well dyeing doesn't count, does it? I've been hankering after that lovely Tierra design on the Berocco site for ages, and finally got down to dyeing some of my private stash of silk/cashmere to the requisite shade of violet. I used roughly double the amount of yarn weight to the recommended amount of dye, because I didn't want it too deep. 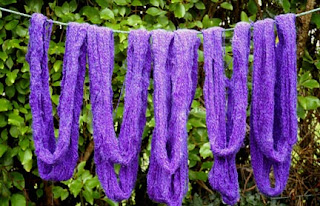 Hasn't it turned out beautifully? I can't wait for it to dry so I can wind it up and get started!

You're doing splendid missionary work there, what a hoot, to see someone's face when they lose their Harlot cherry. I mean seriously, it is at least if not more so that big of a deal, eh?
The violet yarn is lovely.

I love to see your missionary work turn out so sucessfully!

Your purple yarn is so beautiful! How on earth will you resist? :0)

that picture cracks me up.

Your mission work was done splendidly. The convert "bit". What a wonderful photo of sheer joy! Love the new Blogger signature photo of you! Oh WOW, Celtic Vest is soooo close now. You are just a few days away from wearing this treasure. If worn while knitting TCC, she (CVest) will bring fortune and fast needles. I am really sorry about the fat cables that you have to rip out. I've been frogging all week-end. In my frantic "I quit smoking" condition, I am knitting like a fiend, without the patience to count stitches or follow patterns. One thing too small, one too silly, one doing a weird unacceptable border thing. Oh well, no blog...no photos.

Jo. You crack me up. I read one post, decide I don't have time to get a proper comment there and when I come back your blog has changed again (looks great!), you have links, photos and a lengthy posting on your missionary adventures. What fun!

By the way, the Killarney lakes area looks a bit like California. Although we are finally starting to turn a bit green since we have gotten some rain recently.

I absolutely love the color you died your new yarn. That is going to be gorgeous.

Did you ever get a reply from the Sock Madness people? I am still waiting....

Sock Madness News...Haven't received another e-mail, but I did check their site and they said they had closed the list. They want to divide us up into teams and will get back to us around the week-end with yarn requirements, etc. Think knitting should start around March 10, but be sure to check the blog.

Your photo could have been taken here & the colours are the same but I love the view in all the seasonl shades; that is if you can see through the rain !!
Love the lilac shade

Well my gratitude for introducing me to that book will never die ! The throw is lovely I must say .Any country who loves butter and cream has to be a holiday destination for me , not this year as I have my eye on Harrogate maybe next.

Wow, that purple is amazing!

The blog is looking very professional these days, Sister Jo!
The purple is great and even if you never ball it up, it makes for an interesting garden accessory!
Keep up the missionary work - She is smiling down on you!
Just learned you cannot even put in the sign for a grin in a comment!

I picked up a great tip for digital-red-management today from one of the commenters on my own blog: photograph against a charcoal grey background.

And as for your missionary work ... congrats on another convert!

Dez, tried the photographing of red against a light grey wall, and it didn't help. Perhaps a darker grey would work better. And the red thing happens even with my SLR. I've always wondered why.

Sock Madness update...materials needed are now listed on their website.

Jo, are you finished with the vest? I just know you are knitting hard on it. I've started about 3 more projects in the meanwhile. Yikes!

Hmm, I'm tossing up whether to buy the viking patterns of Ms Elsebeth. I have it from my guild library and it is indeed stunning. I also bought the Vogue knitting magazine this week, and my IK issue arrived today (here in the southern part of Australia).

I so sympathize with the quandary of sticking with projects, but I so understand the pull of the colours and the fibres.

So, did you ever tell the Kenmare yarn lady that not only was she going to be posted on the world-wide-web, but that you were not actually going to have to steal her soul to do it?

It is sooooo great to know that Kerry& Cork are getting dragged kicking & screaming into knitting heaven. Can't wait to go there with you. Right after Jam. Must go fortified, ya know.

Loved the pics of the Killarney woods. That is such a magical place. I always imagine fairies there and once I saw a herd of deer including a huge stag that strutted right in front of our car at daybreak, right out from the mist, so regal & proud.

And yes, isn't it amazing how you get a pile of whipped cream next to the whipped cream cake thingie? However, I do like Americanized whipped cream better with the vanilla & sugar in it.... Sweeter.

Hey, are you coming over to go the Maryland sheep & wool festival? If you flew into NYC or Boston, I could pick you up on our way thru. We stay at a friends house & there's 3 extra rooms. You could even come back to Maine with us to spend a few days & I could drive you back to Boston. We could do a yarn/farm tour as well. Hmmmmm, I can see you clicking over to the MS&W festival info now.... I'm serious, so think about it! You wouldn't have to pay for lodging or transportation while you're here...

Deb Woolley at The Woolley Farm