The Strange Case of the Disappearing Altar Stone

Truth is stranger than fiction.  In De New Book (and don't forget, lovely people who've been ordering it from O'Brien Press and requesting personally signed copies, let me know too, so I can match up the personal inscription with the order form, which isn't always easy because I might know you as Meg or Sunshine and the official order will have quite a different name, you can let me know by my email link on this page) ANYWAY where was I?  Oh yes, in De New Book the beautiful ancient site of Gougane Barra gets a good look in, both for its history and for its traditions which continue to this day.

Now in Gougane, on the tiny island in the lake -

There is a green island in lone Gougane Barra
Where Allua of songs rushes forth as an arrow
In green-valley'd Desmond a thousand wild fountains
Come down to that lake from their home in the mountains...

there is not only the tiny 19thc church which is enormously popular for weddings (and who could blame any couple for wanting to plight their troth in a place like this?) but the ruins of a much earlier chapel which lie, moss-grown and peaceful, to the back of the island.  Within these ruins, laid on a rock, is the venerable slab known for centuries as The Altar Stone. 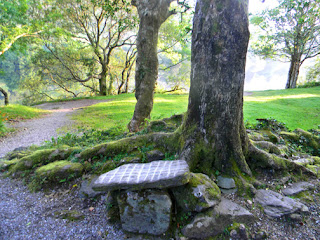 For generations, those doing 'the rounds' at Gougane at St John's Eve and in late September pause at this stone and make crosses in its surface with a sharp pebble.  Over the years the grooves have been worn deeper and deeper as the faithful perpetuate a tradition that is likely to have started a long long time before Christianity ever reached this land.  Since time immemorial it has been customary to make sunwise circles around a sacred site and mark stones at specific points to ensure good harvests, good fortunes, fertility, cures.  And the Altar Stone is part of that tradition.

Or it was until a little while ago.  Breda Lucey, whose family run the wonderful old-world hotel at Gougane, went over one evening and discovered to her shocked surprise that the stone was gone. Nowhere to be seen.  It had vanished utterly.

Outside, in the greater world, theft and criminal acts are, sadly, accepted as part of daily life. But Gougane is a place apart, a sheltered haven where those seeking help and guidance have been comforted and supported by the very strength and spirit of the place.  Who could commit such an act?

The reverberations of Gougane's loss echoed well beyond the valley.  The police, the clergy, the newspapers, TV and radio all joined in the questioning and the searching.

The assistance of a diving club from Cork was requested.  When they heard what was missing and from where, they declined any payment for probing the depths of the lake - known in ancient times as Irce, after a goddess who protected its waters and its sacred island.  'Sure wasn't I married on that island myself,' said their group leader. 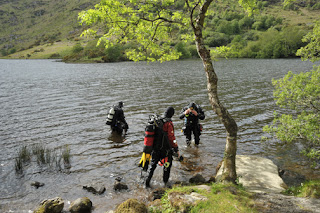 They searched the water for hours, hoping that perhaps some thoughtless teenagers had hefted its not inconsiderable weight as far as the shore just for a joke and slid it into the depths.  But nothing was found.  Members of the Lucey family donned waders and trudged right around the edges of the island in the shallower water, hoping to find the stone lying there.  But it was not.

One would feel tempted to say that no luck will come to those who have taken the Gougane Barra stone.  It's hard to think otherwise.  If someone desired it for a garden ornament, an amusing souvenir, or, worse still, stole it as a commercial undertaking on request, then one would not be in their shoes in the future.  The Altar Stone is part of Gougane, and should remain where it belongs.  Everyone hopes that it might quite suddenly be discovered one day soon, perhaps by the side of the little road that leads into the valley, returned quietly in the middle of the night.  If so, the matter would rest there.

In the meantime, the faithful will continue to observe the tradition of St John's Eve when they make the rounds, If the stone is not there, they will touch the tree under which it lay.  The custom will continue, as the Midsummer bonfires blaze on the hills around.

Those same Midsummer bonfires are another fascinating echo of the past (yes, they're given full coverage in De New Book).  Today's little rapscallions rushing around with branches and anything else they can lay their hands on to feed the bonfire (in city streets I've seen old furniture being pulled out of houses and thrown on the blaze) have no idea that they are continuing to observe a tradition whose origins go back far into the mists of prehistory.  In ancient times druids would kindle the sacred bonfire, made of nine special woods, and from that fire all household hearths would be re-ignited, having been put out beforehand.  Cattle were driven through the smoke, and young couples joined hands and jumped over the flames.

Once I had the good fortune to be flying back into Cork on St John's Eve.  Looking out of the plane you could see the grey smoke of a hundred bonfires curling and wreathing up to the clouds, right across the countryside and the city.  (Yes, the fire service does regard this night with apprehension, do you need to ask?)  It was a strange scene, and one which confirmed the strength of the old ways, even when today's fire-makers have no idea why they are doing it, just that it's something they must do.

Had a spell of tidying up not long ago.  Having opened a cupboard in search of a knitting project, and then retiring hastily as dozens of project bags fell out and tumbled all over the floor, I decided enough was enough.  The sight of so many UFOs (UnFinished Objects) was intensely depressing, and the only way to deal with that is to SORT IT OUT. 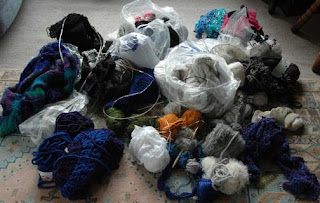 Here is the sorry heap of horror.  Half-finished, hardly-started, rejected, mixed up, totally forgotten about.  Time to show a little discipline chez Celtic Memory.  Several days of determined unpicking, rewinding, even (in a couple of rare cases) rescuing and laying on one side to finish after all, led to this: 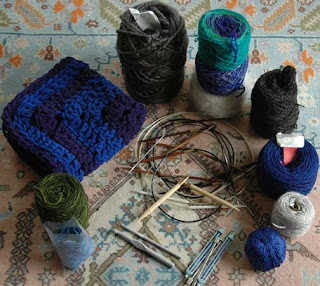 Neatly-wound balls of yarn, ready to be returned to their respective boxes.  One dog mat for the car, which was so close to being finished that it hardly took ten minutes.  And lots and lots of lovely circular knitting needles of every gauge, crochet hooks, and stitch holders.  Oh I did feel virtuous. Currently am trying very hard to restrain the overwhelming urge to cast on for seventy-two shiny new projects before finishing those lying patiently in wait. 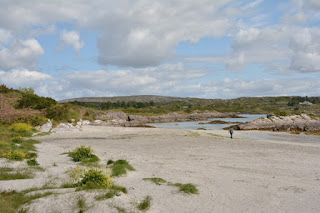 Speaking of dog mats, Petroushka, being still somewhat of a puppy, demanded a good day out recently.  'I'm entitled,' she explained, sitting up earnestly and studying our faces at the breakfast table.  'Every dog has her day, and mine is NOW!'  So we took her to West Cork's lovely coastline, and let her run wild on Toormore beach (she's out there somewhere, a tiny speck in the distance) which was deserted, despite it being a lovely summer weekend.  We still don't get crowds here, thanks be. 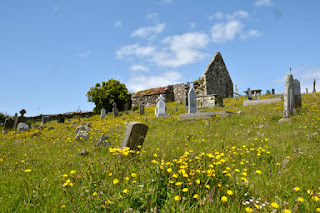 Then we went up to the hill above Lissagriffin and wandered around the old graveyard which holds many victims of the Famine in huge unmarked plots.  It's hard to imagine such sorrow and grief in a place like this, but echoes of the past are everywhere.

Came back through the Pass of Keimaneigh and discovered this lovely green woodland by a stream. 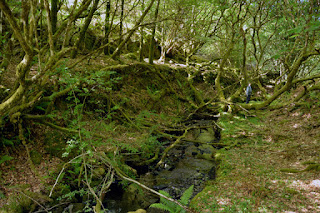 It was ridiculously Tolkien-ish and you kept expecting to see elven folk flitting among the trees and perhaps a green elvenstone lying by the water. 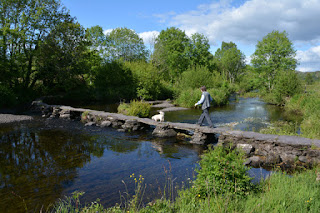 And finally, as evening was drawing in, we walked across the old clapper bridge at Ballingeary.  The hollowed slabs showed how many had walked that way before us over the centuries.  A lovely end to a perfect day.
Posted by Jo at Celtic Memory Yarns at 10:19 am

Jo, So sorry to hear about the missing altar stone. Especially, now. I recently had my DNA done and what I thought was an ethnicity of German and English turned out to be decidedly Irish! My uncle then admitted that yes, we have Irish blood running through our veins. Why the years of denial, no one could say for sure, other than my grandparents, who were born in the mid to late-1800s, felt the need to hide the truth since Irish immigrants were treated so poorly. I am now slowly uncovering my true birthright and finding it all fascinating. I've read your blog for many years and it is like coming home now. Thanks for that!

You live in such a beautiful place with a wonderfully rich history. Too bad about the alter stone. I hope it magically reappears. Well done on the retrieval of old UFO's!

Two lovely posts in as many weeks! It's good to hear from you.

Hoping that the stone returns,
stashdragon

Why, I do not understand. Whomever did it may they develop a conscience and return it.
If not may the spirits and guardians of the past shake at them till they realize the only way
to have things right is to return what was not their's to take.

Goodness, I hope the altar stone returns in the night. That is such a sad thing to read.

Loved the descriptions of St. John's Eve, something I am wholly unfamiliar with. Funny how we do so many things for holidays with no real knowledge of what we are up to.

Ordered De New Book in advance from Amazon (I get cheap shipping). One day in the future, when your fame and notoriety aren't taking up all your time, perhaps I could send a bookplate for your fine signature? I pray the altar stone contains enough guilt to make the culprit return it to its rightful home.

This makes me so sad, that someone (or rather, several someones) would so such a thing. I'ce been checking back since you first posted this, hoping to see a post about it being restored.

Your book is in my "once a year splurge" cart, when I sort of treat myself to a few things with a little bit of mad money. I won't be able to get it signed, but I have been looking forward to it since you first mentioned it (maybe talking about a banshee story in the post?) back when... I can't wait to read it.

And sorry about the typos. Apparently my phone's keypad is taking a hiatus from proper spelling. :p