In Which The Turning of the Year Brings The Winter Solstice

Joy of Midwinter to you!  The days have been short and the nights long, but from now on, the pattern is reversed and we start moving towards spring and summer again.  (Of course it doesn't happen in quite such an organised and numerical manner as that, Nature takes her own good time and knows what she is doing, but it can't be denied that we have reached Midwinter in calendar terms anyway.)  And in West Cork this morning there were even a few trills of birdsong to show that all creatures are already looking forward to brighter warmer weather.

Well... perhaps not all creatures. 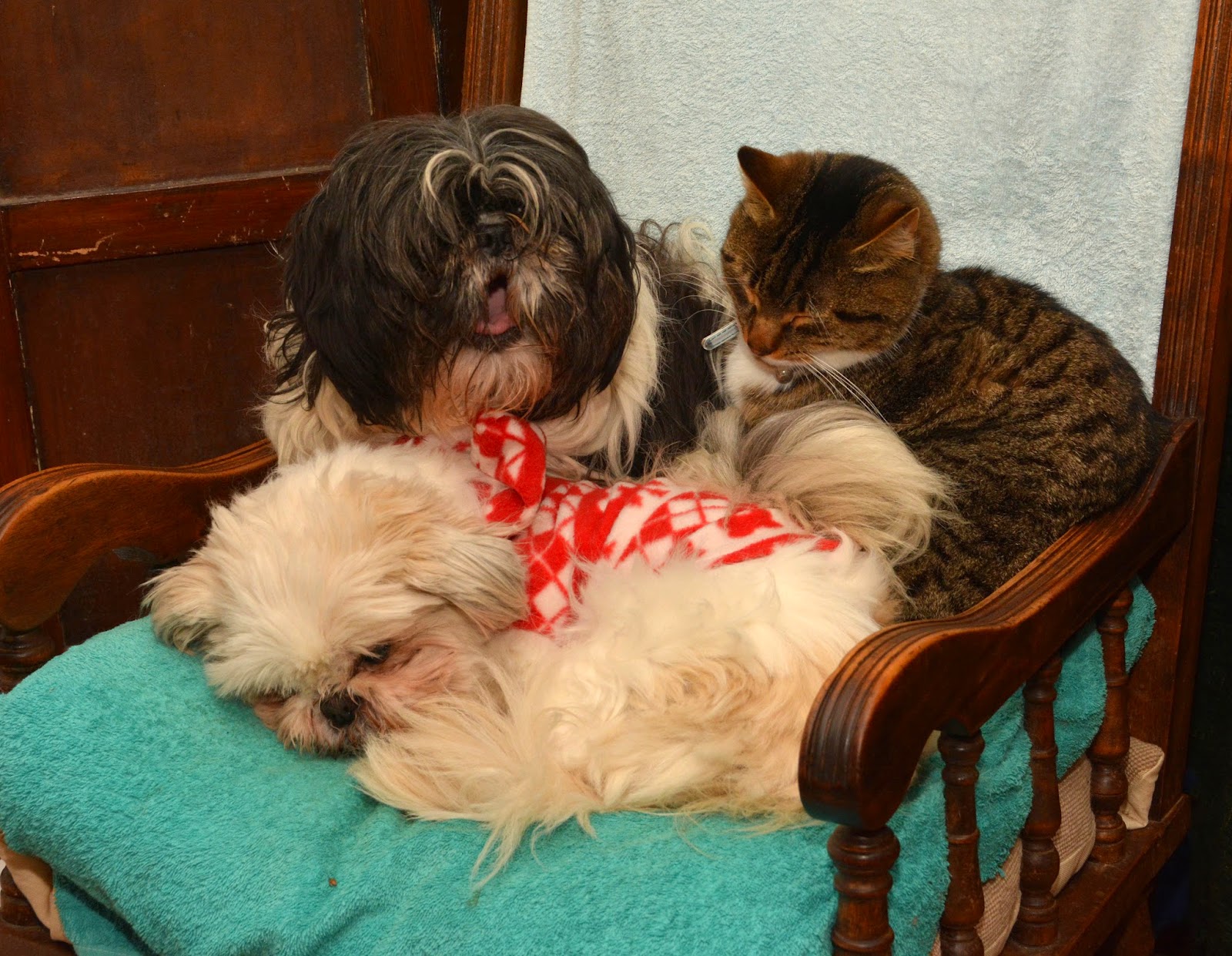 When the weather gets cold and the days darker, canines and felines conveniently set aside their usual antipathy and jostle into a warm and comfortable conglomeration on a rocking chair near the fire.  Sophy Wackles usually gets up first, and then Tamzin leaps lightly over Sophy's supine body and settles next to her.  Finally Paudge Mogeely floats over the arm of the chair with no apparent effort, and tucks himself into the tiny space left.  That's them settled for the evening.  Polliwog?  Oh he's out wandering in the orchard and thinking dark thoughts. Black cats are often like that. 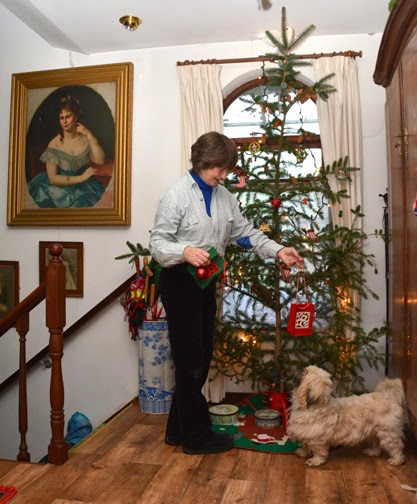 Petroushka, being only just a year old (Dec 8 in case you were wondering) is full of energy of course, and always willing to lend a hand with anything, be it the cooking (let me deal with that beef, willya?  I know just how to mince it!) or the decorating.

She is also ploughing determinedly ahead with her work for the Yarnslayer badge, which she hopes to receive before New Year.  She got an unexpected bonus lately when I inadvisedly left an Advent scarf in progress on a low chair.  Foolish I know, but honestly I was only gone for a moment.  It was enough.  The basket was carried bodily out to the hall where 'Troushka could deal with it properly.

(Yes, the WIP survived, and the scarf, which I turned into a cowl, made it through in the end.  The recipient need never know.) 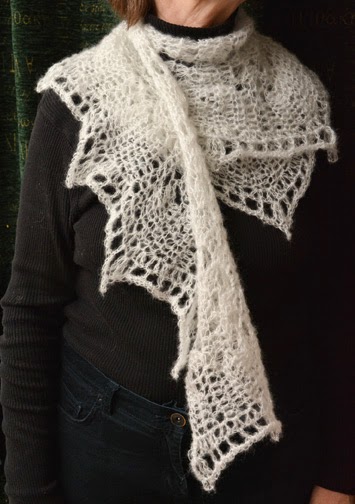 Once that was done, this was an attempt to make a crochet scarf that looked like a cobweb.  It's based on a pattern called Ana Luisa's Wrap, by Julie Blagojevich, but I narrowed it considerably.  Added a thread of sparkle and a few translucent beads to heighten the effect of a dew-drenched web.  Hope that recipient likes it.

Also got a bit of practice in on the knitting machine, and tried out a large cone of bright blue mohair that had been hanging around quite long enough. 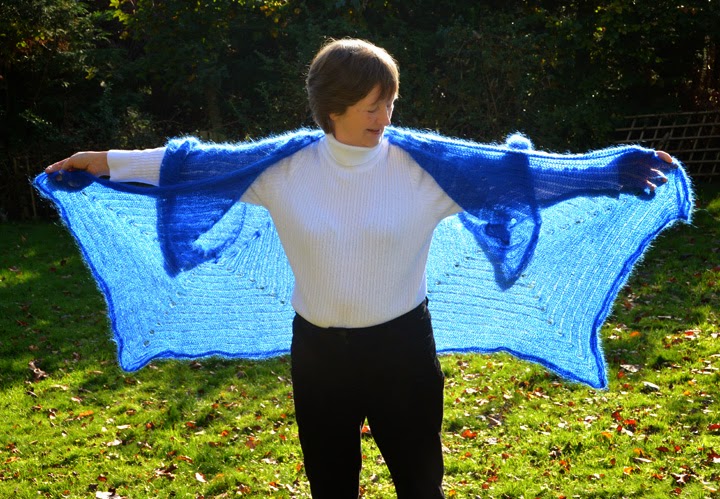 Had just enough for this floaty wrap (Bill King's Gold Star if you want to try it).  DH discovered that it took on a whole new quality when backlit by a rare five minutes of winter sunshine. 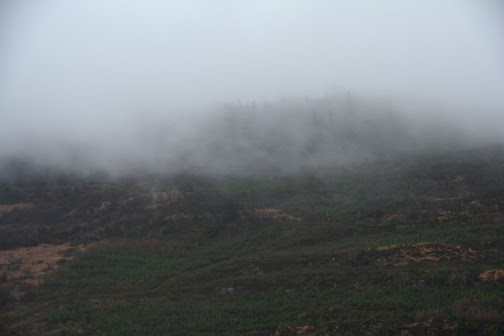 Today was not sunny, though.  The druids were walking the hills, as you can see .  They cause a magical mist to rise when they are moving from one place to another (as naturally they would be at the winter solstice) so that they will not be perceived by common mortals.

Nevertheless, we headed out to capture some pictures so that you could share Midwinter in West Cork with us. 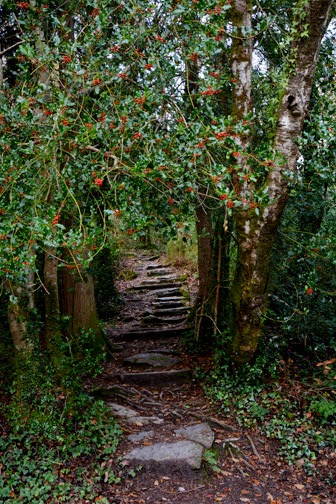 This wonderful arch of holly bent low over old stone steps leading up a forested hill.  It was mid afternoon, so empty as far as we could see.  Late tonight you wouldn't know who would be walking there, working the old magic to ensure that the sun becomes brighter with every passing day.  But it's better not to turn up uninvited for the old rituals. 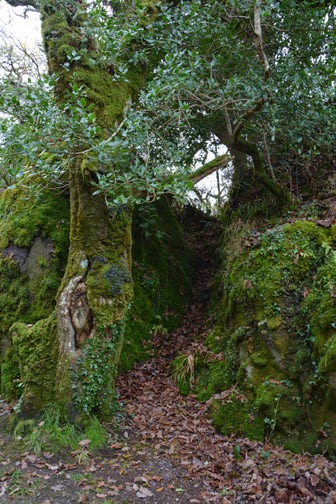 This tiny leafy track too seemed to hint at a secret road to somewhere different.  At the solstice, the veil between this and the Otherworld is very thin indeed.  It is generally accepted that They (the Good People) are closer than you think at these times. 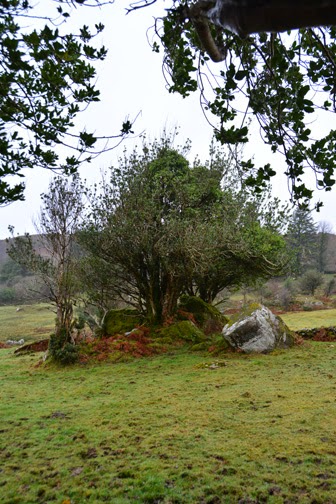 But finally I saw this little mound through a gap in the hedge on a very muddy back road, and knew it was the one with which to leave you this evening.  Get close to it, climb through the hedge in your  mind (just watch those brambles, they can scratch!) sit on the mossy rock underneath that thorn tree, and hold your own Midwinter celebration here tonight.

Posted by Jo at Celtic Memory Yarns at 8:42 pm

Narrow paths sneaking through the trees are the best! Thanks for the warning to watch the brambles.
I wonder if you did a bit of spinning on the rock as you did a few years back.

Whew, I thought for sure Petroushka had managed a fibrey snack.

Happy Solstice and a merry Christmas to you.

Always so glad to see your post at the solstice! The weather here has been overcast for days - the Druids must be walking the hills of northern California.

Merry Christmas to you and yours, and a happy 2015!

Petroushka???? I thought her name was Lucy Claire.
Thanks for sharing the pictures of Midwinter in West Cork. They certainly invite one to take a wee stroll.
Hope you have a lovely, peaceful Christmas filled with all the things that make you smile.