In Which The Cat Bids for a Title, The Stash is Enhanced, and An Antique is Rescued

We were in Norway recently.  Will post about that next time - lots of beautiful fjords, rocky headlands, forests and heathery moors, with a clean cold air that was thoroughly invigorating.

Now its best friend couldn't call Norway inexpensive.  Even indulging in a small beer involves taking out a second mortgage.  So yarn enhancing was to be frowned upon.  All the same, when you're in a country like Norway - is there any other country like Norway for yarn and knitting and crafts generally?  - it's impossible not to take a peek at least, finger one or two of the utterly irresistibles.  A few balls, therefore, found their way into the homeward-bound bags. 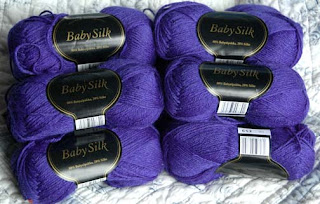 I simply cannot resist this gorgeous violet shade in Drops Baby Silk.  First discovered it last winter in Tromso, and, you may remember, made a pair of long cabled wristwarmers out of it on the spot (on a ski lift too, and while searching for the Northern Lights).  This time I gulped, dropped ten (yes, ten) balls on to the counter, gave the girl my credit card and asked her not to show me the total.  Well, where will I find it again?  Enough there for a superb polo neck winter sweater in ribs and cables, I would think. 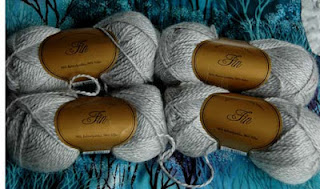 This is another heartstopper:  Drops Fin, 50% baby alpaca, 50% silk, and as soft as you can possibly imagine.  Kitten's coat comes close, but not quite.  Originally took two balls, to make some self-indulgent winter socks, but then imagined what a cowl or scarf would feel like in this, and made it four.  Ah well, we can work 24/7 for the rest of the year. 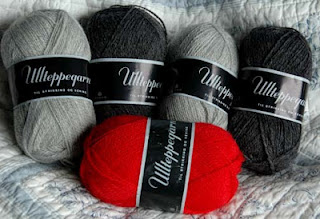 After that, a quick trip to the jolly Spar store on the quayside in Kirkenes, where the Hurtigruten boat docks and everybody stocks up, was a positive relief, with that famous wall of yarn offering very reasonable prices.  (And if they seemed reasonable to me, in Euro-pressured Europe, how cheap must they be to Norwegians?)  Chose five balls of Ullteppegarn in two shades of grey plus a bright scarlet for contrast.  These are intended for the Litchfield Shawl, a particularly classic pattern that will be lovely for winter.

You will remember that the very dear and beloved Muffy the Yarnslayer finally passed on to the Happy Hunting Grounds earlier this year.  For a time, therefore, the stash was quite safe.  But as I was photographing the new acquisitions, small Mishka (growing by the day) decided it was time to make her bid for the title she felt was hers by right. 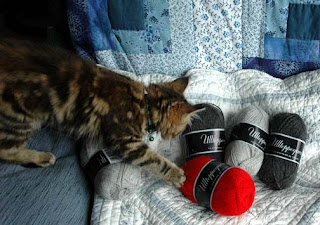 After all, if they will leave these nice bouncy soft balls lying about, what is a girl to do, ignore them?  Not! 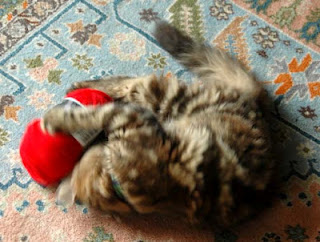 I realise that this is rather a blurred picture, but the speed with which that yarn was skilfully hooked from the chair, dropped to the ground, and attacked with full energy beggars belief.  I did rescue it, since it still has a job to undertake, but gosh, it's tempting to unload a whole fleece on the carpet just to see what she would do, isn't it?

What do you think?  Has Mishka proved herself worthy of the title of Yarnslayer yet?  Or should we try the Fleece Test?

Now - going to the recycling centre is usually regarded as a way of getting rid of all the surplus in the house, the garage, the shed, lying around untidily.  Or it should be.  DH and myself have always been incurable collectors, snappers up of unconsidered trifles, veritable truffle hounds when it comes to other people's discards.  Yesterday I was virtuously unloading plastic here, glass there, when DH casually said, 'There's a battered old Singer sewing machine over there in the skip with all the computer stuff.'  I knew I didn't need another one but I went to look all the same.  You owe that much courtesy to such a lifelong hard worker as a sewing machine, don't you?

Upside down, almost hidden by grey plastic computer bits, it didn't look promising.  But it was clearly old, hand-cranked, with some gold scrollwork still visible.  Hand cranked?  That's coming home with us!  Show me the crafter who can pass by any hand cranked sewing machine. 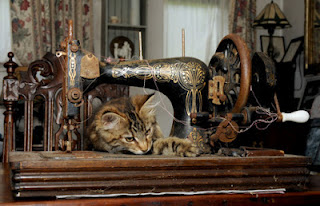 Here it is, with Mishka diligently studying for her Yarnslayer (Advanced) badge, which demonstrates competence not just in knitting yarns but in all other forms of threadwork too.

Cleaned it up excitedly, discovered that nearly all the paintwork was in excellent condition, and - incredibly - all the interior workings were there, right down to a full bobbin in the shuttle!  (Long bobbin and shuttle, not the later round kind).  A lot of bits are still seized up with rust, but currently taking advice on the best way to deal with that.  And it's not a Singer.  It proudly proclaims itself as a Harrodia Prima, provided by - who else? - Harrods of London.  To discerning wealthy customers only, one would imagine. 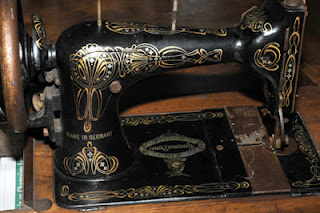 Of course there were many brands of sewing machine back then, often manufactured elsewhere and then badged up by different stores or suppliers.  So you look further.  Like here, on the back.  Can you just see Made in Germany on the main column there?  That puts it very definitely before World War I.  Once hostilities broke out, England imported nothing from Germany (I have a theory that the English 'throwing' method of knitting gained much popularity at this time too - Elizabeth Zimmermann remembered being scolded by her governess in England as a child for trying to use the Continental method, being told, 'That's German!  You do NOT knit like that!')  Did some research, and have narrowed the manufacturer down to Frister & Rossmann, a large industry in pre-war Berlin, thanks to a most useful website run by the delightful Alex.

So can you believe it?  An early 20th century (or, more likely, late 19th century) hand-cranked sewing machine, supplied from 'the top people's store', with all its workings complete, on a skip full of computer scrap in West Cork!  It made me feel warm and happy every time I woke up in the night and remembered it.  Oh I do wonder what its life story is?
Posted by Jo at Celtic Memory Yarns at 2:32 pm

The Norweigan yarns are amazing. i think the title, Yarnslayer, is premature for Miscka (sp?) She, after all, is very young and may grow out of it! The sewing machine is gorgeous--are you going to try to make it work or just enjoy its beauty?

I have my mother's Singer Treadlemaster in storage. She never sewed on an electric in her life and I learned to sew on it (eventually after many used portables, I bought a Bernina).

What a treasure that sewing machine is! Even if it never works, it's so lovely to look at that it's worth keeping just for that. What a find.

I have my mother's hand cranked sewing machine which looks just like yours, including the gold scrollwork! My mom always said that it was a Soviet copy of a Singer. It traveled with her from Ukraine to Austria during WWII and finally to the USA. I wore many a dress made on that machine.

What a fabulous find, that Harrodia Prima - I envy you, and I don't even sew.

There are a few countries like Norway for yarn and knitting and crafting generally: Sweden, Iceland, Denmark. I wish I lived as close as you do; I'd be hopping flights three or four times a year.

And I agree with Jo M above that Mishka has to maintain her dedication into adulthood before she can claim the title of Yarnslayer. (The kicking and biting of the yarn - my cats liked to do that with socks). Love her picture with the Prima!
-- Gretchen

What a find! That machine is beyond lovely!

Mishka the Yarn Terror for now... Slaying may come (but I hope for your sake not).

What an amazing sewing machine to find!

If Mishka is anything like my cats she will always and forever be a yarn slayer. I give my daughter scraps of yarn to play with the cats. She calls it "Playing Yarn," when she drags a string of yarn and they chase it.

I've never had to opportunity to feel the Norwegian yarn. Sounds Heavenly.

Wow for the yarn! Meow to the cat! And wowee to the sewung machine. I had a Frister and Rossman for years. Very well made!

What an interesting post - gorgeous purple. My new kittens have discovered quite how nice knitting is to lie on, and now nice circs are to munch gently, but they have not yet killed balls of yarn. Yet...

Lovely, lovely violet yarn! I seem to be very partial to shades of purple on into cobalt blue. {sigh}

I agree with some of the other commentors... perhaps not a "Yarn Slayer" title to Mishka just yet. (I hear that title and I remember pictures of Muffy looking for all the world like a Chinese Dragon as she came out of a bag with "alpaca fleece clutched in her jaws"! (I typed that and then went looking for the pictures (11/17/2008) and found I'd quoted you exactly!)
I truly hope your Mishka doesn't go so far as to eat the yarn. I have a couple of cats I have to watch for that life-threatening issue. {SIGH}
The hand-crank sewing machine is indeed a find! Kudos to the DH as well! It does look lovely and I hope it can be brought back to a un-rusted sew-able status.

Lovely machine! And very reasonable (in terms of numbers of balls) of yarn for the enhancement.


Bit premature I think for the title, for she might get bored and quit when she gets older.

Lovely yarns. I can't imagine that you still have this antique sewing machine. It's so amazing to look at that and it's worth keeping for. An interesting post indeed!

I had fallen a bit behind in reading your posts (laptop had a headache and refused to connect to the Internet).

Oh my! What a wonderful discovery of the handcrank sewing machine. Of course it must be rescued. One wonders why it was ever toss out in such a undignified manner.

Sad to learn that the Black Brat did not work out but Sophy appears much happier with Mishka. Please try the fleece test! She looks like a champion Yarnslayer in the making. And please more Mishka and Sophy posts.

I'd love to buy your sewing machine. How much you are planning to sell them?
I'd love to take one.

your machine could keep company with the hundreds on display at Spitalfield's in Brighton! i long to own an old hand-crank sewing machine someday.