The Sadness of Sophy, The Serenity of the Sea, and a Storybook Ending.

Let me start by apologising if this post looks a bit untidy.  New Blogger has its own ideas of how it should run, and it isn't very helpful about telling me how to achieve a neat effect.  It can only get better.  Onward!

Things got kind of sad here earlier in the year. You will remember that Maeldun the Wanderer Kitten came to join us, but then left us far too soon. Shortly after that, the dowager duchess Natasha de St Petersburg II also handed in her room key.

Dear old Muffy the Yarnslayer did not long outlive her half sister. She got tireder, weaker, and finally in early May (old May Day now that I come to think of it, which is of course eleven days later than the current May 1) we couldn't pretend any more that she wasn't suffering, and took a very hard decision.

But the row of little headstones in the orchard was getting a bit much. And of course all these losses had a dreadful effect on poor Sophy, who had lost her wandering companion, Maeldun, and then both her comforting aunts in a very short space of time. 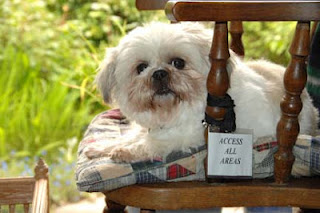 She took to moping on her favourite chair, uninterested in walks, rambles in the garden, anything really.

Now, I hear you exclaim, was the time for that New Black Kitten to play her part, surely? To come forward with messages of comfort, and paw cuddles, to reassure Sophy there was still a friend around?

The heck she did. Black Brat (and that wasn't the word I first typed, believe me) turned into a monster. I think she'd always been one in waiting, but nervousness on first arrival here had hidden her true character. She cuffed Sophy, she hissed, she spat, she even drew blood on a couple of occasions. And of course, the bigger she got, the more trouble she could cause. If I had known when I picked up that kitten that she had been tossed by an Alsatian when very tiny, I wouldn't have taken her. But I only found out afterwards, when enquiring delicately into the possibility of early traumas. That experience, combined with being born a barn cat to a very wild mother, and I knew it wasn't going to work.

Oh I kept on trying, hoping that somehow she would soften, but she just got worse as she became more confident. The heartbreaking bit was seeing Sophy bringing toys and little offerings to the cat's basket, with pleading, imploring eyes, and receiving only a loaded claw paw across the face in response. So eventually I persuaded a friend who had given Black Brat's brother a home, to try taking her too. She was doubtful but the cat had no such reservations. She and her brother welcomed each other with open paws and proceeded to celebrate in a junket of mayhem and chaos that doesn't show any signs of abating several weeks later.

No, of course I didn't like doing it.  What cat lover would?  But Sophy's heartbreak deserved more attention than a little wildcat's shenanigans.  A solution had to be found.

And it was found.  But we had to wait for it.  It wasn't old enough to leave Mum yet.  So Sophy had to be patient.  If you can discern that Access All Areas badge on her chair, by the way, it is there because she always insists on every single door in the house being open.  Doesn't matter if she doesn't need to use it right now, she must have it open and available.  Shut just one door, anywhere, wait five minutes, and you will hear disgruntled staccato yaps that continue unceasing until you give in and remedy the mistake.  Access.  All. Areas.  Did you HEAR me?  Access.  All.  Areas! 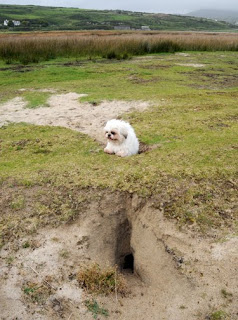 In the meantime, we took her out for plenty of fresh air and stimulating circumstances, in the hope that this would lift the gloom.  'Won't be long now,' we told her comfortingly.  'Things will get better very soon, you'll see.'  And Sophy stumped along, despair in every lineament of that small face.  She stumbled over stones, fell into rabbit holes, ignored the bracing sea air. 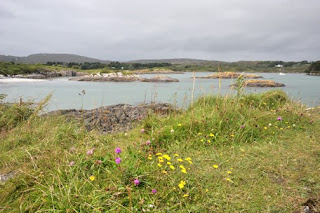 This was down at Toormore, not far from Crookhaven and Barley Cove in West Cork.  It was a fine afternoon during the school holidays, but as is usually the case in West Cork, we had this stretch of coastline to ourselves.  There are tiny orchids growing on that grassy headland, and wild pansies too.

Coming down by Drimoleague, I just happened to glance sideways down a tiny boreen, and saw this wonderful old bridge, which once carried the much-loved West Cork Railway. 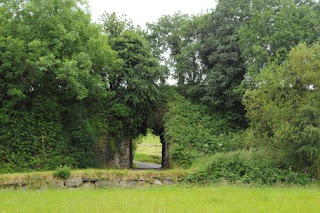 The bridge still stands, built to last, although the train is long gone. I do really believe though that if you wait there late at night, you will hear the whistle of the train and hear the steady chug of the engine as it heads towards the bridge, carrying its passengers and freight safely to their destination. Maybe you could get on, but you wouldn't know what century you were in when you alighted at the next station, which could cause problems.

On the way home, we stopped to photograph a lovely battered old gate with the grass growing long around it.  Don't you just love these gates, in the middle of nowhere, which quite evidently haven't been opened in years? 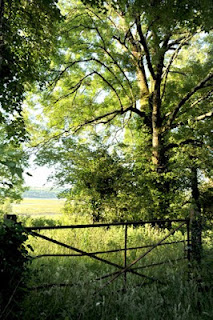 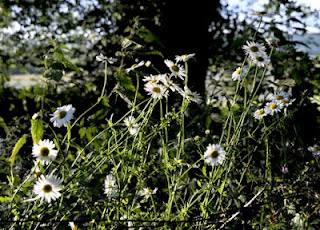 And then there were these marguerites beautifully backlit by the late evening sun. So many lovely things to discover, even at the roadside. 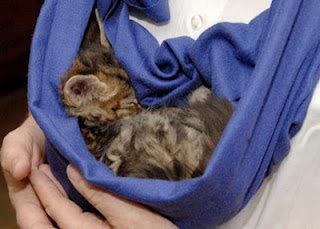 But the happy ending, you shriek! Sophy's Solution!  What happened next? Well,at last, at long last, the solution arrived.

Tiny Mishka (Little Bear) was a bit confused at first, having only just left Mum, and not being at all sure about this strange new world. 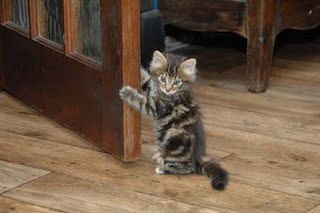 But very soon she began to explore wonderful things like doors 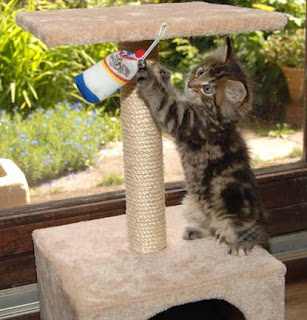 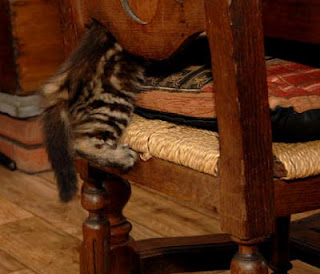 and discovering that one could after all climb these things oddly called 'chairs'.

Did it work? Did it work? Well, of course at first there was a little worry, a tiny hiss or two. But Mishka had been carefully chosen from a household where not only had she been handled and cuddled from birth, but had also been sniffed and licked by two large dogs who liked cats. So the end result wasn't long in coming. 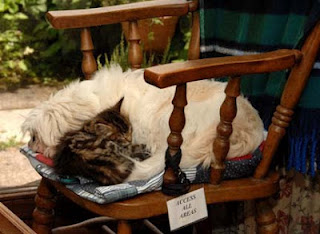 Sophy is lonely no more. Mishka leaps up quite happily and cuddles down to sleep in the comforting circle of her surrogate mother's warm furry body. And they are both looking forward to a day very soon when Nanny will take her charge out on a first exploratory journey around the garden. Happy times ahead.
Posted by Jo at Celtic Memory Yarns at 3:38 pm

So much sadness, but what a lovely happy ending.

You made me cry. What a sweet story. I was wondering about you and your cat recently. Thanks for the post.

I didn't know orchids could grow in Ireland.

Good to hear the happy ending. Sophy just had to wait for the right one. Makes me think of my teenaged sons somehow...

And thus order, equilibrium, and harmony are restored. It is odd how animals balance each other and, by extension, their humans. One too few, or one too many, and everything is totally out of kilter. There are few heartaches that cannot be soothed by just the right cat. Wishing you all a peaceful and pleasant summer.

Your fur babies are lucky to have such wise parents, Now it only remains for Misha to be trained about all things yarn and proper behavior. Best wishes to all!

A lovely ending to a sad story. Now the 2 of them can get into all sorts of serious trouble and have the best time doing it! Watch out for your yarn.

It's so hard to come to the end of those friendships. Congratulations on your sweet new family member.

I should learn not to read knitting blogs on a break at work. I often end up with tears in my eyes. So unprofessional.

This story is lovely and heartwarming. I wanted to pick up Sophy and take her into my lap for a cuddle and reassurance she is not alone. It turns out a bear is just around the corner!

I am sorry the first half of the year has been difficult, but I am delighted to read that there is a happy ending for Sophy and for you. Congratulations on your new little bear.

I'm so glad that it's all worked out, and that you love and respect Sophy enough to make sure things work out for her. What a little sweetie Mishka is - I hope she grows up gently and beautifully.

Happy endings all around - well worth waiting for.

Mishka is the cutest thing on the face of the earth. So happy it worked out!

That last photo is so heartwarming. Bless Sophy Wackles and the little bear. I hope they are BFFs for a long, long time.

You had to make some very difficult decisions.
I would say you chose wisely - and with heart.
I'm VERY glad Sophy's wait is over and that Mishka can offer some light and love to you all.
And, Yes, you made me cry too. ;-)

We have to do hard things sometimes with pets, for pets.

That last picture is a priceless example of why we do.

No words, just hugs and tears shared. I wept for your and Sophy's sorrows, and sobbed (out loud at work) with your and Sophy's joy at the end. May Mishka and Sophy rule the house long and happily, in tandem.

Sorry for all your troubles and hope Sophy feels happier soon.

Our Polish neighbour had a very pretty but timid cat called Mishka when I was child but we thought the name meant Little Mouse (which we children found very funny!).

So very, very happy for poor Sophy. Your watching her bring peace offerings only to get clawed must have tried your patience no end. Thanks for waiting until it was resolved joyfully before writing.

I love happy endings! I am glad that Sophy has a companion again.

I am happy that Sophy has a new friend, as well as Mishka! Adorable pictures!