Of Bright Mornings, Blasket Islands, and (of course) De Book

Honestly, what a lovely lovely lot of people you all are! I never expected such an outpouring of good wishes on the publication of De Book. I knew that we were a strong circle of friends, reaching out to each other from around the globe, but the friendliness and very evident delight you felt in its publication warmed my heart. And yes, brought tears to my eyes. DH, accustomed though he is to the camaraderie and close-knit ties of the blogging world, was taken aback - and as for the publishers, O'Brien Press, they were flabbergasted. I think they're going to have to take the world of blogging a little more seriously from now on.


Listen now, those of you who have ordered directly from O'Brien Press, this is for YOU. I've asked them to hold all your orders until a bundle of books can be delivered down to us for personal inscriptions thereon, which should be within the next few days. BUT - and again, BUT - they don't know which orders those are, so you will have to tell me as quickly as possible. Email, private message on Ravelry, carrier pigeon (as long as it's the Concorde species) or runner and cleft stick (Olympic standard only), as long as you let me know. WITH the name and address given on the order, since sometimes I only know you by your blog name. Oh, and if you want it dedicated to someone other than yourself, tell me that too. And anyone else thinking of having your copy sent from Ireland, and wanting it signed, do it now and let me know. I would simply hate for someone to be expecting a signed copy and not get it. (Jeanne, and Sally, I have you on the list, never fear!)

It's nice to order direct from the publisher. Not only does it support a small independent house in a world that is increasingly run by gigantic conglomerates, it also makes Ireland feel important and loved. I know they won't overcharge on international posting. (In fact I think it's usually far less expensive to send something from here to the Far Beyond than it is in the opposite direction. We go strictly by weight, whilst the rest of you tend to have basic charges, whether it's a fallen leaf or a gold ingot that's being posted.)


Angeluna was the first to post a review on Amazon! Way to go, you can tell that woman's a professional! Mind you, she'd advance ordered from O'Briens before the ink was even dry on the books. Clearly carries a field marshal's baton in her knapsack. She tells me the most ooh'd and ah'd over pictures among her friends were of the pathway through the cornfield to Kilcrea Castle and the old forgotten road through the Gearagh. 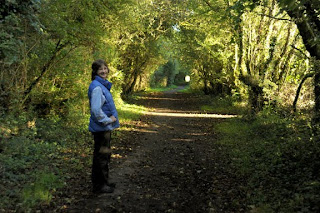 We went down to that exact spot early the other morning, to tell it all about the book and how it had a starring role therein. It was quietly pleased, and whispers rustled up and down the old road all the time we were passing underneath the interlacing branches of hazel and willow. 'Did you hear? Did you hear? We're in a book. Yes, the old road and the old ways, and everything. We're not forgotten at all, so we're not. Everyone will know about us now.' It was a beautiful, quiet early morning. A flock of Connemaras (well, most of them were dapple grey, although I see now that none of those in this picture are) were grazing in some rough pasture by the water. Just look at this pony's perfect reflection. You can see his muzzle hasn't touched the surface yet, can't you - there isn't a ripple. 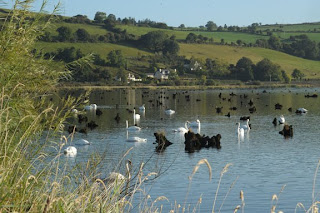 The mute swans were floating serenely among the ancient tree roots, only clue to the lost riverine forest that once shaded this whole area, making it a place of mystery and magic (OK, yes, and moonshine-making too). 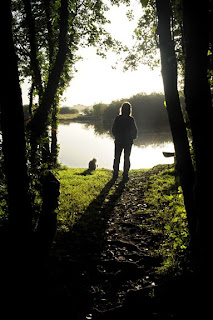 Even Sophy Wackles wanted to sit there for the day, and watch the mist rise over the reedsBut there was work to do, and it's been a busy few days. So much so that on Sunday, DH being out on a job, I called a rest break and took the selfsame Sophy down to the far far west, to visit one of our absolute favourite cafes. You could well call it the Cafe at the End of the World, since it's right out on Slea Head, beyond Dingle. 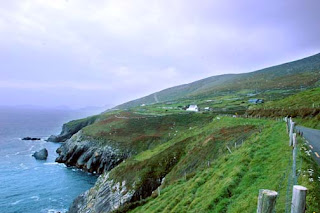 Getting there is definitely half the fun. The road gets narrower and narrower, and you'll find sheep wandering along the verges, taking their own sweet time, while you keep one eye out for the first glimpse of the legendary Blasket Islands on the horizon. 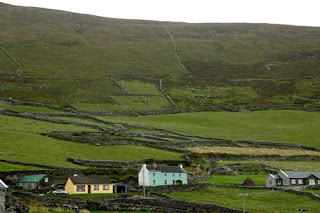 I love the poignant history enshrined in these old grey drystone walls, winding right up to the top of the high hills. They hold the memory of pre-Famine times when the population of Ireland was far higher than it is now, and every scrap of land, however poor, was desperately needed to grow food. Today the people have gone, but the walls still remain, echoes of the past.

There was no time to visit the prehistoric beehive huts, nor yet the newly restored Famine Cottages. They will have to wait for another day. We finally got to Dunquin and Sophy had a little walk down the lane before I headed into the Pottery for that long-awaited coffee and fresh scone. 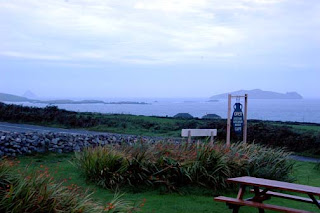 Here's the view from the window. A little oddly-tinted perhaps (the window glass has to withstand some pretty strong storms in winter) but you can see why it has to be a top contender for the Coffee-With-A-View award, don't you? That's The Bishop lying there in state on the right out in the Atlantic, also known as Inis Tuaisceart, one of the smaller Blaskets.

Wasn't time for a trip out to the islands either, though their lure was as irresistible as always, but in any case there was a strong wind getting up, and you do not, repeat, do not try going out to the Blaskets when the wind is up. Bad idea. And the tide was really really low too. 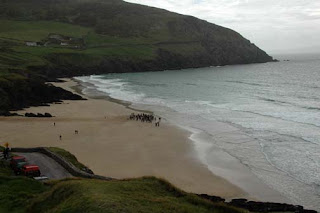 The small bit of road you can see in the foreground twists down to the tiny pier where you embark for the islands. But on Sunday the tide had gone so far out that the entire beach was exposed. The clear colour of the sand shows that this doesn't happen every day. I couldn't tell if that group by the water were waiting hopefully for a curragh or holding a secret ceremony. They were a long way down and ours was a long road home. 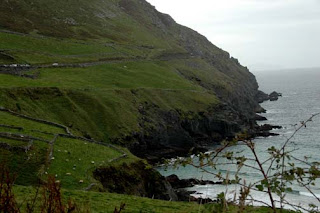 Here is the driver's view going the other way on Slea Head. In fact I took this picture from the window as I waited in a lay-by for another car to get by. It doesn't do to be in too much of a hurry when you're out at the end of the world.

Edited, later in the day, to add: Hey, the O'Brien Press have added an interactive link on the web page, so you can browse the first few pages of De Book, and, and, AND -

Through the Cornfield to Kilcrea Castle is there! Go look!

Aren't they poppets? Oh, and they've posted your review from Amazon on their page too, Angeluna! I think they simply couldn't resist such a lovely piece.
Posted by Jo at Celtic Memory Yarns at 9:21 am

You do realize that after reading this lovely book, we are all going to be looking for real estate in Cork?

O'Brien's was most efficient, and shipping was indeed quite reasonable. Highly recommend.

It was amusing to me that in such a disparate group as my knitting friends, we were all drawn to the same photos. Those woods and that ancient path through the crops to the castle.

Love joining in when you and Sophie go awandering.

I know what I want for Christmas.

It's my Christmas present and here already, so I missed the signing, but that's okay since I have a book in hand at least. It's beautiful and I can't wait to read it.

Thank you so much for the link. I had intended to purchase but would much rather support the small firm.

I'm Sue Nagle, I would love you to sign my copy if there is still time.

Oh, dear, I wish I had known about the signed copy option. I already have my copy (Amazon seemed to be out for some reason, so O'Brien Press received my patronage), too.

I gave it to myself for my birthday and felt the cockles of my heart warm page after page at the sight of ancient paths, craggy cliffs, looming green hillsides, and defiant stones. Thank you so much for such a lovely window on a lovely land.

Too late for an autograph. I got my book yesterday after ordering thru O'Brien Press.

We once sat in our car there and listened to The Archers! I remember feeling that you couldn't listen to it any further west in Europe. Was I right? Is that the furthest point west in Europe?

More beautiful pictures and the excerpt on O'Brien's site was wonderful. I am so glad that I have one coming to me.

Thanks for going to the trouble of signing them for us.

Congratulations on your book - it looks lovely. We have very happy memories of our holiday west of Cork, though we didn't make it to the Skelligs as it was blowing a gale. So a return visit is inevitable.

All so beautiful, and I can deeply feel the spirit of the place through your words and pictures.

Every time I see a Connemara -- even a photo -- I catch my breath. They are very special creatures indeed.

Did you ever try to maximize your free bitcoin collections with a BTC FAUCET ROTATOR?