The Ghost Train of Drimoleague and the Donkeys of Ceann Tuaithe

Thought we'd better catch up on local matters and things knitterly after all that travelling and bearwatching. Been busy this past week, not only with the demon book but also with dyeing and skeining and generally getting into a tangle with trying to do too many things at once (don't we all?). 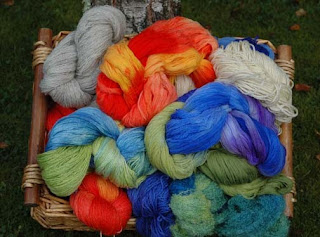 Oh incidentally, while I think of it, my friend Ana who lives in Bulgaria, and is one of the keenest, as well as one of the most talented knitters around, has just opened an Etsy shop so that she can sell some of her beautiful finished projects. If you're looking for something gorgeous and don't have the time to knit it, go look. I think she'll even knit to order - now's your chance to get that perfect sweater without all the work! Ana is Shenevski on Ravelry if you're a member, and I'm constantly amazed at the beauty of the pieces she turns out. (Which reminds me, must finish that copycat black cashmere cabled vest inspired by hers.) 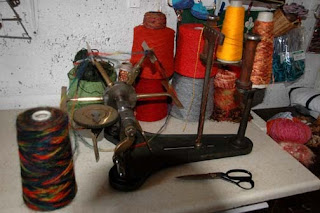 Been working that 19th century sample-skein winder pretty hard too. This is the one I bought from Warren at Craftspun Yarns - or, more truthfully, forced him to sell to me. It works so smoothly and beautifully it's a pleasure to use. But it will only measure in yards, not metres. Which is why the new, limited edition, Samhain Shawl Kits, also up on eBay, are made up in lots of little 50 yd skeins. 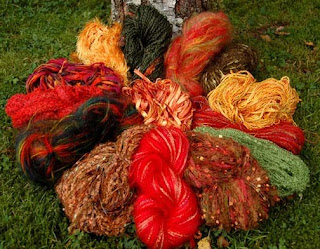 Fourteen of them to be exact, some singles, some doubles, some triple-plied, totalling 700 yds overall. All tucked into a nice strong plastic envelope. Great fun. Kits in blues, greens, turquoises, reds, browns, will follow. I see people using these for projects like Jane Thornley's lovely wraps and vests and shawls and things.


The garden is moving into its sleepy mode at this time of year, but the little crabapple tree is still showing off its tiny crimson fruits. 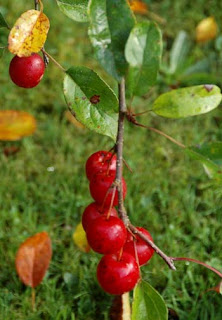 They're only the size of large cherries. I must pick the whole crop (might fill a very small cereal bowl) and see if I can make a miniature pot of jelly with them. 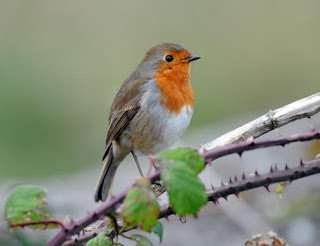 The resident robin is getting very aggressive too at this time of year, seeing off any foreign immigrants ('this garden is taken, TAKEN, do you hear?') while the local wren is coming into the tiny straw birdhouse tucked high up in the porch at night. There is much swearing and fluttering if you go out unexpectedly after dark, so we have to try to remember to take the dogs out the back door.

May have mentioned that the bright pink boucle EZ Ribwarmer was started and completed on the Yukon trip, but you didn't really see a good picture of it. 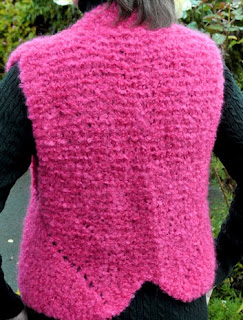 Here's a nice back view. I'll put both views up on Ravelry when I get a minute. This Blogger is temperamental enough and I've got enough pictures to show you tonight without tempting Fate too far. 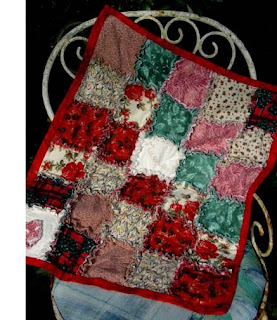 And a new little girl baby friend arrived a week or so ago, so of course she had to have a cosy raggy flannel quilt with her name on it, didn't she? You probably can't see 'Maeve' embroidered in the centre patch, but it's there. And yes, I did make a last-minute error in placing those patches, being in a rush, but I don't suppose she'll mind. I do like raggy quilts. Especially in warm snuggly flannel. Must make some more.

But a fine day arrived, and DH had some free time, so the book took priority. Down to Drimoleague first, a small and at first perhaps ordinary West Cork inland village. Acting on information unearthed though, we took a right into a car park in the centre of the main street. Once you'd got in a little way, this opened out suddenly and unexpectedly, and revealed - 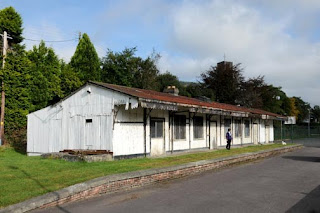 Grass was growing on the platform, the ticket office was boarded up, the rails and sleepers were long gone, but the station was still there, dozing in the sunshine, with one ear open for the clang of the bell which would tell it that the down train from Cork with visitors, or the up train from Bantry with the butter, was due.

This is a remnant of the legendary West Cork Railway, whose demise in the sweeping modernisations of the trendy 1960s is still a cause for much lamentation throughout the county. Indeed, mention it in any pub from Bandon to Ballydehob and you'll soon have half a dozen voices clamouring 'It should never have been closed', 'We should get it back', 'Wouldn't it be grand altogether to travel in it now?' and more.

I like to think that the West Cork Railway is still alive in one dimension, and that on misty winter nights you can perhaps hear the shriek of the whistle and the drumming of the rails as the late down train pulls into Drimoleague Station. Doors slam, elderly ladies in the traditional hooded West Cork cloaks lift their heavy baskets to the platform, the station master comes out of his office, pocket watch in hand, and the voices of those long gone echo once more around the station yard. Actually I do believe in ghost trains. Don't you? Or, put it this way - wouldn't you like to? 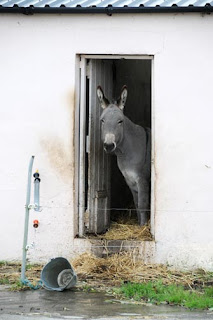 On our way out of Skibbereen we came across this rather annoyed donkey who had just petulantly kicked his feed bucket to record his annoyance at being kept indoors. Note the electric fence placed strategically close to his stable door. Donkeys, as you probably know, are veritable Houdinis when it comes to escape skills. You just can't keep one in if he wants to get out. So far this farmer's strategy is working. So far...


We were on our way down to Cunnamore which is where you catch the ferry to little Heir Island, hardly any distance offshore but a bit too far to swim. 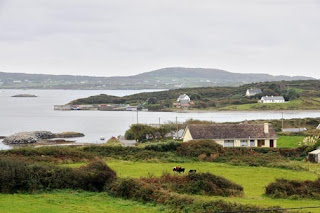 That's Heir Island in the middle of the picture there, looking down from the hill above Cunnamore Quay. 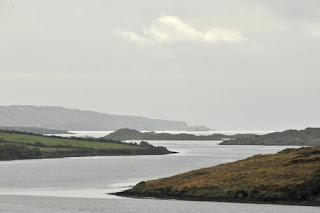 Heir Island used to be famous for its boatbuilding and its lobster fishing. The local men would fish up and down the coast, staying away from home three weeks at a time, and cooking all their meals on board. They even made bastable bread in a pot oven on deck! 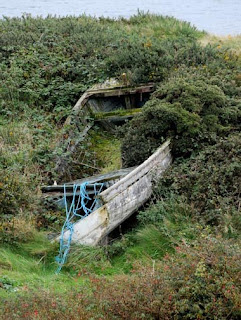 I suppose you could see this as a sad reminder that those rich fishing days are gone, but in another way it's rather nice. This old boat, veteran of many a stormy sea and dangerous tide, now rests snugly within sight and sound of the ocean, tucked behind a headland and wrapped warmly round with furze and long grass. No bad way to be. 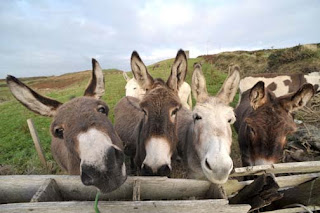 It was a donkey day definitely. This gang of comedians ('Ooh, a Nikon, take my picksher mister!') were enjoying themselves out on Ceann Tuaithe (anglicized inexplicably as Toe Head which is a dreadful misnomer - Ceann means Head certainly, but Tuaithe means a clan or community gathered under one chief, not toe for heaven's sake! I mean, it's not even attractive, is it?) 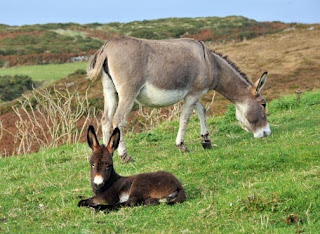 This little fellow was attractive though. He was probably thinking what a strange place the world was that had two legged creatures looking at him over the fence and cooing.


Wherever you are in West Cork, you're sure to find, sooner or later, a grassy lane leading down to the sea. In this case, giving a fine view of the Stags rocks. 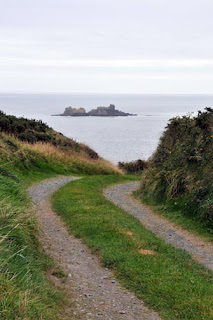 A nice place to be on a quiet evening as dusk falls. And indeed nice to think about at other times, when you need something peaceful. Feel free.
Posted by Jo at Celtic Memory Yarns at 5:01 pm

Good to hear from you...I always enjoy your adventures.

I'm sure it's a safe bet to say that I am not the only individual anxiously awaiting the next installment from Celtic Memory Yarns and this one did not disappoint in the least! Your yarn and projects are ever-so-lovely and the photographs... Outstanding. Thank you for providing the rest of us with such an intimate and special look into Ireland's little crevices! Until next time :)

This certainly cheered me up this morning whilst on my coffee break...

lovely donkey, and the wool inspiring...!!

I love the read your posts, they are so full of life and the dearest photos. It's such a treat! My favorite photo this time has to be the one of the group of donkeys. I have the "I wants" and wish I could purchase more of your yarn, but I've had a financial set back and won't be able to for now (sniff, sniff). It's funny because I actually frogged a single sock that I had made with your merino bamboo and am working it now in the Monkey socks pattern, it is turning out beautifully!!!

Your train station reminded me of Spirited Away. Miyazaki believes in ghost trains!

Why so many donkeys in the area? Are they the train's replacement? :)

*sigh* You're making me long to make a return trip to Ireland. If you keep this up, you may find a strange guppy on your doorstep with a bag full of knitting and all her camera gear.

Another great post, Jo. Thank you so much for sharing your Ireland with us.

Love your donkey photos....especially the baby! And the petulant looked up one!
But - your friend's etsy shop - are her prices for real??????? Did I read them correctly? Becuase they appear to be quite the bargain! Beautiful beautiful work!

What an adorable baby donkey!

And is the bird your local robin variant? If so, it never occurred to me that it'd look so different from ours here in the States.

We almost went to Skibbereen to live back in the early 80's. But then DH was found to have got cancer so we thought we'd better stay where health treatment was free!!!!
I still hanker after it....

I so enjoy these photo tours you take us on!

Jo,a wave of "Can't wait to return to West Cork someday" just hit, very hard! As always, wonderful, I must remind Kimberly to read this one and catch up with your travels.

A long low train whistle off in the distance evokes a mournful yet soothing sound to me. We have the deight of hearing it nightly just after 11:30 as we snuggle down to sleep, simply lovely. Robins are the dearest little birds in your neck of the woods, so cheerful and pleasant looking. Sweet little creatures. Thank you for sharing.

I live in that little railway village and sadly it's not the only thing gone. Sadly only the very young and the old live there now. Sadly rural Ireland is in reality pretty grim.