Well You Make My Day Too - All Of You!

I was totally taken aback, but very very touched by so many people giving me the You Make My Day Award! I have a personal rule not to take part in these pyramid happenings, but couldn't help being warmed to the heart that there are such numbers of you who like reading my weblog. Thank you so very very much.

I can say with heartfelt sincerity that all of you out there - yes, all you webloggers, commenters, readers, designers of competitions, designers of wonderful patterns - get my personal accolade for making life so much more fun since I discovered this strange addictive world of knit-net. From the first day I nervously searched for Blogger and followed the confusing instructions, things have never been the same. (There hasn't been enough time for any of the things I used to do of course (gardening, reading, housework, ironing, shopping, grooming the dogs...) but you can't have everything, can you? Was there really a time when Ravelry didn't exist? When I didn't exchange chatty emails with dozens of like-minded knitting friends? When there was no one with whom I could discuss a difficult pattern, an awkward stitch, the project from hell? What did we all DO before blogging? (I know I've said this before, but it strikes me afresh at times like this.)

Take a great big bow, everyone who has ever posted a blog entry, made a comment, contributed in any way whatsoever to this huge happy StitchnChat we have created. You are all wonderful. You ALL make my day! And my week, my month, my year!

Saw our local vet the other day, Conor, and he insisted I call into his surgery on my way home. He wanted to show me his new baby. 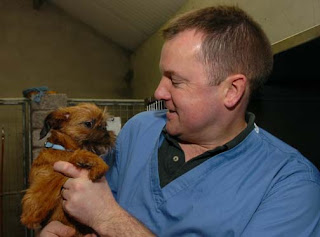 This is Spencer. He's a Griffon Bruxellois, albeit a very small one, since he's only a baby. Don't you just love that sulky expression? The appropriate phrase in Ireland is, 'Would you look at the puss on him!' 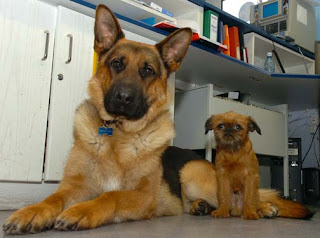 Here he is with Iasco, Conor's regal Alsatian. Spencer apparently sleeps curled up between Iasco's front paws, but declined to do so while we were there with the camera. In fact I don't think he has quite got the hang of a photoshoot yet. There's time.


Now, believe it or believe it not, THE RED AND GREY SOCKS ARE FINISHED! Hallelujah! 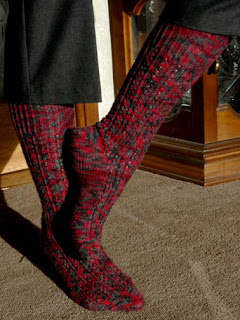 Stayed up really late one night to finish them (well, it was after midnight and for early bird Celtic Memory that is extremely late). Did so well on the using-up-every-last-inch-of-yarn that there was barely enough to bind off the cuff of Sock 1. Sock 2 had a miniscule ball left over - mustn't have divided it up totally equally when it was wound off the skein into two balls. But then again, a few yards of yarn wouldn't weigh more than a gram, would they? (For heaven's sake, CM, will you decide for once and for all whether you're imperial or metric? No I will not. Why should I?) Anyway, these socks reach almost to the knee (increased a little as the leg went higher), and are finished off with a few rows of 4x2 cables to give entertainment to my kneecaps. Very cosy indeed in the wet wild and windy weather we're having.

Gosh, we actually had snow the other morning! It didn't last very long of course, and barely whitened the grass, but it was real snow. Took a quick sequence with the baby camcorder, and if I can work out how to insert a clip into the blog, I'll show you genuine snow in West Cork (a rarity indeed). Lene, you put a video clip on your blog, of Tina rolling in the snow. How did you do it?


Anyway, the snow made the idea of the Wollmeise wristlets seem far more sensible, so one got finished. Cast on for the second, but at the same time got the inspiration for a neckwarmer made in somewhat the same style. Now the sources for this inspiration must be openly declared: Wollmeise's wonderful wristlet pattern of course, but also HPNYKnits, who showed this marvellous neckwarmer on her blog. For those with long necks, like HP and myself, such a design is ideal, wrapping you in snug warmth while at the same time making a fashion statement. So HP, I hope you don't mind my snatching up your lovely notion (buy you a coffee next time I'm in NY, ok?), and Wollmeise, I hope you're pleased that your ingenious wristlet design inspired me to use it on something else. 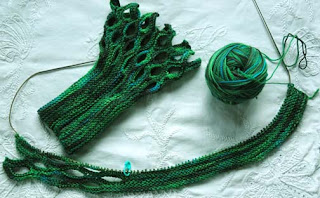 Here is the first wristlet finished, with the start of the neckwarmer lying below it. The plain section will wrap around the neck and meet with the slashed section. It will fasten with nice decorative buttons like HPNY's, and then the idea is that the slashed lacy section will fall downwards in a graceful fold. Currently experimenting with making the points gradually longer as the piece grows.

Yes, it's a lovely colourway, that Cherry Tree Hill yarn, but just look at what arrived in the post from Angeluna. 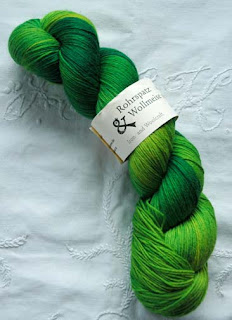 YOWZA! Real Wollmeise! Did you ever see such brilliant colours in your life? And the camera really really does not do this baby justice. How does she get those shades? Clearly my life has been wasted up to now. From henceforth, I shall have to devote myself entirely and totally to the pursuit of Wollmeise yarns. If the greens are like that, what on earth are the blues like? And the reds? And -

And - yes, there is going to be every need for all that sock yarn, so you can just stop giggling. I know something that will put a stop to your smugness.

Sock Madness 2 is waiting in the wings!

To anyone who took part last year, who cheered on the sidelines, who stared in horror as each new devilish pattern was released, who stayed up past midnight, lived and knitted through snowstorms and power cuts, heatwaves and monsoons, endured every disaster that could happen (sometimes several at once) and still came through, those words will strike a chill to the heart.


But at the same time, they will induce a strange sense of exhilaration, a feeling of excitement, of anticipation, of impatience. There is something about Sock Madness that works - works so superbly that it makes everyone taking part jump through the most unbelievably difficult hoops, even while muttering, 'I can never do this, don't ask me, I can't, you hear?'


So it's extremely good news that they're going to allow more entrants this year - it won't be limited to the first 128. What are you waiting for? Log on now and find out more. Believe me, you will never ever forget the experience. I'll see you there.


Oh yes - another project got started in the past week. This time it was the fault (it's always someone else's fault, not mine, how could it be mine?) of the UK magazine Knitting. Now normally I find this publication a little too mumsy, too old-style for my liking, compared to the cutting-edge journals like IK, but this time it had an absolutely stunning pattern for a black cropped cardigan which was exactly the design for which I had been searching. 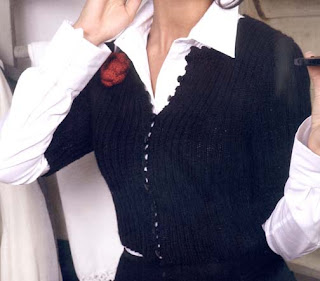 And, although one could hardly credit it, I actually had the perfect yarn in the stash. Inca alpaca from Yarn Paradise. 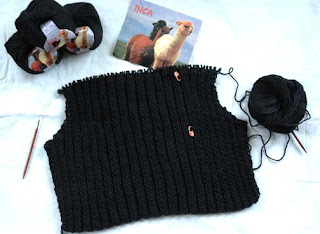 This picture was taken yesterday; the back is now finished, and one of the fronts is half done. Got to ensure that the enthusiasm stays at full heat until it's complete. This is a garment I actually want and will wear immediately - unlike some projects where it is the challenge that attracts, or the charm, and the heck with whether it is something one would ever put on other than on a very dark night when dating an elderly gentleman with eyesight problems.

The writing commission currently on the computer is one absolutely after my own heart. It's a feature piece for Ireland of the Welcomes, a glossy that circulates principally in North America but also in the UK and the Antipodes. DH and I often do pieces for it. For the May/June issue they have agreed to take a piece on the woollen industry in Ireland. Some history of course, since we have been exporting wool since prehistory, but then featuring the different stages of production from sheep farming through collecting fleeces to spinning and weaving and finally to a yarn shop. Kind of nice assignment, huh? Of course you already know most of the participants from these postings - you saw them first! Remember Daniel P. Buckley? And his wonderful dad, John-Joe? Andrew Eadie at Kerry Woollen Mills? The Kissanes of Moll's Gap and their Adopt-A-Sheep project? And of course Jean and Jo at the Little Yarn Shop in the Far West, aka Spin a Yarn. It isn't often that a writing commission is pure pleasure, but this one is. And DH has been having fun digging out all the pictures. 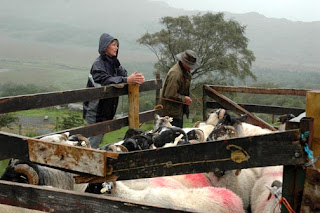 If it goes some way towards helping all of them to continue doing what they and their forbears have done for generations, then one will have done one's bit.
Posted by Jo at Celtic Memory Yarns at 9:17 pm

Hooray, Jo! The red and grey socks are smashing! :0)

Stunning new socks! I look forward to receiving my copy of Ireland of the Welcomes. It's always nice to read your work and gaze over the photographs taken by your DH. Have a good one!

May I assume that you are feeling frisky again??? Love the red/greys. Love, love the wristlets and the jabot neckwarmer thingy. Totally approve of the alpaca jacket! Glad the Wollmeise arrived. If you knit really, really fast, you could have the perfect socks for St. Patrick's day.

And Spencer is hilarious. Conor will laugh every time he looks at him.

Oh, you should do a bang-up job on this article!

wonderful socks:) and that wollmeise yarn oh my Angeluna why have you started her ladyship on another obsession???

The wristlets intrigue me. What do they look like on? Model one for us? :D

Love the socks! They look like they would be very warm and comfy.

I started these wristlets but just never got them finished. My yarn isn't quite right and I wasn't up to the challange of the adjusting. It's a yummy pattern.

Its a good thing I did not have my afternoon tea in my cup when I read 'imperial or metric'. That was laugh out loud funny Jo.

I can't get the wristwarmers. I need to see them on.

The beautiful Wollmeise looks like springtime in Ireland. And I adore the juxtaposition of the dogs!

Another round of Sock Madness! Are you mad? It's a good thing that your knitting mojo seems to be revving up to full speed ahead. :-) Not much reading time in the days ahead.

Hope your article will be a good boost to Ireland's wool industry.

Dogs, socks and green yarn in the same post. Oh yes -- there's a reason you make my day!