My last posting was on Friday the 13th (no mishaps, fortunately). Saturday afternoon, around 3.30 pm West Cork time, THAT PATTERN arrived. Round 4 of Sock Madness was under way! From the original 128, we were now down to just sixteen, and from Norway to Australia, Ireland to America, frantic knitters were casting on, checking gauge, working the rib, swearing, frogging, working it again, swearing...
I'd chosen a very nice soft wool/angora blend that I had dyed recently into a rather lurid blend of pinks and greens. The yarn had been smooth all along, but once I started knitting, the constant touching and pulling made it fluff up quite dramatically, giving it a halo effect.
This contest is all about speed and stamina. Because the pattern is released early morning in the States, it doesn't arrive in European mailboxes until mid afternoon, which perhaps gives the Statesiders a bit of an edge on the long-distance dash. I gave up at midnight with exhausted eyes and stiff fingers, but resumed at dawn with renewed energy.
This was an interesting pattern, Mad Colour Weave, with entertainingly slipped stitches forming a zig-zag pattern across the sock. This also meant that it took forever and beyond to work. I thought I'd got my sock time down to two days per pair, but this took me through Saturday, Sunday and well into Monday morning before I could at last heave a sigh of relief, photograph the darned things, and post them to Flickr as proof that I had indeed finished. 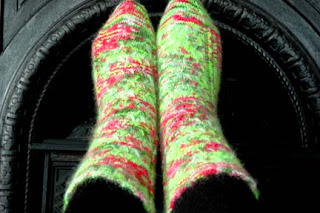 You can really see that fuzzy angora effect around the cuffs, can't you? 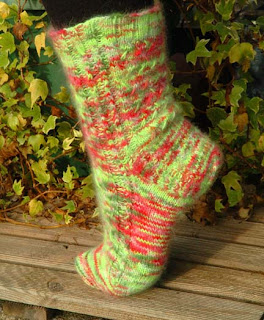 Here's a side view, showcasing both the cunning little cable down the side (a devil to work, I can tell you) and the lurid colour (oh it was nothing, really, just a dab of this, a dab of that...)
I beat my worthy Sister in Socks, Tezzcan, by a narrow margin, and so I'm the idiot who goes on into Round 5. Honestly, you'd think I'd learned my lesson by this time, wouldn't you? This isn't just hard work, it is terrifying, obsessing, dump-everything-else-and-forget-the-day-job work. There was so much to be sorted that I had ignored all weekend that I did the only possible thing. I tucked Sophie into the car and headed for Inchigeelagh.
There is a very nice road - more of a narrow boreen really - that runs off at an angle through the countryside near Inchigeelagh. I've known it as 'The Brown Rabbit's Road' since I was a child - I think my mother named it that originally, and we all seized on it delightedly. 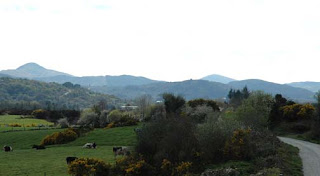 You can see for miles into the far distance, to the blue hills and beyond. See that mountain sticking up on the left? That's Shehy, the fairy mountain. It is very magical indeed, 'airy' as the country folk would say. The King of the Cats himself lives there, and there is a door into one of the big Fairy Forts there too, if you can find it, from whence the Good People ride forth to hunt and hold gatherings at times like Beltane and Midsummer. I was told when I was tiny that sometimes the top of Shehy is pointed like a fairy's hat, and sometimes it is flat, which is when you know the Good People are abroad and you'd need to mind youself in case they'd take you away. I believed it absolutely. Sometimes I still do - especially when the clouds are down covering the peak, and it looks flat.
The sheep and their lambs were everywhere. This little black one was quite impudent when I stopped the car to look at him, although his mother and sister were more wary. 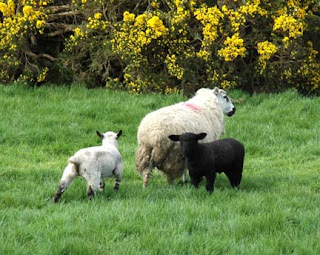 That's the gorse in full bloom behind them. The sun draws out its wonderful coconut scent and the glow of its bright yellow flowers sets the hillsides flaming all over West Cork at this time of year.
I did some dyeing when I got home (anything to put off the myriad unfinished tasks). I tried the microwave method which is great fun, as long as you don't burn your fingers in the steam, and got quite slaphappy trying this effect and that with different concoctions. The best thing about microwave dyeing is that you can get it done so quickly, and then wash the yarns and have them hanging out in the sunshine in no time. 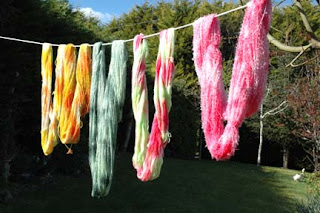 Look at this lovely surprise I got from Charity today! 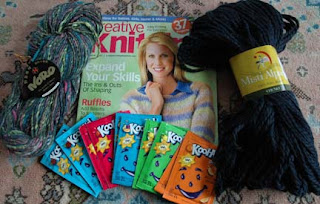 What a nice thing to do, to pack these up and send them all the way from Northern Canada. And oh did she know my preferences! Beautiful Noro Silver Thaw, utterly seductive Misti Alpaca Chunky in navy, the latest Creative Knitting, and even some Kool Aid in wonderful colours. I am going to have such fun with those! Charity you are an angel.
More tomorrow or maybe Saturday. Some great ideas fermenting in the Celtic Memory brain about crop cardis, Austrian kneesocks, and merino-tencel blends (none of these related). Would DH notice, do you think, if I were to order 10 kilos of merino/tencel yarn? (I understand it's cheaper in bulk.) Maybe I could get him out of the country for a day or two when delivery was expected.

Posted by Jo at Celtic Memory Yarns at 9:35 pm

tCongratulations on going on to round 5 in sock madness. I'm glad it's you and not me.

So proud of you with this Sock Madness thing and your last socks are lovely and...well...neon. You have become a master sock knitter in no time flat.

Love your "road" photos. Really, you live in the most utterly beautiful place. And those lambs!

For Kool Aid dyeing, there is one color which you can use to turn all the others more subtle, and that is tamarind. It is hard to locate, but if I find myself near a Mexican grocery, I will look for it for you.

Well done on moving into the next round! And blessings n sharing how you recover from the insanity. Your photos and local lore are lovely. Good Luck in the next round!

Congrats on moving on to round 5 - I think. It sounds utterly frantic trying to get the pattern knit while watching the clock. But I am quite fond of angora-and-anything yarns, so I would happily have knit along with the yarn you used!

Your round 4 socks are lovely! Congratulations on moving on to round 5. There's a web page with several of the colors you can get from KoolAid that is kind of fun to check out if you want somewhere to start your own experiments.

I'm de-lurking to say that I absolutely adore your story about Shehy Mountain, and all your stories about the Irish countryside. I've been reading for months and really enjoy your blog. Thanks for writing it.

I finished a sock tonight at knitting and everyone laughed at my elf toe - until I tried it on and they saw that my feet have very long pointy toes and it goes right over my big toe... if it is sunny tomorrow I will take a picture...

Whoa nelly, you're still knitting socks at warp speed. With sizzling colors like those no wonder they knitted up quickly despite the tricky pattern. Congratulations on surviving another round!

I seem to remember bits and pieces of the Shehy lore from a fairy tale book I loved as a young child. The countryside picture calls out to be roamed and explored.

Congratulations on moving to round 5! I've been enjoying your progress. Well done, you!

i love those socks! not lurid at all; in fact they look like a mass of new geraniums (my favorite pink-on-green flower)
and good for you, getting so far with sock madness; only a year ago you were stugglin so with socks!

Jo, your socks look so cheeful and cozy - love the fuzzy halo!

Let's see, it's about 5:30 in Ireland now as I write this so you are probably in the thick of things with your new pattern. This is really knitting as an endurance sport (a knitathalon?). I'm sure you are speeding along already.

Thanks again for the great photos and the wonderful story! Too bad the lambs won't look very lamb-like by the time we get arrive.

As long as the sanity's only temporary... Congrats again on finishing; I'd say you'll need to be in the master sock knitter section for the next go round!

I so adore your photos and lore -- you've a knack for making it all very real, and this city dweller quite appreciates being shown that potholes and rush hour and hurry up and wait aren't necessarily reality.

Angeluna, if you happen to read this comment, thanks for the tip re tamarind -- I'm planning on a round of Kool Aid with a bunch of 2nd graders, but I'm thinking that, for my own at least, I might prefer colors that are a tad less "berry bursting"...

I recently started reading your blog and enjoyt it very much! Thanks for sharing!

I do hope one day to travel to Ireland, with my bike and my yarn!

Congratulations yet again Jo on completing another round :) I did try and do this one but had problems re size & frogged it and then life just got in the way !!
Good luck in the next round