Frog Is Definitely a Four-Letter Word!

You get those projects, you definitely do. Starmore (cross fingers and shudder) was the last, and perhaps I'd relaxed a bit, forgotten about the suffering and the pain as one is inclined to do in post-traumatic stress disorder recovery. I didn't have an inkling, when I announced happily to all and sundry that I was going to try the Michael Kors Aran sweater featured on the cover of the fall issue of Vogue, that this would turn out to be one of THOSE.

I swatched in my beautiful natural silk/cashmere. I swatched again. I went down a whole size in needle (heck it was narrow enough at 4.5mm I would have thought, I could barely see the 3.5mm). Eventually I managed to get a swatch which measured slightly less than that suggested in the pattern.

I'd done a bit of homework you see. Oh I've learned a few tricks the hard way. I ran around the Net, surfing little knitting waves here and there, and found a few other people who'd tried the Michael Kors. Big, they all admitted. Very big. Not just roomy but huge. Yeah, well, it does give the measurement for the XS as 44" chest, which is kinda large. Which is why I was trying to make a swatch measuring less than the given size. Which I did.

So I cast on an awful lot of stitches and worked away diligently on a particularly tasking type of twisted rib - not only k tbl but p tbl as well, and if you've ever tried to purl through the back of the loop, you'll know it isn't something you can do with one eye on a television documentary and the other on a small Pekingese tearing something suspiciously familiar to pieces in the corner of the room. But I persevered. Until half way through the requisite number of rows I began to suspect that there was more here than called for. Where the heck is the measuring tape? Why is it that you can own a dozen or more tapes and still never be able to find one? Where do they all go? Have they a secret rumpus room where they hold measuring tape parties?

But I ran one to earth (looking slightly guilty on the stairs, where he had no business to be) and checked. Yep, worst fears realised. This was way wa-a-ay too big. B-r and b-l - no, no, stop that. Tsk tsk, how tiresome. And so we come to Frog Number One. 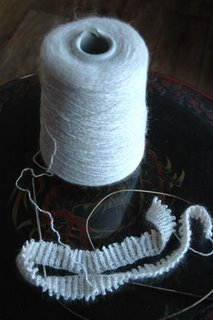 Here are all those painfully-worked little stitches yanked off the inexpressibly tiny needle (yes, it was down to 2.5mm for the rib, let's hope this doesn't go any lower) and slowly, slowly being frogged back and rewound on to the cone. I hate doing this to such a classically beautiful yarn as silk/cashmere. It doesn't do it any good. And no matter how careful I am, I can never get the last few inches of the cast-on row unripped, so it inevitably ends up in Muffy's collection bowl, where I keep all the odds and ends of yarn to make into an attack ball for her.

Oh hell. It can't be. Surely not. Call on DH to hold down one end of the wiry little circular while I take a quick measure. Rowlocks and bollards! Now it's too narrow! 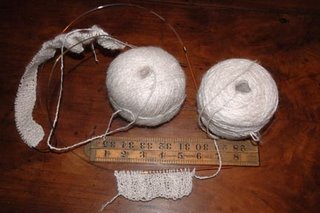 Here is the second frogging session about to start. In the meantime, to allow cooling-off time (the woodburning stove was burning merrily and I did cast a longing eye towards its flames once or twice while clutching the offending ribbing, I will admit), I grabbed the 3.5mm and did yet another small swatch.

Yes, I realise that ribbing on a finer needle will measure less than the main body of the work on the larger, but this ribbing was seriously behind in the inches stakes. It wouldn't have reached across my body, no way. More rewinding, more grimy inches in Muffy's collecting bowl.

I am now on to Phase Three and keeping my fingers crossed. I don't even want to put up a picture of the work in progress, in case it's bad luck. I'll keep you posted.

Oh, and in the meantime, I went off the Michael Kors design. Too many stitches, too big, too much adaptation required of a pattern that wasn't that great anyway. What I really wanted was a simple, classic, cabled polo, reasonably figure-hugging, so I decided to design my own. If you want it done properly.... A simple pattern of k4, p 1, cable 4, p 1, k 4, etc. It should look very nice. If I ever get past the ribbing, that is.

Enough of these stressful matters. Let's turn to nicer things. We've been having very cold weather here, with even a tiny sprinkling of snow on the Kerry mountains. 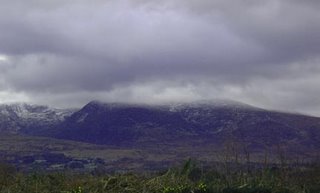 We've had some wonderful sunrises too, with the whole sky glowing molten gold in the last few minutes before dawn. 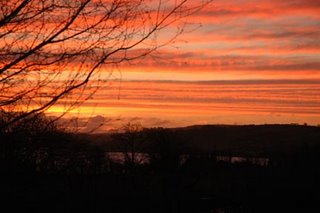 And then, when the sun actually peeks above the horizon, the sky pales and brightens over the lake. 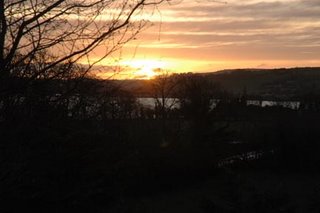 Although it's been perishingly cold here today (by Irish standards), and the ice didn't even melt on the pond, so I had to put out dishes of water for the birds, nevertheless when you looked out from the upstairs sitting room window you would swear it was spring already. 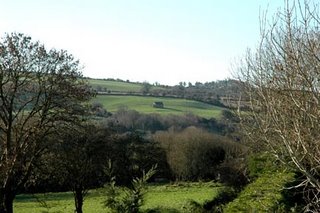 Can you see a tiny house in the middle of the far distance, alone in a huge field? It really is a tiny deserted cottage with nothing whatsoever around it. Predictably we call it the little house on the prairie and I say hi to it whenever I look out. We walked up there one day last summer to look at it - a fair distance across hedges and streams and bogland too it was. The cows keep it company when they're grazing around there. Sometimes I think of it when I'm in bed at night and send it good wishes.

But back to the knitting (retourner a nos tricots?) Talking away as I was about that Michael Kors sweater which now isn't a Michael Kors sweater, I conveniently managed to forget that there are already waiting patiently in various places around the house:

Item. The Travelling Cables cardi, in a thicker silk/cashmere, about the pattern for which I raised such mayhem until the blessed Angeluna located it for me and posted it on. The back well begun.

Item. The Celtic Vest, in a poppy-red lambswool, again pointed out to me by Angeluna as an ideal project (she was right), and eventually run to earth in a back issue of Interweave Knits. A third of the way up the back.

Item. The Blackberry Pie socks, in a wonderful natural-dye yarn from my dear friend Ms Knitingale. Both half-way down the leg.

Item. The Norah Gaughan asymmetrical charcoal alpaca crop jacket, about which I enthused so wildly all over the place. Most of the back done.

Item. Oh I'm getting depressed. I haven't seen those others in months anyway and out of sight out of mind. As long as I don't start anything else I'm all right. Just keep working away.

Gosh, has anyone else seen that gorgeous asymmetrical sweater from Berroco, illustrated in their advert in the winter issue of Vogue? 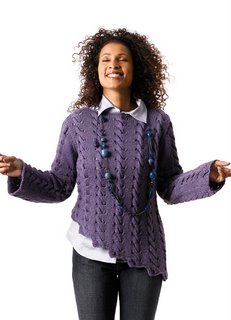 I went hunting for it, and it's a free pattern called Tierra which you can download from their website! Don't you just love that angled edge? Now if I just had the right shade of lavender/purple in a smooth yarn to show off the cables...

Oh shut up! I was only looking!

Posted by Jo at Celtic Memory Yarns at 8:54 pm

Can't leave you alone for a minute, can we? Honestly...

I'm still chuckling, Jo, about "where pattern?" comment on my blog. Not to worry, Dear. HERE pattern:
http://www.magknits.com/Sept05/patterns/jaywalker.htm Delightfully easy, totally free. I am feeling your pain on the Michael Kors sweater. So lovely, but man. How in the world is 44" an xs?? And I have precisely the same problem with the last few inches of a cast on edge. I don't know what it is, but anymore I rarely even bother trying to unravel it. I know it won't cooperate. Give Miss Muffy hugs for me, and good luck on that sweater. I'm thinking all kinds of good energy your way.

Oh dear, gauge insanity again. So sorry. I just did a project, changed yarn to do a second one, measured, measured, swatched, measured, calculated, double-checked, cast on...and of course it is 3" wider than it should logically be (27" instead of 24"). Which I've decided is just fine with me for this piece. Though it wouldn't work for M Kors. But the whole gauge thing is a recurring mystery for me. My vote, finish the red Celtic Vest first. It will go fastest and be quite satisfying and you can wear it while you work on the others. And everyone will admire it.

Wonder if you could get Muffy's bits and pieces to felt into a ball?

Good luck to you on whatever you choose to work on next. Richard...loved the photos!

Better you than me. I'm keeping my plate clean for something special that's coming in the mail....

Who are the owners of the cottage on the hill, and when can I move it?

That red morning sky unfurled its warning for all to take notice.

Some projects just aren't meant to be, no matter the visions, others will drag their heels, while yet another continues to be shy and dodge the limelight preferring the shadows of a cozy basket.

Oh Jo, I have these certain skeins of yarn that never work with anything... I have often wondered why is it so. No matter what project, what needle size, the gauge is off and the love never appears and the skein gets frogged so many times it is almost useless in the end... I have put them into paper bags for years but even the long marinading in the stash has not helped. In some of these difficult cases I have taken the yarn to good will and have never known if they have been any use of...
This does not make sense to me, I have been knitting for more years that care to think of, and this mystery is unsolved. But I guess it is as in some other fields of life as well, some answers you never find. I have stopped asking why, and quietly accept the fact and every now and then drop off bags of yarn to good will.

I love Tierra too but hadn't gotten around to finding out anymore about it, thanks for the link,I've just printed off the pattern so I can go upstairs and find something really nice to use (I know I've got at least two alternatives saved for this very moment)

...and here I am cussing because I have to frog an inch or so of sock on itty-bitty needles and hope I can pick up the sts beforehand, or grab 'em when they're loose if I fail, without umpteen of 'em zinging off on their own. My sympathies! Lovely sunrise pictures; much swooning was done. And thanks for mentioning the Tierra, I've got to go look at that! (And the necklace.)

Maybe write the names of your UFO's on slips of paper and pick one out of a hat? Might pique the interest again for in between non-Michael Kors knitting. Possibly. ;)

Go with the vest and keep warm in it while you knit the rest of the stuff. Blackberry pie socks second.

Jo? About that cottage? I can smell the peat fire from here. Surely you need a humane officer in West Cork? When can we move in?