It's December And Not A WIP In The House Finished!

December 1 is always like a wake-up call - only 24 days to Christmas and everything still to do! (I know, those of you in the States start your festivities earlier, with Thanksgiving, and then just carry on through to January, but we're only getting panicky now).

I'm a sucker for all that Christmas stuff and I don't mind admitting it. I love the decorations and the excitement and the excuse to decorate the house with stuffed reindeer, and putting a Santa suit on my aged teddy bear. I love buying little gifts to stuff into stockings, and making up hampers of goodies. I love most of all the holly and ivy and the scent of a fir tree being brought into the house.

Actually I really really love Midwinter, which was the original festival before somebody from Rome decided that it would be a good idea to hijack the old pagan events and somehow persuade everybody that these really commemorated Christian things. I love to imagine people gathering together to celebrate the turning of the year, looking forward to the gradual increase in daylight, risking the sacrifice of one of their carefully-fed hens or geese, sharing out a few handfuls of dried fruit and nuts from the essential stores, as they garlanded their homes with evergreens and drank a toast to the coming of the sun once more.

I finished putting together a special one-off skein of yarn as a prize for the Red Sweater KAL last night, and this morning was notified of the winner, Kelly in Canada. I bet it's colder where you are than here, Kelly, but I hope you haven't had it so wild and windy. The last few days have been frighteningly stormy, with trees down and power lines, and some roads blocked or flooded. We even lost a tree in our own garden - well, it's probably more true to say that it gave up the ghost finally - it's a chestnut and had been dead for some time, but I couldn't bear to cut it down. Now, however, it's leaning against its still-standing brother, and I'm consoling myself with the double thought that (a) it will make wonderful firewood and (b) now I can plant another apple tree!

(And by the way, Karen, thanks for the excellent advice, but have no fear. I already have a fence of rowan trees planted right around the garden, with the apple trees inside those just for extra protection. Evil spirits would have a job getting through.)

Heck, I was supposed to be telling you about the red yarn - or Red Branch (K)Nights as I christened it. 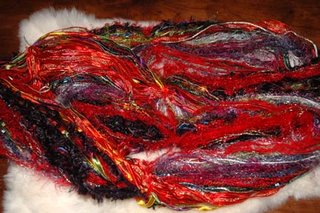 Here it is, ready to be packed up and sent off to Kelly. Cheerful, isn't it? It was a lot of fun to make.

However, it also reminded me that I was rather behind the race, to put it mildly, in the Red Sweater KAL. I know, I know, it isn't a race and there isn't a time limit, but by now I should at least be some way into the project. Several things militated against that, most of them starting with the letters S*T*A*R*....

I found a battered and grimy cone of what proved to be a lovely pillar-box red, skeined up a triple-strand yarn, and washed it. It came up beautifully. 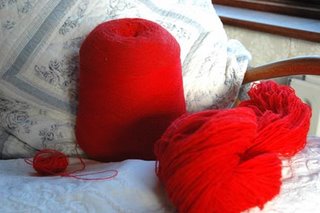 If you peer very closely you might be able to see that the top part of the cone is still darker and grimier, while the sides, which have been revealed by winding off some yarn, are beautifully bright. This is a pure lambswool from Scotland and very fine, hence the necessity to use it triple. But it works up to gauge for the Celtic Vest beautifully - that one in Knitter's of Fall 2003 designed by Elsebeth Lavold (they call it Cul de Sac in that issue for some reason but it's a Celtic Vest as far as I'm concerned.) 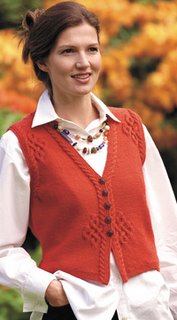 Haven't got very far yet - only really cast on for the back an hour or so ago - so nothing to show, but will work as fast as possible so that I can at least hold my head up among the maddeningly virtuous lot who are finishing off their works of art at a great rate.

That's of course if I don't get sidetracked by all the other projects on the go. Like the chunky charcoal crop cardi to my own design. 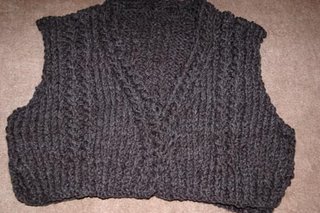 I've been taking my time over this, as there has been so much else on, but honestly you could make this little baby up in a weekend - the ultra-chunky yarn is so quick to knit up, and you need so few stitches. I'm working on a sleeve at the moment, straight, no shaping (which will make it look almost bell-shaped when it's done). It's really short too, well above the waistline. No bare midriffs for me, though - brought up in a more sensible era, I don't think I could do that in midwinter. A slim-fitting ribbed jumper in white or maybe pink would be about right, I think.

I was thinking of Lene's daughter dancing in The Snow Queen up in Lapland this week and wishing I could be there. It must be so magical. Dark yes, cold, yes, more than most of us could imagine here in mild Ireland, but magical too. Good luck, daughter of Lene, and enjoy every moment of it.
Posted by Jo at Celtic Memory Yarns at 9:28 pm

I really like your little cropped cardi. Your design is terrific. Great color, too. Sending you wishes for extra swift fingers on the Celtic Vest. Has anyone ever knit using a sheath? That is supposed to really speed things up. Worth investigating.

Your Winter Solstice yarn is gorgeous. Lucky Kelly in Canada.

I do hope that Lene sends a full report with photos of her daughter as the Snow Queen. Sounds magical.

Jo, I am so with you on MidWinter/Solstice celebrating..have many memories of just such celebrations...some I've dreamed, surely from past lives, at least I like to think so.
Red Branch Knights is so beautiful, Kelly in Canada is very lucky,indeed.
I just love that Celtic Vest (I'm with you on the title) will have to search for that issue...
The chunky crop cardi is looking great!

20+ days but who's counting? What gets done, gets done. One thing at a time. Lene has the right idea.

Still, a house filled with the scent of evergreen, and gingerbread is so welcoming.

Ah - it's gorgous Jo! I'm usually so reserved in my knitting, that this will be a flashy little treat to work with. I have no idea what it will become... yet. Perhaps I'll need to fondle it awhile for inspiration. Thank you so much.

Alas, we have been wholloped by our first real taste of winter today. It has been late in coming, but Ottawa is now layered with a crust of ice pellets and freezing rain on top of some early-morning snow. The season of ear-flap hats and hot chocolate begins!

I've always liked that red vest and I think it would look great on you. I haven't tried to make it, because I'm not sure I could get a good fit. I'm always having to consider where I could put extra material in the chest area.

oh that red is going to make a super Celtic Vest (I like that name better too) We had some wind and rain today but it seems to be calming down now. I sat home while hubby and friends went to the dinner tonight -- DH (no standing for dear right at the moment) gave me the stomach flu that is going around - that he had before me and is now feeling good. So in addition to feeling blah and running back and forth to the bathroom - I am feeling sorry for myself :(

That tree will make wonderful wood for the stove .

Thank you for the good wishes Jo! It is dark, the daylight just visits briefly around noon.

(One is not allowed to take pictures during the show, so I can only encourage you to look at the www.lumikuningatar.eu -pages, that page is translated to English.)

That red vest is so beautiful!

The Countdown has begun in our house, too, and not a single Christmas decoration is to be found yet! Sad, really.

Lucky Kelly! That beautiful yarn will push away the winter cold!
Love that red lambswool - how could anyone not love red?
Still loving the chunky sweater, Jo. Hope you are writing up the pattern as you go, probably you are and that is why you are feeling the pressure of the coming holiday! Chuckle!
I would go with you to see the beautiful Snow Queen, but it seems to me that Lene mentioned that they were lacking snow in her last post. Wonder if she would take some of ours - slightly used, wet and dirty! Probably not!
Can you pick your own holly in your garden?

Hi I absolutely love your work is there any way of obtaining your patterns??? I am prepared to pay any amount that is how much i love your work!!